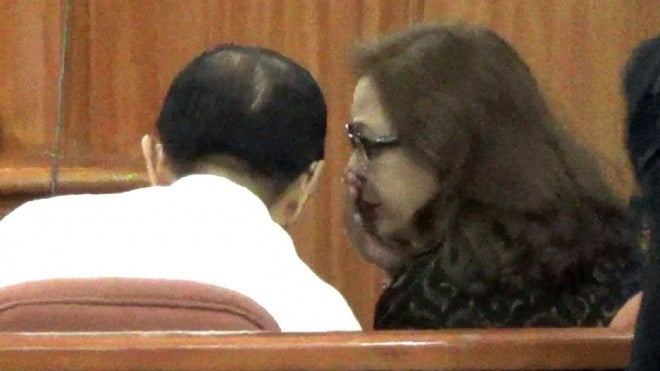 In this September 2014 photo, Sen. Juan Ponce Enrile and aide Gigi Reyes converse during their hearing at the Sandiganbayan. The antigraft court, in its denial of the bail petition of accused “pork barrel” scam mastermind Janet Lim-Napoles on Friday, says there is compelling evidence Reyes has received kickbacks for Enrile from the scheme. INQUIRER.net PHOTO

Lawyer Jessica Lucila “Gigi” Reyes received the kickbacks for Sen. Juan Ponce Enrile in the course of the alleged pork barrel scam, according to the Sandiganbayan’s denial of the bail petition of accused mastermind Janet Lim-Napoles.

In the 249-page resolution penned by Presiding Justice Amparo Cabotaje-Tang, the antigraft court third division said the prosecution had not yet established that Enrile directly received the commissions from Reyes in Napoles’ alleged scheme of pillaging lawmakers’ Priority Development Assistance Funds (PDAF) to ghost projects for kickbacks.

The court gave credence to the testimony of socialite Ruby Tuason, the alleged agent of Enrile and another coaccused Sen. Jinggoy Estrada, on delivering kickbacks from Napoles.

Tuason had testified that she delivered Enrile’s share in the commissions to his chief of staff Reyes.

None of the prosecution witnesses, however, saw Reyes hand over the money to Enrile.

But the Sandiganbayan said Tuason’s testimony was “more than compelling evidence” that Reyes acted as a “middleperson” for Enrile and received kickbacks on his behalf.

“The information in this case alleges that Senator Enrile and Atty. Reyes conspired with each other ‘and with Janet Lim-Napoles’ in amassing, accumulating and acquiring ill-gotten wealth,” it added.

The court further said the testimonial evidence pinning Reyes as Enrile’s agent was enough to prove that plunder was committed.

The court noted that while none of the prosecution witness saw Napoles, Reyes and Tuason hand over the money to Enrile, it did not absolve Napoles from the weight of evidence which showed her “unseen hand” in the “grand conspiracy.”

The court said the prosecution witnesses, who were former employees of Napoles in JLN Corp., had shown Napoles’ “unseen hand” in the scheme of forming bogus foundations to pilfer lawmakers’ PDAF.

“Thus, the receipt by Atty. Reyes, who was likewise a public officer at the time material to this case, of the said ill-gotten wealth is sufficient to establish that the crime of plunder was indeed committed and that the accused Napoles played a stellar but perfidious role in this grand conspiracy,” the court said.

“Unquestionably, the prosecution was able to expose by clear and convincing evidence accused Napoles’ unseen hands in this so-called pork barrel scam. Accused Napoles did not only exert moral ascendancy over her employees in engaging in this scam; she likewise actively participated, and actually materially benefitted, in the misuse of public funds,” the court said.

The court said based on the evidence presented, Enrile’s PDAF “were diverted to the personal accounts of accused Napoles.”

“From these funds, Senator Enrile and/or Atty. Reyes received a fixed percentage in the form of commissions/rebates. In fact, they received rebates before the checks issued to the NGOs could even be encashed,” the court said.

“The office of Senator Enrile, through (deputy chief of staff Jose Antonio) Evangelista, signed accomplishment reports, reports of disbursements, inspection and acceptance reports to make it appear that the projects funded by the PDAF of the said legislator were legitimately accomplished, although in truth, and in fact, they were an utter sham,” the court added.

The antigraft court third division unanimously denied Napoles’ bail plea, but Associate Justice Samuel Martires said the prosecution had yet to establish a conspiracy among the accused.

Martires said he concurred to deny the bail plea but on the basis of Napoles being a flight risk. He cited Napoles’ turning fugitive as she faced a serious illegal detention case filed by principal whistle-blower Benhur Luy. Napoles hid for 14 days before surrendering to President Benigno Aquino III.

While Napoles had been denied bail, her principal accused Enrile, 91, was granted temporary freedom by the Supreme Court on humanitarian grounds.

Napoles and her coaccused Sen. Ramon Revilla Jr. were denied bail in the First Division hearing their plunder case last December 2014, while her bail petition with coaccused Estrada had been pending in the Fifth Division.

She filed her bail petition for plunder in Enrile’s case on July 2014.

Napoles was sentenced to life imprisonment by the Makati Regional Trial Court in connection with the serious illegal detention of Luy, who exposed her alleged dealings with lawmakers. Luy was Napoles’ entrusted finance officer.

Napoles is a coaccused in all the plunder, malversation, and graft cases involving three senators and former representatives. Marc Jayson Cayabyab/RC