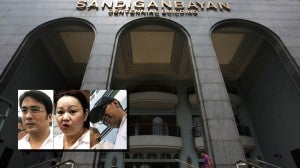 This after the prosecution proved that the evidence of guilt is strong in their moves against the granting of the bail plea of the accused who are all detained for plunder, a non-bailable offense.

“In fine, the prosecution has duly established that there exists strong evidence that accused Revilla, Cambe and Napoles, in conspiracy with one another, committed the capital offense of plunder… and are thus not entitled to the constitutional right to bail,” according to the 71-page resolution of the anti-graft court first division.

“However, the court cautions that such conclusion shall not be regarded as a prejudgment on the merits of the case that are to be determined only after a full blown trial,” it added.

In a statement, Revilla, who is detained for plunder, said he is disappointed that the court junked his bail motion.

“We’re very disappointed. It was not the outcome we were expecting especially when we consider the facts and the evidence. Ganunpaman, wala naman tayong magagawa kundi igalang ang pananaw ng hukuman. Hindi pa tapos ang laban (Nevertheless, we have no choice but to respect the court’s opinion. The fight is not yet over),” the senator said in a statement.

He added that the court’s decision will not dampen his resolve to prove his innocence.

“This is a setback but by no means determinative of our resolve to clear my name. Kung hindi pa ito ang panahon para mangibabaw ang katotohanan, darating din ang tamang panahon (If this is not yet the time for the truth to prevail, the right time will come),” Revilla said.

“I was shocked. I did not expect the bail to be denied. Nasira naman natin ang credibility ni Benhur Luy (We were able to destroy Benhur Luy’s credibility),” David said.

State prosecutor Joefferson Torribio said now that the court junked Revilla’s bail motion, it is time for them to prove that the senator’s guilt is beyond reasonable doubt.

“We are happy with the decision. It’s now time for us to present our evidence-in-chief to prove that guilt is beyond reasonable doubt,” he said.

Principal whistleblower Luy, who was at the Sandiganbayan for the bail hearing of another co-accused Senator Jinggoy Estrada, said he felt vindicated that the court junked Revilla’s bail plea.

“Natutuwa naman po ako kasi totoo naman ang mga sinasabi ko (I am happy because I have been telling the truth),” Luy said before he was whisked away by security.

The prosecution and defense summed up their arguments last November 20, when the court also submitted the bail motions for resolution.

In his summation, Torribio had said they were able to show overwhelming documentary and testimonial evidence that the three accused can be charged for plunder.

“We submit that with all documentary evidence and testimonies, we’ve not only presented high probability but the accused can be charged for plunder and that our evidence is overwhelming,” Torribio told the court.

“This case before us represents the biggest corruption scandal in our country in 2013,” he added.

In his summation, Revilla’s lawyer Joel Bodegon had said the prosecution failed to present evidence that Revilla had a direct hand in the scam.

Bodegon added that the whistleblowers led by Luy did not testify that they directly transacted with Revilla about his kickbacks.

“All the prosecution was able to present are suppositions, conjectures and hearsay evidence,” Bodegon told the court.

Napoles’ lawyer Dennis Buenaventura, meanwhile, said in his summation that the prosecution failed to prove that Napoles directly gave Revilla his kickbacks personally or through his bank accounts.

The court’s denial of the bail motions then gives way to the formal start of the trial proper on the corruption scandal.

The court took this long to decide on the motions due to the volume of documents of evidence. The Supreme Court in its circular had wanted the anti-graft court to resolve pending bail motions within 48 hours.

Revilla is detained at the Philippine National Police Custodial Center with Estrada, whose bail hearing remains pending, and co-accused Cambe, his legislative officer. Senator Juan Ponce Enrile, another accused, meanwhile is under hospital detention. Napoles is locked up at the Camp Bagong Diwa female ward.

Read Next
Bomb joke costs doc $90,000
EDITORS' PICK
A delightful blessing!
Gov’t plans to open COVID-19 vaccination for 5- to 11-yr-olds by January 2022
Gov’t eyeing COVID-19 vaccine booster for essential workers, indigents by Dec. 10
Villar Group gears up for AllValue Shopping Party on Dec. 3; around P 1-million promos and discounts up for grabs
Omicron variant detected in more countries as scientists race to find answers
Legarda: Ending Violence Against Women, a cause for all
MOST READ
Quiboloy warns of ‘much worse than Omicron virus’ if his ‘persecution’ is not stopped
Suspected Omicron cases mild, says leading S. Africa doctor
Bongbong Marcos’ conviction in tax case not a crime involving moral turpitude — lawyer
Marcoleta defends pol ads on ABS-CBN
Don't miss out on the latest news and information.