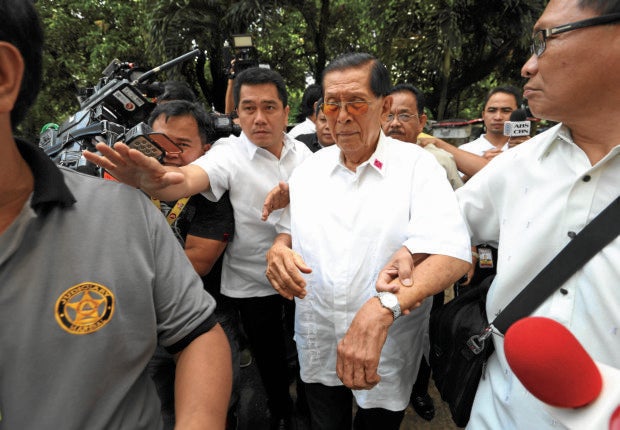 In this Sept. 11, 2015 file photo, then senator Juan Ponce Enrile appears at the Sandiganbayan for his trial for plunder in connection with the congressional pork barrel scam. Now a former senator and out on bail on humanitarian grounds, the 93-year-old Enrile wants the inhibition from the case of Sandiganbayan Presiding Justice Amparo M. Cabotaje-Tang. (INQUIRER FILE PHOTO / NIÑO JESUS ORBETA)

In a 15-page motion dated May 26, Enrile, through top defense lawyer Estelito Mendoza, described how Aquino bypassed Tang’s seniors when he selected the junior justice to head the anti-graft court on Oct. 7,
2013.

Although the motion stated there could “hardly be any doubt” as to her qualifications, it cited the “subconscious forces,” which could affect the verdicts in “the momentous cases she decides.”

It quoted a three-page portion of United States Supreme Court Justice Benjamin Cardozo’s classic 1921 book, The Nature of the Judicial Process, which described the “subconscious forces” that shape a judge’s thought processes.

Part of the quote read: “Deep below consciousness are other forces, the likes and the dislikes, the predilections and the prejudices, the complex of instincts and emotions and habits and convictions, which
make the man, whether he be litigant or judge.”

During a Thursday hearing, Tang gave prosecutors a non-extendible period of 10 days to comment on Enrile’s motion. He will in turn be given another seven days to reply to the comment.  SFM/rga