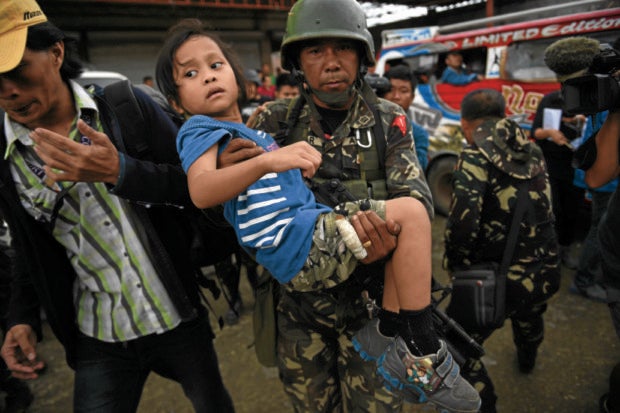 An evacuated child is carried by a Philippine soldier in Marawi on the southern island of Mindanao on May 31, 2017, as fighting between government forces and Muslim militants rages on the ninth day. Philippine security forces have killed 89 Islamist militants during more than a week of fighting in a southern city but the gunmen are still offering strong resistance and holding hostages, the military said on May 31. AFP

Unicef Philippines has called on involved parties in the Marawi conflict to ensure the safety and protection of children affected by the ongoing fighting there.

The conflict has left at least 24 civilians dead, including one child, and tens of thousands displaced since May 23.

In a statement, the agency also called for the undisrupted access of children to essential healthcare, nutrition, water and sanitation services as well as protection and psychosocial recovery support to aid their early return to normalcy.

Unicef estimates around 50,000 children have been affected by the conflict by being displaced within Marawi or to other cities in Lanao del Sur and Lanao del Norte; unable to return to their homes; or are in dire need of basic health and sanitation facilities.

“We are deeply concerned about actions that may put children’s life and safety at risk and disrupts their overall development or access to basic social services such as education and health care. The estimated tens of thousands of children who, along with their families, have been displaced in and out of Marawi, could face severe long-term impact on their psycho-social health, their physical health as well as having their education disrupted,” warned Unicef Philippines Representative Lotta Sylwander.

Sylwander also expressed deep concern that some of the children may have been used in the armed conflict, either as combatants, camp accessories, informants or as human shields against government forces.

Working with its partners in both national government and the Autonomous Region of Muslim Mindanao (ARMM) and NGOs, Unicef stands ready to assist local government agencies and civil society in the delivery of basic services to the affected communities in and around Marawi  and encourages local organisations to provide similar services to children and families who would need them.

With the academic year resuming across country in early June, Sylwander called on the Armed Forces of the Philippines and local government agencies to ensure schools in Marawi City and surrounding areas re-open on time, without delay. “Schools provide support to give children a sense of normalcy on their return, and gives easy access to children and their families for more specific interventions and services,” Sylwander added.

Media reports cite that the ongoing conflict has resulted in at least two elementary schools burned down and severely damaged health clinics and homes in Marawi.

Sylwander also urged local governments and law enforcement agencies to clear the areas surrounding schools and pathways to residential areas of any unexploded booby traps and IEDs as well as other remnants from the conflict. “It is very important to keep children away from harm and injuries as they travel back to their communities or to their schools,” Sylwander said./rga