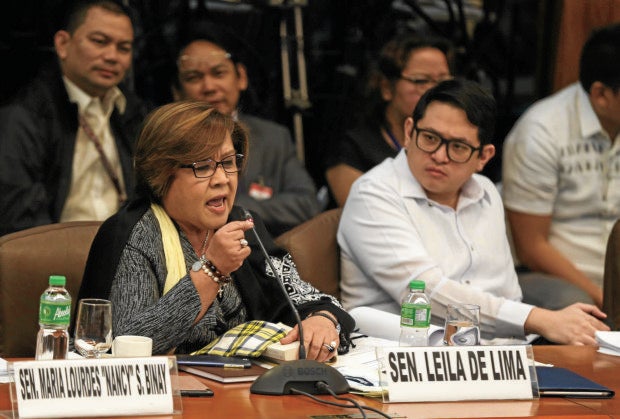 The House of Representatives justice committee has approved a show-cause order to have Senator Leila de Lima explain why she should not be cited in contempt for supposedly preventing her driver and former lover Ronnie Dayan from testifying in the Bilibid drug probe.

During the reopening of the inquiry in aid of legislation on Thursday, committee chairman Oriental Mindoro Rep. Reynaldo Umali approved the seconded motion to have De Lima explain why she should not be cited in contempt.

The committee issued the show-cause order against De Lima despite the interparliamentary courtesy rule between the two chambers of Congress to respect each other.

“The continuing snub of Senator De Lima, to my appreciation, is an affront to a coequal chamber which is the House of Representatives,” Umali said.

Umali approved the motion even though De Lima is his sister in the fraternity.

The committee issued the show-cause order following calls from lawmakers to have De Lima cited in contempt for allegedly obstructing justice after Dayan’s daughter Hannah Mae claimed the senator ordered his father to hide from authorities and snub the hearings.

Dayan’s 23-year-old daughter said De Lima had blamed Speaker Pantaleon Alvarez for orchestrating the smear campaign in the guise of a congressional hearing on the whims of President Rodrigo Duterte.

“We cannot prevent the Senate to also do this thing. Ang mangyayari diyan pwede i-detain yung isang senador, madidetain din ang isang congressman. Masisira yung interparliamentary courtesy (What would happen in that situation is, we could detain a senator, and the Senate could detain a congressman. This would violate interparliamentary courtesy),” Alejano said.

Leyte Rep. Vicente Veloso, a former Court of Appeals justice, said whether or not Congress can hold a senator in contempt, the issue would definitely reach the Supreme Court.

ABS Rep. Eugene De Vera, the congressman who moved for the motion to issue a show-cause order, said there is a need for De Lima to explain why she prevented Dayan from testifying in the House probe.

“We’d just like to protect the integrity of the House of Representatives, at the same time, give the Honorable Senator to also have the chance to explain if there is truth to the matter that she prevented in any way the witness to testify before this Honorable committee,” De Vera said.

Justice Secretary Vitaliano Aguirre II said aside from contempt, De Lima may also be liable for immorality and concubinage for having an affair with a married man, which may result in her disbarment.

READ: Aguirre: De Lima may be liable for concubinage, immorality

Dayan was arrested in La Union around 11:30 a.m. last Tuesday after he was cited in contempt for snubbing the House of Representatives inquiry  on the proliferation of drugs at the New Bilibid Prison implicating De Lima.

During the turnover by the police to the House of Representatives Tuesday night, Dayan admitted receiving drug kickbacks from Espinosa for De Lima, an allegation the senator said was a lie.

De Lima has vehemently denied the allegation, pointing out that allies of President have an ax to grind against her since she has crossed swords with Duterte. De Lima as human rights chair investigated the alleged links of Duterte to the Davao Death Squad when the latter was mayor.

De Lima has admitted having an affair with Dayan but said both of them were separated from their spouses at the time. De Lima has also expressed fear Dayan might be forced to testify against her. RAM/rga