Dayan: De Lima asked me to hide after House subpoena 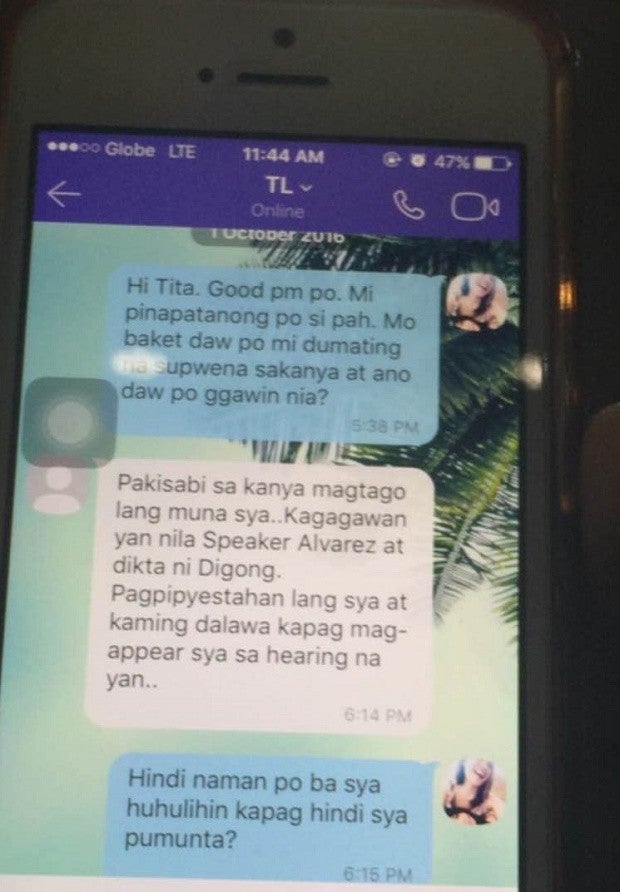 Sen. Leila de Lima’s former driver and boyfriend Ronnie Dayan on Thursday said the senator asked him to go into hiding when the House of Representatives justice committee subpoenaed him for snubbing the hearings on drug proliferation at the national penitentiary.

Dayan, who said he himself wanted to attend the ongoing probe, said he asked his daughter Hannah Mae to text De Lima to ask what he should do after his sister received a subpoena from Congress. He said the senator was not replying to his text messages so he asked his daughter.

Citing the supposed text message, Dayan said De Lima did not want him to show up in the hearings because they will be both embarrassed. He said De Lima’s text message to his daughter was sent on Oct. 1, 6:14 p.m.

Dayan’s daughter Hannah, who requested to maintain her privacy, showed up at the House inquiry on Thursday, wearing a cap and her face covered with scarf.

Majority Floor Leader Rudy Fariñas asked the 23-year-old Hannah to show before the lawmakers the series of exchanges with De Lima in the mobile phone she used. The phone was also showed to members of the media.

Hannah said she immediately replied and asked De Lima if her father would not be arrested if he would not show up, to which the senator allegedlt answered: “‘DI ba nagtatago naman siya?”

Dayan, who was cited in contempt for snubbing the congressional inquiry, was arrested in La Union on Tuesday. Both Dayan and De Lima confirmed their previous relationship.