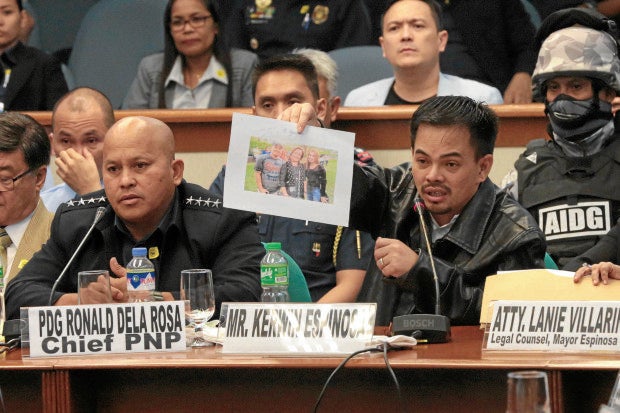 BAGUIO MEETING? Confessed drug lord Kerwin Espinosa shows to senators a photo of his supposed meeting with Sen. Leila de Lima in Baguio to inform her that Ronnie Dayan would deliver P2.3 million to her in Manila. —GRIG C. MONTEGRANDE

Sen. Leila de Lima and  top police officials whom Espinosa said were on his payroll all denied wrongdoing.

The high police officials included those who participated in the Nov. 5 raid on the Leyte subprovincial jail where Kerwin’s father was killed.

“I do not know now whom to believe,” said Dela Rosa, nicknamed “Bato,” who unabashedly cried during the nine-hour nationally televised hearing in the Senate.

“I place in God the PNP. I love the organization … there are still many policemen who can be trusted,” he said.

Espinosa said that in exchange for protection, he paid off De Lima, retired Chief Supt. Vicente Loot, one of the top officials President Duterte had accused of involvement in the illegal drug trade, as well as three police officers who were implicated in the killing of his father, Albuera Mayor Rolando Espinosa Sr.

Espinosa, who fled the country in June fearing for his life after Mr. Duterte promised a relentless war on narcotics, finally faced the Senate committee investigating the death of his father during a police raid on the Leyte subprovincial jail on Nov. 5.

He detailed the network of protectors that he had built to shield his business, which earned him P40 million to P50 million yearly.

The 36-year-old, who said he went by the code name “Batman” in his drug transactions, also outlined how drug convicts were able to continue their activities while in jail.

Before Espinosa testified before the Senate committee on public order and dangerous drugs, his lawyer had sought immunity for him. Espinosa was captured in Abu Dhabi and was returned to the country last week.

Sen. Panfilo Lacson, the committee chair, said he would seek the approval of Senate President Aquilino Pimentel III for the immunity request on a motion of Majority Leader Vicente Sotto III, which was unopposed.

Among the people whom Espinosa said were on his payroll were:

De Lima—a total of P8 million through her former bodyguard and boyfriend Ronnie Dayan. He said he met her personally at Burnham Park in Baguio City in November last year after Dayan arranged it.

Supt. Marvin Marcos, director of the Criminal Investigation and Detection Group in Eastern Visayas—P3 million to fund the election campaign of his wife in May.

The biggest police official he named on his payroll was Loot, now mayor of Daanbantayan, Cebu province, who allegedly received P120,000 per month.

He said Laraga had recommended the payoff to Loot, then deputy of Provincial Region Office 8. “I gave General Loot money until his transfer to the Training Center in Camp Crame,” Espinosa said.

Espinosa said in August last year, Albuera police chief, Senior Insp. Jovie Espenido, told him that Dayan wanted to speak to him about De Lima’s need to raise funds for her senatorial campaign. He said it was Peter Co, an inmate at New Bilibid Prison (NBP), who confirmed that De Lima was seeking funds.

He said Dayan asked for P2 million but he could only shell out P700,000 monthly. Dayan called him to say that De Lima had agreed to the monthly P700,000 but wanted goodwill money of P2 million, which he delivered at the parking lot of SM Mall of Asia in Pasay City in August last year.

He said he was not able to give the P700,000 monthly because this time Dayan was asking for P8 million.

The second time he gave Dayan P1.7 million was at a restaurant in Dampa along Macapagal Avenue in October last year.

Espinosa said he asked Dayan if he could meet De Lima. Between Nov. 19 and 22 last year, Dayan arranged a meeting in Baguio City where Espinosa was to bring P2 million.

They met at Burnham Park and Espinosa said he brought his family along. De Lima was there, and Dayan introduced him as Batman.

He and his family had a photo taken with De Lima. “We shook hands after the picture taking and I whispered to her that Dayan has the money. Ma’am Leila just nodded,” Espinosa said.

Espinosa next gave Dayan P2.3 million in February this year at SM Mall of Asia.

Espinosa read most of the time from his 27-page affidavit. He said he began selling drugs in 2004 in Cebu City. He was arrested and sentenced to life imprisonment in 2005.

At the Lahug jail in Cebu City, he met four inmates dealing shabu, including Jeffrey Diaz, alias Jaguar, who was supplied by Lovely Adam Impal, who now lives in Makati City.

“I was able to save P1.5 million while I was in jail,” Espinosa said.

He was transferred to NBP, where he continued his business with another inmate, Co, who supplied him from 4 to 10 kilos of shabu. They distributed shabu in Leyte cities, such as Tacloban, Ormoc and Baybay, and Hilongos town.

He got out of NBP in 2010 and resumed his activities in 2011 in Leyte. He said he was shot and wounded by a rival, Tatang, who worked for a now retired policeman, Socrates Datahan.

Espinosa was jailed again in Ormoc City after he was charged with  illegal possession of firearms at the behest of Jaguar, who asked a policeman, Ramon Bolongaita, to file the case. “Jaguar and I were quarreling because he had an affair with my wife,” he said.

In jail, he said he met Wengweng Rosal and went into drug dealing again with the help of Senior Insp. Rio Tan. He said he gave Tan P15,000 weekly and the same amount to now Supt. Jose Estopin. He named two other Ormoc policemen who got P5,000 weekly each.