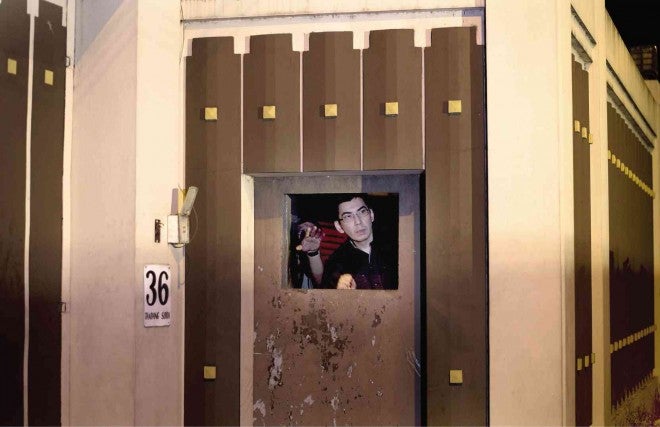 WHERE ANGELS FEAR TO TREAD After being incommunicado for almost two days, Angel Manalo finally speaks to the media camped out till the early hours of Friday outside his home on Tandang Sora Ave. in Quezon City. He denied his earlier claim that he and mother Tenny Manalo were held hostage in their home. But he also told reporters that corruption was rife in the sect. The INC spokesperson denied his claims of ministers’ abduction. AFP

Who is AE? Is he a lone blogger or different people expressing their views?

AE, or Antonio Ramirez Ebangelista, is some kind of Deep Throat within Iglesia ni Cristo (INC) whose blogsite, Iglesia ni Cristo: Silent No More, has drawn a following among INC members who are disgruntled about alleged irregularities in their church.

These members found one another through the blogsite and called themselves a core group.

Danica Rosales (an alias), told the Inquirer that AE is the voice of many INC members who had kept quiet for so long. AE’s strongly worded blog posts sparked outrage among the INC leadership but, Rosales said, the blogsite also galvanized members into voicing their gripes although anonymously.

And so, as INC prepares for its 101st anniversary on July 27, the indigenous Christian group that claims to have more than 2 million members has found itself wracked with internal dissension, with members questioning the integrity of some of its leaders and accusing them of corruption and abuse of power.

Concerned members cried abduction, arbitrary detention and expulsion without due process. They ran to the media, not to the authorities, for help.

The blogsite should open the eyes of “blind followers” of INC, said Rosales, who described herself as a member who remains loyal to her church’s teachings.

In his July 18 blog “Tyranny of Justice,” AE wrote: “A truly sad day for the church when ministers turn against other ministers so that their evil ways are not further exposed. Innocent after innocent ministers who have served the current and past administrations with all faithfulness, who have given their lives and energy for the church, are being punished because they are suspected of being me, or helping me, or sympathizing with the family of the late Bro. Eraño G. Manalo. All three ‘crimes’ are punishable by expulsion and, worse, disappearance off the face of the earth!

“Bro. Isaias T. Samson Jr., former editor in chief of Pasugo magazine, and his wife, Myrna, were expelled today, together with Bro. Jerson T. Samson Jr. and his family. Isaias and Jerson are brothers, both faithful and honest ministers, who have served the church for a very long time. Bro. Radel V. Cortez and Bro. Matt Pareja led the house arrest and the interrogation. Reports have surfaced that the Samson brothers were both tortured and harmed physically in a futile attempt to get a confession.

Where are they now?

“Another minister, Bro. Arnel Tumanan, has been placed under house arrest. Bro. Arnel was general secretary, a member of the Sanggunian (advisory council), during the time of our late executive minister, Bro. Eraño G. Manalo. He is loved and adored by brethren, including Bro. Eraño himself. He is reported to have been kicked and abused during the interrogation led by Bro. Radel V. Cortez.

“As some of you may know by now, nine of our ministers, workers and other brethren suspected of being either me, Antonio Ebangelista, or are helping me, have been dragged from their homes and held captive on orders from the Central Office. The ministers were abducted by armed men, some of them INC and some not, but all without conscience, animals who cannot differentiate right from wrong. They only see what they hope to gain, financially and otherwise, from this heinous act against men of God.

“The nine others were taken from Sorsogon, Meycauayan, Cebu and elsewhere and now believed to have been moved to Camp Karingal in Quezon City. One of the nine has been identified as Bro. Boyet Menorca, son of the late Bro. Lowell Menorca, former administrative secretary of the Sanggunian during Ka Eraño G. Manalo’s administration.”

In a press conference on Thursday, Bienvenido Santiago, INC general evangelist, denied the allegations of abduction and illegal detention.

“They allege that some ministers have been kidnapped. They want to make it appear that Iglesia is involved. That’s not true,” Santiago said, referring to the expelled Manalos.

Afraid for their lives

A member of AE’s core group, Rosales spoke with the Inquirer on Thursday, as news of the alleged abduction and illegal detention of members who had been expelled broke.

The unrest had been festering for some time, but INC members who wanted to air their grievances to the media feared for their lives and hesitated to speak out.

It was only after a video clip showing Tenny and Angel appealing for help and expressing fear for their lives that concerned INC members called the media.

Eduardo Manalo, the current head of INC, was reportedly behind the expulsion of his own mother, brothers, sister and several ministers from different parts of the country. Eduardo, the INC founder’s grandson and the third in the line of succession, took over as INC leader after his father Eraño died in 2009.

Rosales made it clear that “Mommy Tenny, Angel, and Lottie were not being held hostage but were merely afraid for their lives.” They also do not intend to leave INC because “they have nowhere to go,” she said.

But arbitrary expulsions—there is even “expulsion by text”—should be stopped, Rosales said.

Suspicion is rife, she said. For example, ministers’ wives are prohibited from doing Facebook, members are admonished about “liking” certain posts that “will make God ‘unlike’ you,” she said.

Rosales said AE was a real individual who had access to the INC’s inner sanctum.

“He moves around with members of the council. He’s some kind of an undercover,” she said.

Rosales herself hinted about why she knew much. She spoke about many changes in the INC that she thought no longer hewed to the teachings of the church’s founder, Felix Manalo. She pointed to the decisions of the seven-member advisory council that wields awesome power in the church.

Rosales spoke about the alleged wanton sale of INC properties, including one near City of Dreams on Roxas Boulevard and those in the United States because the church had financial difficulties arising from the construction of Philippine Arena.

Rosales, however, did not show proof of INC’s financial difficulties. But Angel Manalo mentioned Philippine Arena and decisions by the INC advisory council as causes of difficulties in the group in his interview with reporters early on Friday.

“That was not so in the past,” Rosales said. The church “never sold but only bought” property, she said.

Financial transactions used to be transparent, she said. “Now it is no longer that way.”

Rosales enumerated purchases, including “two choppers” and an “Airbus.”

“One minister even drives a Lamborghini,” she added.

“The families of these ministers fly on the INC Airbus for trips abroad and go on shopping sprees. They sport Louis Vuittons,” she said.

These jaw-dropping allegations cry out for investigation.

Ministers are not paid much, she said.

“We do not refer to their pay as salaries but as aid,” Rosales said.

Major cause of dissent

A major cause of dissent is Philippine Arena in Ciudad de Victoria in Bulacan province, inaugurated last year in time for INC’s 100th anniversary.

Often described as a showcase of INC’s power and wealth, the 55,000-seat Philippine Arena cost a whopping $200 million and has been declared the world’s largest indoor area by Guinness World Records.

“How can they recover the cost?” Rosales asked.

Holding concerts there that are not in keeping with INC’s teachings has raised eyebrows, she said, adding that last year’s New Year’s Eve concert by US R&B star Chris Brown that fell through was proof of how the venue was becoming a white elephant.

When INC members troop to the arena in rented buses, Rosales said, they bring packed food and drinks in order to save on expenses.

“What do the guards do? They make the people leave their drinks. The members should buy water sold by INC businessmen. Members are asked to sell tickets for events. During worship services they are asked to buy items on sale,” Rosales said.

Influential members have grabbed contracts, she said. For example, while there used to be many tailoring shops that made suits for the ministers, now the tailoring job is a monopoly, she said.

Rosales, however, showed no proof of the monopoly.

Rosales’ litany of grievances was unending, but so were her reminiscences of how things were when Eraño Manalo was the executive minister.

“He was very kind. If you came with a problem you did not leave without his advice. Everything was transparent. The collections were accounted for,” she said.

Rosales said it broke her heart to see Eduardo’s mother (Eraño’s widow) and siblings in a state of fear. On the video that she and Angel posted on YouTube, Tenny pleaded for a meeting with Eduardo.

Rosales said she remembered Eraño’s words: “I have not seen a disrespectful child who is blessed.”

Eduardo is Eraño’s eldest son, a third-generation Manalo who is the man on the block. While INC teaching eschews questioning the church’s head, Rosales said she believed Eduardo had a lot to do with the advisory council’s decisions.

She said she deemed questionable the restoration of the position for a “political liaison.”

The liaison is supposed to deal—or “make deals”—with politicians, she said.

It’s no secret that politicians make a beeline for INC headquarters during elections. INC members vote as a bloc.

While members may not file charges against fellow members, there should be room for investigation, Rosales said.

She gave the names of those whose activities need to be examined: General auditor Glicerio Santos Jr. and political liaison Eraño “Erdz” Codera.

Rosales did not specify why Santos and Codera must be investigated, but their names were mentioned in television interviews with aggrieved INC members.

“We no longer feel compassion and love. There is so much concern for wealth,” Rosales lamented.

Rosales cannot quite picture how INC will be after these trying times except to stress again the need for change in the advisory council.

She said she was not closing her mind to people power.

But she stressed that her faith in her church remains unshaken. But the events of recent days should be a wake-up call, especially for the “blind followers,” she said.

AE’s latest blog post to those who are tracking him down: “You have, once again, manifested to everyone your STUPIDITY, RECKLESSNESS, AND DESPERATION. You are scrambling to take anyone, ANYONE at all, whom you suspect might be AE. Well, I AM HE, and you have NOT and will NEVER be able to get me. I am protected by God Almighty…”