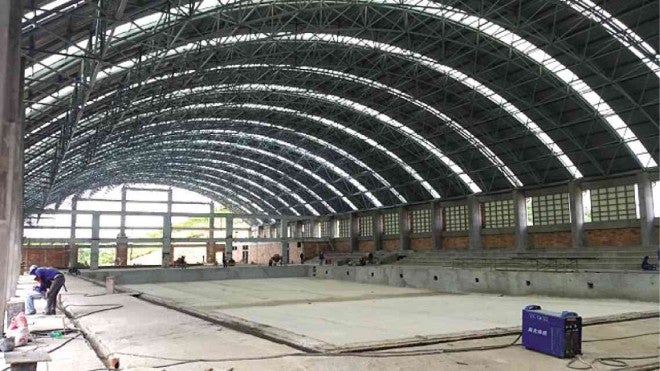 THE SEMIRARA Mining and Power Corp. is building an indoor Olympic-size swimming pool for its employees and residents of Semirara Island. Nestor P. Burgos Jr./INQUIRER VISAYAS

SEMIRARA ISLAND—Adelaida Porras broke down when she learned that several workers were buried under tons of excavated soil in an accident at the Panian mining pit on Semirara Island in Antique province on July 17.

She immediately thought of her husband Leovigildo, one of the five workers who remain missing, more than two years after the western wall of the Panian pit collapsed on Feb. 13, 2013. Bodies of five other workers were recovered.

“Everything came back. It’s like a rewind,” said Porras, 49.

She said she prayed that the nine workers who were buried in tons of excavated earth would be found, unlike what happened to her husband. Her prayers were answered.

While she has accepted that her husband is gone, she added that she does not want for the families of the nine workers to feel the pain of not being able to visit their loved ones in gravesites.

“I do not have a burial ground to visit when I want to be near him. I still cry for him until now and as long as he is not found, my grief will not go away,” she said.

Last week’s accident has again put the Semirara Mining and Power Corp. (SMPC) and its mining operations on the 5,500-hectare island, part of Caluya municipality, under renewed scrutiny especially that 19 workers had already died in two accidents that occurred in a span of 29 months.

Its safety measures and protocols are also put into question.

The SMPC, owned by the David M. Consunji Inc., has been operating one of the biggest coal mines in Asia on Semirara Island since 1999 after it took over the then government-owned Semirara Mining Corp. (SCC).

The COC gives exclusive right to SMPC to explore, develop and mine for coal on Semirara Island.

The DOE has ordered the suspension of mining operations in Semirara pending an investigation of the July 17 accident.

But there are various calls, including from legislators and the Provincial Disaster Risk Reduction and Management Council of Antique, to permanently close the Panian pit.

The nongovernment organization Institute for Occupational Health and Safety Development has demanded that the company be held criminally liable for failing to ensure the safety of their workers.

Several residents, who spoke to the Inquirer on condition of anonymity, questioned why the accidents with many deaths happened.

“The company has modern gadgets and equipment supposedly to prevent this. Why does this happen?” asked a resident who has a family member working in the company.

A former employee of the company noted that there were not that many deaths in a single accident when the mining firm was operated by the SCC.

“Many of the operations were done manually back then. There were equipment lost in accidents but no deaths,” the resident said.

But he assured that the company will be revising its mining procedure and protocol including the reduction of the maximum height of stockpiled excavated soil and the putting up of buffer zones of at least 30 meters wide to cushion possible landslides.

The DOE is determining the cause of the accident and liabilities of the mining firm, if any. But time is limited.

A prolonged suspension of mining operations or a permanent closure of the company could affect the country’s coal and power supply.

Forty percent of the country’s power supply comes from coal-fired power plants, according to the DOE.

Nearly half or 40 percent of the coal supply is produced locally which in turn is mostly produced by SMPC (96 percent).

The DOE hopes to conclude its investigation within a month when the coal inventory of the company is expected to be depleted.

Zenaida Monsada, DOE officer in charge, assured that the suspension of operations of the company will not resume until the safety of mine workers is ensured.

Officials of Caluya municipality and those whose livelihood is dependent on the mining company have raised concerns on the fate of the mining operations and SMPC.

The company has 2,575 employees with about 7,000 dependents. About half of the employees are from Western Visayas while the other half are from other provinces mostly in Mindanao.