A sign was posted on the window of the Manalo residence inside the complex of the Iglesia Ni Cristo (INC) with the words “Where are the missing ministers?” Outside, a wife of an expelled minister wailed and decried corruption of funds of the church.

This developed Thursday in the residence of the Manalo family, the ruling founders of the influential INC, amid a reported split in the family that could break the influential church ahead of its 101st founding anniversary on July 27.

A sign was posted on the window of the residence of Executive Minister Eduardo Manalo’s mother Tenny Manalo along Tandang Sora Avenue in Quezon City, within the INC complex and nearby the INC Central along Commonwealth Avenue.

A report said signs were posted on the windows earlier in the day, claiming they are hostages inside the building.

She is among a group of at least seven supporters who stake out in front of the Manalo residence urging the Manalo family to release the hostages.

Shirley’s husband Roel Rosal had claimed the church expelled him because he wanted to expose alleged corruption in the funds of the church. Roel Rosal was a minister until he was expelled last month.

He tagged the church auditor Jun Santos as being behind the alleged malversation of funds for lavish cars of some INC staff members. 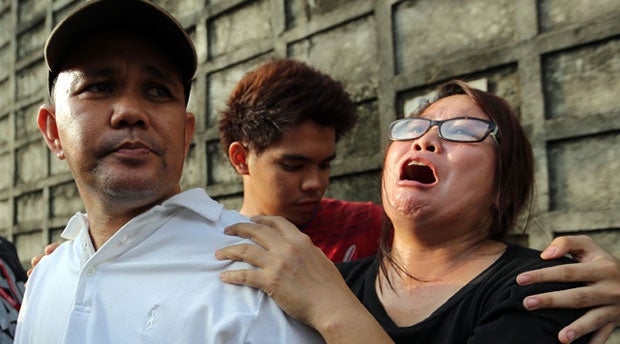 Emotional INC members show their support for the Manalo family who were allegedly illegaly arrested outside the Manalo residence at the back of the INC Grand Central in Tandang Sora, Quezon City. INQUIRER PHOTO/RAFFY LERMA

Asked about the alleged split in the Manalo family, Rosal said the family is breaking up because of “paghihiganti” (revenge) within the family. He did not elaborate.

He said he only knew of a believed split in the Manalo family because of the Youtube video posted online.

Outside, reporters were waiting outside the gate of the Manalo residence. Some faces can be seen peering from the windows. A hand was seen from inside the window taking pictures or videos of reporters outside.

After the sign was posted, a group of five INC members arrived and muttered a short prayer outside the gate.

They were then ushered inside amid chaos from the ogling cameraman. Cameramen said it was Executive Minister’s brother Angel Manalo who opened the gate.

INC Minister Edwil Zabala earlier told reporters they were expelled over the Youtube video they posted.

In the video, Manalo’s brother Angel Manalo appealed for help claiming there is threat to his life.

Manalo’s mother known as Tenny also asked for help for fear of their safety, saying she wished to talk with her son Executive Minister Eduardo Manalo. Tenny is the widow of INC’s late executive minister Eraño “Erdy” Manalo.

Tenny also said some ministers were abducted and are still missing.