A brief plea for help posted on YouTube on Wednesday night exposed cracks within the family behind the politically influential and formidable Iglesia ni Cristo (INC) and what appears to be a power struggle within the century-old indigenous Christian group.

On Thursday, in response to the post, INC expelled Cristina “Tenny” Villanueva Manalo and Felix Nathaniel “Angel” Villanueva Manalo, mother and younger brother of the group’s executive minister Eduardo V. Manalo, allegedly for trying to divide and seize power in the third-largest religious group in the Philippines.

Eduardo is the first child of the late INC executive minister Eraño Manalo with Cristina “Tenny” Villanueva. Their other children are Felix Nathaniel, Marco Eraño, Lolita, Erlinda and Liberty.

What appeared to be a family feud became public on Thursday with the expulsion of Tenny and Angel. The expulsions came as INC prepared for its 101st anniversary on July 27.

Marco Eraño Villanueva Manalo and Lolita “Lottie” Manalo Hemedez, brother and sister of Manalo, were also expelled, but it was not clear why.

It was also not immediately clear what happened to them, but Tenny and Angel, on the 1-minute-55-second video they posted on YouTube on Wednesday night, appealed for help, saying their lives were “in danger.”

Mother and son said there were threats to their lives and some ministers had been “taken.”

“We are appealing to you because our lives are in danger. We hope that you can help us,” said Angel, who opened the video message.

He introduced himself as the son of Ka Erdy (Eraño Manalo), who headed INC for 46 years until his death in August 2009. He is the younger brother of Eduardo, who took over the INC leadership after Eraño’s death.

“I hope that you also listen to the appeal of my mother, Sister Tenny Manalo,” Angel said in Filipino.

In her plea, Tenny gave scant but telling clues about who were behind the alleged threats to her and her son’s lives.

“I’m appealing to our brethren in the church to help us because there is a threat to our very lives. Please help my children Angel and Lottie and their companions,” Tenny said.

She called for help for at least 10 INC ministers “who were taken and until now have not yet been found.”

“Let us show mercy to them and to their families,” she said.

Her voice quivering, Tenny appealed to her eldest son: “And to my son Eduardo, I hope to talk to you.”

No report to authorities

She ended with another call to INC followers: “Dear brethren, may the Lord God help us all. Many thanks to all of you.”

Sought for comment on Thursday, Justice Secretary Leila de Lima said the Manalos’ plea for help had not reached her office.

“No such information or report,” De Lima said.

The Philippine National Police said it was looking into allegations by some INC members that some ministers of the group had been kidnapped.

Chief Supt. Wilben Mayor, spokesman for the PNP, said the PNP Anti-Kidnapping Group (AKG)and the Quezon City Police District had been ordered to check out the allegations and the appeal for help by Tenny and Angel Manalo.

“We are giving this due attention. The AKG and the QCPD are verifying the situation,” Mayor told reporters.

Senior Supt. Roberto Fajardo, AKG chief, said his unit had not yet received reports about the kidnapping of INC ministers or of members of the Manalo family.

He said his unit would take action once it received a complaint.

Several INC followers gathered at the gate of the Manalo home on Tandang Sora Avenue, Quezon City, trying to find out what had happened to the expelled family members.

Shirley and Roel Rosal, who were expelled from the group in June allegedly for trying to expose corruption involving INC ministers, said rumors of a schism in the Manalo family had been going around for a long time, but added that they believed the talk of division was being encouraged by a “third party” within the group’s administration.

Shirley Rosal said she went to the Manalo home because she had seen the video and she was heeding calls for help on social media.

She said she had seen a sign inside the house that read “hostage.”

“There was a drone [a while ago] and there were people monitoring us,” she said.

Supt. Ariel Capocao, chief of the Talipapa police station that has jurisdiction over the area, said no complaint had been received from the Manalo home.

“They have internal security. If there’s any trouble, they would have already contacted me,” Capocao said.

Sarah Manuel, 34, one of the INC followers gathered at the gate of the Manalo home, said she had learned that the water and electricity to the family home had been cut.

“We don’t want a fight. I saw the video last night where they were asking for help. Our initial reaction, as people who love the Iglesia, is we just want to help. We want to give them food and drink, and offer to bring them to their family elsewhere,” Manuel told reporters.

Bienvenido Santiago, INC general evangelist, told a news conference on Thursday that Tenny and Angel were expelled for posting the video, claiming their lives were in danger and some ministers had been kidnapped.

“Although it is painful for Brother Eduardo Manalo, the general leadership decided to expel those who are causing division in the Iglesia,” Santiago said.

“They allege that some ministers have been kidnapped. They want to make it appear that Iglesia is involved. That’s not true,” he said.

“Our reading of their message on YouTube last night is that they want to get the support of members who sympathize with them so they can get what they really want—to have a say in the running of the Iglesia,” he said.

“All should know that Iglesia is not a family corporation. It is a religion that follows the teachings of God found in the Bible. Brother Eduardo Manalo and the general leadership cannot allow meddling by anyone,” he said. 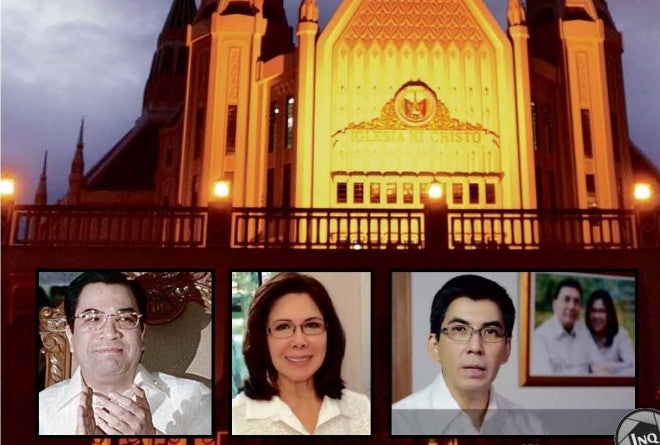 UNHOLY REVELATIONS The headquarters of the powerful Iglesia ni Cristo on Commonwealth Avenue in Diliman, Quezon City. Executive Minister Eduardo V. Manalo (left), de facto head of Iglesia ni Cristo (INC), has ousted his mother Tenny (Cristina) and brother Angel (Felix Nathaniel) and other siblings from the Christian sect after the two posted a video on YouTube claiming that their lives are in danger. Some 10 ministers of the group founded by Felix Manalo in 1914 have also reportedly been abducted by armed men for allegedly exposing massive corruption in the INC. EDWIN BACASMAS/VIDEO GRAB FROM YOUTUBE