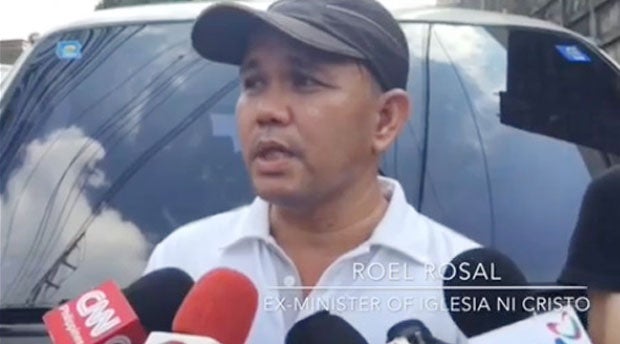 A disgruntled minister alleged that some officials of the Iglesia ni Cristo (INC) had extorted money from local politicians in exchange for the INC’s votes during the 2013 elections.

Roel Rosal, an expelled minister, said two politicians–a Bulacan mayor and a barangay (village) captain from Parañaque–had coursed through him a letter supposedly addressed to Executive Minister Eduardo Manalo about an alleged extortion by the INC’s “tagapangasiwa.”

Rosal said a “tagapangasiwa” handles the churches in a province and is equivalent to a bishop of the Roman Catholic Church.

The INC is usually wooed by politicians because of their practice of bloc voting.

He made the statement as he held vigil outside the Manalo matriarch’s residence along Tandang Sora Avenue on Thursday amid reports that the Executive Minister Eduardo Manalo had expelled his mother, Cristina “Tenny” Villanueva Manalo, and younger brother Felix Nathaniel “Angel” Villanueva Manalo from the church for causing disunity (“pagkabaha-bahagi”).

The expelled Manalos were allegedly held hostage inside the Manalo residence.

The family conflict erupted ahead of the 101st founding anniversary of the politically influential church on Monday, July 27.

Ka Tenny and Ka Angel were expelled over a YouTube video they posted claiming their lives were in danger. Also expelled were two relatives other siblings, Marco Eraño Villanueva Manalo and Lolita Manalo Hemedez.

Ka Tenny, in the video, also claimed a minister was abducted and is still missing. Tenny is the widow of INC’s late executive minister Eraño “Erdy” Manalo.

Rosal said he was expelled without due process last month for going against the leadership of the church. He said he only wanted to side with the truth.

He claimed some 10 ministers were abducted for their alleged knowledge of malversation of funds within the INC that allegedly went to some members’ lavish lifestyle.

He tagged the church auditor, Jun Santos, and his staff as allegedly being behind the “mishandling” of church funds.