Tears, blessings in the rain 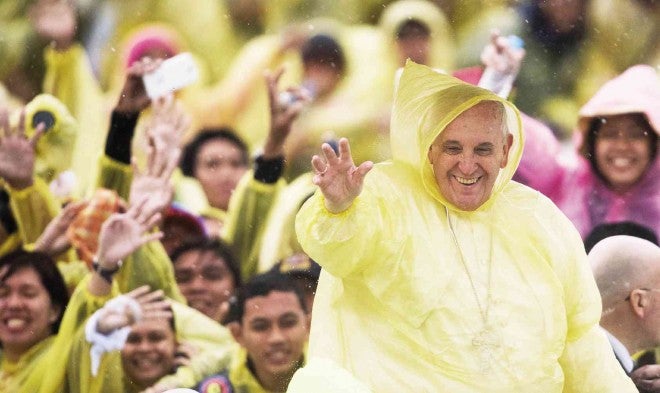 BEFORE TEARS OF JOY Armed with his trademark charisma, a raincoat-clad Pope Francis dispenses endless hope and joy while he waves to warmly welcoming well-wishers in Tacloban, where his long-awaited visit on Saturday, however, had to be cut short because of heavy rains from Tropical Storm “Amang.” AFP

TACLOBAN CITY—Pope Francis on Saturday celebrated an emotional Mass with a sea of weeping survivors of Supertyphoon “Yolanda” that claimed thousands of lives, saying their pain had silenced his heart.

Francis flew in from Manila to Tacloban, one of the cities devastated 14 months ago by the world’s most powerful cyclone known internationally as “Haiyan,” to be greeted by hundreds of thousands of people but also another storm.

His welcome echoed the rapturous reception that millions gave the Pontiff during the first two days of his trip to the Philippines, reinforcing its status as the Catholic Church’s bastion in Asia.

“Long live the Pope,” the crowd chanted as he walked off the plane to be immediately buffeted by strong winds and rain.

The visibly emotional Pope said he decided to visit Tacloban when he saw the catastrophe which hit the city the hardest.

He reached out to those whose loved ones or entire families died on Nov. 8, 2013, when Yolanda ravaged Tacloban and other areas mostly in the Visayas.

‘I walk with you all’

Worshippers many with tears in their eyes stand amid puddles in a mud-soaked field as the Pope comforted them.

“When I saw from Rome that catastrophe I felt that I had to be here,” said Francis in his homily during Mass at the airport.

“A little bit late, I have to say, but I’m here,” he said in a talk he gave in Spanish, disregarding a prepared speech in English because he said he wanted to talk from his heart.

Francis said while he is at a loss for words to comfort those who suffered deaths of loved ones and loss of everything during the storm, “He knows what to say from there,” pointing to the image of Jesus Christ nailed on the cross.

“I come to tell you that Jesus is Lord and He never lets us down,” he told an estimated crowd of 200,000 gathered beside Daniel Z. Romualdez International Airport, many of whom lost entire families during Yolanda.

Celebrating Mass at a makeshift altar on a site where more than 300 houses were washed away, Francis also called on the pilgrims to strengthen their faith in God.

“Jesus is Lord and the Lord from the cross, He’s there for you. Therefore He is capable of understanding us … in everything, the same as us. That is why we have a Lord who is capable of crying with us, capable of walking with us in the most difficult moments of life,” the Pope said, making a gesture with his arm pointed to an image of Jesus Christ nailed on the cross at the altar.

“Many of you have asked the Lord, ‘Why, Lord?’ And to each of you, to your heart, Christ responds from his heart upon the cross,” Francis added.

More than 6,000 died with at least 3,000 missing during Yolanda which also destroyed or damaged hundreds of thousands of houses and devastated livelihood of communities.

Many of the survivors have not returned to or rebuilt their homes and are staying in bunkhouses and other temporary shelters.

Damaged and destroyed houses can still be seen in Tacloban more than a year after the catastrophe.

“I have no more words to tell you. Let us look to Christ,” said Francis, continuing to gesture to Jesus Christ on the cross.

“He is the Lord. He understands us because he underwent all the trials that we, that you, have experienced,” he said in the homily that was delivered right on ground zero of Yolanda, Barangay 88 of San Jose District.

‘We are not alone’

The Pontiff said many have also come to help the survivors.

“We are not alone. We also have many brothers who, in this moment of catastrophe, came to help you. And we, too, because of this, we feel more brothers and sisters, because we helped each other,” he said.

The Pope led a moment of silent prayer. Many in the crowd were seen wiping tears under the hood of their raincoats.

The Mass, which was celebrated in Waray, Cebuano and Hiligaynon, the dominant languages in the Visayas, was held amid a backdrop made of sawali (woven split bamboo mats) with a 50-foot-high wooden cross.

But it was celebrated at the right side instead of the center of the altar due to the gusty winds and rain.

The Pope arrived in Tacloban around 8:47 a.m. on board a Philippine Airlines plane.

The pilgrims, many of whom had little sleep and were drenched in the rain, erupted in cheers and applause as the Pope emerged from the plane and rode on the Popemobile to the altar, about 100 meters from the airport.

“Your Holiness,” said Archbishop John Du of Palo, “You are on Yolanda ground zero here.”

“Your presence here inspires me to give praise to God, who, out of untold catastrophe has gifted us with this once-in-a-lifetime opportunity to come as one with you in joyful thanksgiving,” Du told the Pope.

Most of the people in the crowd at Tacloban wore thin yellow raincoats handed out by organizers, and the Pope also put one on before walking on a nearby stage to deliver Mass in heavy rain.

Du announced before the Mass that the rites will be made “simple” because of the bad weather with pilgrims receiving Holy Communion after the Mass.

The pilgrims started to leave after the Mass thinking that the Pope will proceed directly to Palo town where he was scheduled to have lunch with survivors of Yolanda and the Bohol earthquake.

But the crowed erupted again in frenzy when the Pope rode the popemobile and, instead of immediately proceeding to Palo, went around to greet pilgrims.

Organizers had been expecting 150,000 pilgrims to attend the Mass. Chief Supt. Asher Dolina, Eastern Visayas police director, said at least 200,000 people turned out, not including those who were outside the main Mass site which was divided into quadrants and separated by wooden barriers.

Despite the stormy weather and the long hours of waiting, the pilgrims went home in high spirits.

“I was inspired and he made me cry during the homily,” said Arlene Bohol of Barangay 96 in Tacloban. Her house was among those destroyed by Yolanda.

Mellisa Vargara from Mayorga town in Leyte said she did not mind the rain because she wanted to see and hear the Pope. “This is not ‘Yolanda’,” she told the Inquirer. Many of the pilgrims prayed for good health and the well being of their loved ones. “I only prayed for more blessing and no more disasters,” said Melissa.

“Pope Francis cannot give us houses and jobs, but he can send our prayers to God,” said Ernesto Hengzon, 62. “I’m praying for good health and for my children too. I am old and sickly. I’m praying that God will stop these big storms. We cannot take any more of it. We have barely recovered. Many people are still down there.”

“I cried. It was so heart-tugging,” she said.

She recalled the surging waters and furious winds that destroyed her family’s home during Yolanda’s onslaught. “But with God’s mercy, we all survived. Even when we lost everything, the important thing is we were all safe,” she said.

“For some reason I am not afraid of this rain. It feels like nothing to me,” said Marichu Ulam, 53.

She was afraid of Yolanda. But the storm Amang was weak compared to it, she said.

After all, she lost a daughter, Anjanette Azul, who was seven months pregnant, to the monster storm.

“The people are happy. His coming helps alleviate our pain. We want to move on, and we want to recover. The Pope has helped us heal,” Ulam said.

After the Mass, Francis rode the open-topped popemobile and greeted long stretches of the crowd. He made a few stops every time something caught his eye.

One of the lucky ones was Macky Macalla, 31, an elementary school teacher in Tanauan, a town south of Tacloban. He was clutching a small Sto Niño figurine bedecked in green.

The Pope stopped and took the religious icon, which Macalla bought in Cebu during its famed Sinulog festival. “He kissed and blessed it,” Macalla said, beaming.

Macalla said the Sto Nino was particularly important to him, as he believed it helped him survive Yolanda.

As he and his family members were running to escape the giant storm surges spawned by the typhoon, “this was the image I was carrying,” he recalled.

Efren Abrematea, 47, a former overseas Filipino worker, said he felt that the stormy weather was in some way a “blessing” from the heavens.

“Maybe it was God’s way of making the Pope feel as we felt,” he said, shivering in his raincoat. “Because of this, he can truly understand us and what we have gone through.”

And for many in the audience who watched the Pope’s vestments getting soaked and his gray hair dancing in the turbulent wind, and as they listened to his moving words, it seemed he might really have. With reports from Lito B. Zulueta and AFP

Pilgrim killed by falling scaffolding after papal Mass in Leyte