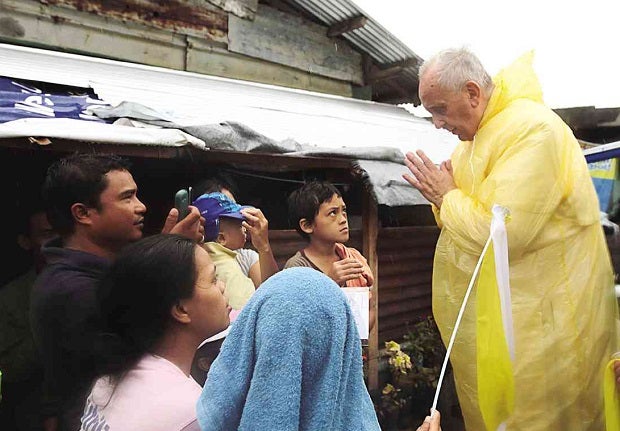 UNEXPECTED GRACE The Aria family of Palo, Leyte province, gets a surprise visit squeezed into a shortened schedule by the Pope, well-known for his heart for the poor. INQSnap this page for photos. MALACAÑANG PHOTO

PALO, Leyte—Retired nurse Alta Alfiche was singing “What a Beautiful Morning” despite being drenched by heavy rain while waiting outside the gate of Pope Francis Center for the Poor in Palo town, Leyte province, on Saturday.

Alfiche, 78, who flew from California to Tacloban City to see Pope Francis, had been lining up for more than two hours under pelting rain brought by Tropical Storm “Amang” (international name: Mekkhala).

A pilgrim registered in Zone A, Palo, Alfiche said she had been outside the gate since 5:30 a.m.

Security was tight and she endured the rain with hundreds of others, including infants and elderly people, who were also waiting at the gate.

Presidential Security Group personnel were painstakingly slow in checking the names on the IDs against their lists.

But no one left.

To ward off the cold, Alfiche began to sing: Oh what a beautiful mornin’

Oh what a beautiful day

I’ve got a beautiful feeling

Oh what a beautiful day.

People around her, who were also wet, were amused.

Alfiche told the Inquirer that she didn’t regret coming to Palo despite the rain because she wanted to see the Pope.

Liezel Sorilla was carrying her 14-month-old daughter, Maria Katrina Leizel, in the rain.

“She is used to the rain,” said   Sorilla, of Arado village in Palo, whose family survived Supertyphoon “Yolanda” (international name: Haiyan). That’s the reason why the child didn’t cry despite getting wet. Sorilla said she had to bring the child because she had to breastfeed her. With Sorilla were her husband and two other daughters aged 10 and 8.

At 7:30 a.m., the gates were thrown open and Alfiche, the Sorillas and the rest went in to wait for the arrival of the Pope.

Francis had planned to see for himself the devastation left by Yolanda, but the approach of Amang accelerated the papal Mass at the airport and the remainder of the program—a visit to Palo for a meeting with the local clergy, lunch with the typhoon survivors, and the blessing of the center for the poor named after the Pontiff—was compacted so he could leave four hours early and avoid worse weather.

Interior Secretary Mar Roxas said it was Vatican officials who decided to cut short the Pope’s visit to Tacloban and Palo.

Roxas said Amang was forecast to make landfall in Borongan City, Eastern Samar, just hours before the Pope’s original schedule to fly back to Manila.

The return flight was accelerated by four hours to prevent the Pope and his delegation from being stranded in Tacloban, Roxas said.

“The events in Leyte had to be shortened to allow the Pope to return to Manila much earlier not because of security threat, but as adjustment to the weather,” Roxas told reporters in Manila.

He said the government simply implemented the changes made by Vatican officials.

Pressed for time, the papal motorcade sped to Palo, but with Francis, wearing his yellow plastic raincoat, acknowledging the greetings and cheers from the multitude that had lined the road since early morning waiting to see him despite the beating rain.

Soon after arriving at the Palo Cathedral, Francis took the microphone and told a surprised crowd that he would have to leave at 1 p.m., four hours ahead of schedule.

“I apologize to all of you,” he said, speaking in Italian through a translator. “I am sad about this, truly saddened, because I had something prepared especially for you.”

Some of the priests, nuns and others in the cathedral groaned, though mostly in a good-humored way.

Instead of addressing the local clergy, Francis led them in praying the “Hail Mary” then proceeded outside to bless the center for the poor named after him.

Alfiche, the Sorillas and the rest of the Palo folk were disappointed when told by Fr. Manuel Baybay, the event organizer, that the Pope would not be able to meet them because of his shortened schedule.

Baybay told them, however, that the Pontiff blessed the center and to lift their spirits, he cheered, “Viva il Papa!”

Built by Cor Unum, the Vatican aid agency, the Pope Francis Center for the Poor aims to help orphans and elderly people.

The Vatican’s spokesperson, Fr. Federico Lombardi, said the Pope made an unprogrammed visit to the house of a local family. He talked with the family and blessed them before leaving, Lombardi said.

The unscheduled visit followed Friday’s surprise visit of Francis to a shelter for homeless children in Manila after celebrating Mass at the Manila Cathedral.

In Palo, after a quick exchange of gifts with the local church leaders, in which Francis received a wood image of Our Lady of the Immaculate Conception made from the debris from the typhoon-damaged cathedral, the Pope’s motorcade sped to the airport in Tacloban for the flight back to Manila.

The papal plane made the flight back to Manila safely.

Although the Pope cut short his visit to Leyte, many were pleased.

Sister Gemma Abunda Silvero of the Missionary Sisters of the Sacred Heart said she was moved by the Pontiff’s visit.

A former Augustinian Recollect sister, Silvero, 74, said her homegrown congregation was involved in the ministry for poor people.

She said that although her order got canonical approval from the late Manila Archbishop Jaime Cardinal Sin, its apostolate was focused on Eastern Visayas, where some of the Philippines’ poorest provinces are located.

Silvero said her order lost all of its schools during Yolanda, and was trying to rebuild them.

Silvero said that although the Pope’s visit was brief, it was a moral booster.

“We continue to have faith in God,” she said.

Saturday’s storm, which was expected to make landfall on nearby island province of Samar in the late afternoon with winds of 100 kph to 130 kph, was an eerie reminder of Yolanda, but it did not stop Francis from traveling to Tacloban. But it forced him to leave Manila early and abbreviate his visit with the typhoon survivors to four hours, from the planned seven hours.

The Philippine Airlines Airbus A320 carrying the Pontiff took off from Villamor Air Base in Pasay City at 7:35 a.m., ahead of the originally planned departure at 8:15 a.m.

The plane arrived at Tacloban airport an hour later, and Francis, donning a yellow, translucent plastic raincoat, plunged in his popemobile into the wet but festive crowd that had built up overnight to welcome him.

“Viva il Papa (Long live the Pope),” the people chanted as Francis rode to the open field near the airport where he was to say Mass for the victims and survivors of Yolanda.

A police official estimated the crowd at the airport at 150,000 and said tens of thousands more were lined up outside the airport and along the route of the Pope’s motorcade to Palo.

Tacloban had a population of about 200,000 before Yolanda.

Francis’ trip to ground zero was to have given him the opportunity to speak about climate change ahead the release of his encyclical on the environment.

The Pope said the encyclical was almost finished and that he hoped it would be published in June, ahead of the UN climate talks in Paris in November.

Francis waded into the climate change debate on Thursday, telling reporters on the plane to Manila that he believed that man was primarily responsible for it and that he hoped this year’s UN climate meeting would take a courageous stand to protect the environment.

“I don’t know if it is all [man’s fault] but the majority is. For the most part, it is man who continuously slaps down nature,” he said. With reports from Niña P. Calleja and Marlon Ramos in Manila; Lito B. Zulueta in Tacloban; Nestor P. Burgos Jr., Inquirer Visayas; AP, AFP

Pope Francis spoke less but in volumes for Yolanda survivors