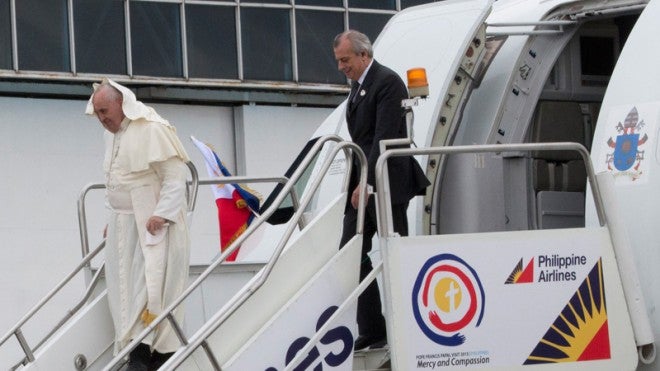 Pope Francis, followed by Alberto Gasbarri, Pope’s trip organizer, arrives in Manila, Philippines, Saturday, Jan. 17, 2015. Francis traveled to the far eastern Philippines to comfort survivors of devastating Typhoon Haiyan in 2013 on Saturday, but cut his own trip short because of another approaching storm. (AP Photo/Alessandra Tarantino)

MANILA, Philippines—Pope Francis has arrived back in Manila after celebrating Mass in Leyte, the centerpiece of his five-day visit to the Philippines.

The Pope took the time to greet the people waiting at the airbase before boarding the vehicle that would take him to the Apostolic Nunciature.

His Holiness greeted the elderly, kissed the babies and posed for a selfie with several people. A man presented a skull cap to the Pope and the Pontiff traded the one he was wearing to him.

The Vatican decided to cut short the Pope’s Leyte trip after the pilots warned that heavy to intense rains may hamper their journey back to Manila as Tropical Storm “Amang” brought forth rains over the Samar provinces.

“I apologize to you all. I am truly saddened because I have something prepared especially for you,” Pope Francis told the crowd at the Palo Cathedral before leaving.

Upon landing at Villamor Airbase in Pasay City, Pope Francis will be brought to the Apostolic Nunciature in Manila.

Pilgrim killed by falling scaffolding during papal Mass in Leyte