Pilgrim killed by falling scaffolding after papal Mass in Leyte 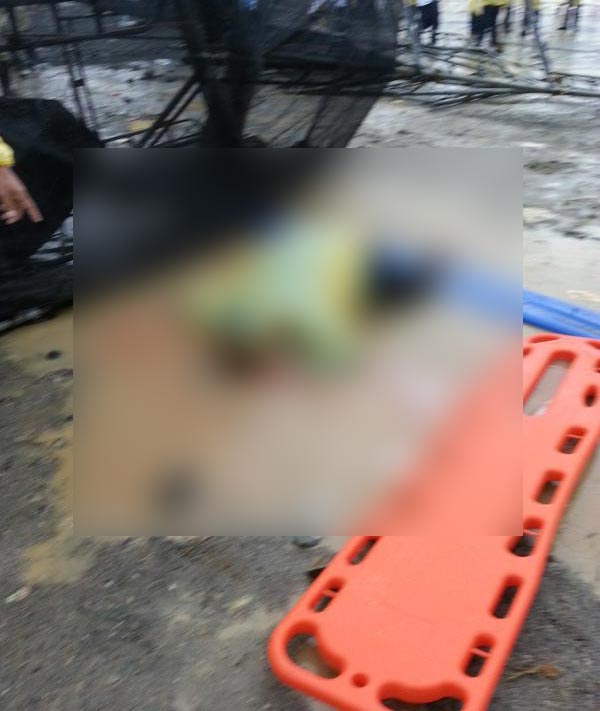 The victim, identified as a certain Kristel Padasas, lies face down after being hit by a falling scaffolding during the Mass celebrated by Pope Francis at the Leyte Airport on Saturday. PHOTO BY CHONA YU/RADYO INQUIRER

TACLOBAN CITY–A pilgrim was killed when she got hit by a falling scaffolding after the celebration of Pope Francis’ Mass here on Saturday.

Radyo Inquirer’s Chona Yu reported that the victim, identified as a certain Kristel Padasas, a volunteer of the Catholic Relief Service, was killed when she got hit by the falling scaffolding of a speaker near the altar.

Traiso said Padasas, 21, got hit by a falling metal after the celebration. Earlier reports said the accident happened during the Mass.

Reverend Father Amadeo Alvero, Palo Archbishop spokesperson, expressed deepest apologies that this had to happen during the papal visit.

He clarified that the scaffolding fell due to the strong winds brought by Tropical Storm “Amang” and not because of the crowd.

Alvero said the accident happened after the Supreme Pontiff sped off from the airport for his short motorcade to Palo.

He clarified that it didn’t happen when Pope was saying Mass or when the Pontiff surprised pilgrims with a motorcade around the Mass venue in his popemobile.

“Nahulog dahil sa hangin… We are very sorry this had to happen,” Alvero said.

Pope Francis celebrated Mass in the Daniel Z. Romualdez Airport here even as Amang brought winds and rains to Leyte, which was placed under Signal No. 2.