Pope Francis spoke less but in volumes for Yolanda survivors 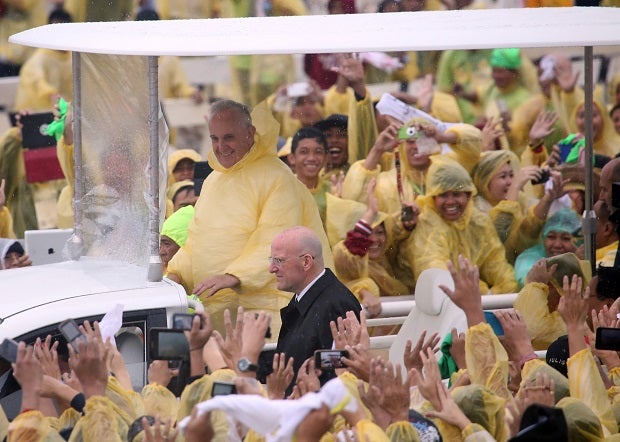 Pope Francis waves to devotees who attended his mass in Tacloban airport despite the rain brought by typhoon amang. CDN PHOTO/LITO TECSON

TACLOBAN CITY, Philippines—The Vicar of Christ was lost for words to assuage the plight of storm survivors here, but in so doing, the devout pilgrims found comfort beyond words.

Pope Francis delivered a riveting and heartfelt Homily during his mass for storm survivors of Typhoon “Yolanda” on Saturday, but he apologized to the pilgrims for failing to find the right words to express his sympathy.

But the pilgrims, mostly storm survivors traumatized by the world’s strongest typhoon to hit land, barely lost their faith on the humble Pope, who, in speaking less, spoke volumes.

“It made us cry because he gave his message from the heart,” said pilgrim Roberto Ojales in Filipino.

Ojales said though the Pontiff said he could not give the right words, His Holiness made them feel like he understood their situation.

“Even though he could not say anything more, I can tell that he knows what he went through,” Ojales added.

Maria Flordelis, 54, said she was impressed by how the Pontiff wanted to be with the people despite the tropical storm.

The Pope braved the storm “Amang” only kept dry by his partially roofed mobile and a flimsy, yellow raincoat, the same garb provided to pilgrims who attended his Mass.

“I can see his being a comforting father. He was one with us. He joined us in our trials. He sees the reality of being in Tacloban,” Flordelis said.

“We are glad for his presence. He is the presence of Jesus,” she added.

Doing away from his prepared speech, the Pope delivered an impromptu Homily which turned out to be more heartfelt than when it was scripted.

Speaking with his heart alone, the Pontiff consoled the storm victims and asked them to “hold on to Mama Mary” and know that Jesus Christ understands their pain.

He said Jesus knows the Yolanda survivors’ plight since the Savior when He was nailed to the cross suffered all the pain we have endured.

“As a child holds the hand of her mother as when he is in fear. It is the only word to say at this difficult time – ‘Mom,’ ‘mother,'” Pope Francis said during his homily on Saturday morning.

“In moments when we have so much pain, when we do not understand anymore, all we could do is grab hold of her hand firmly,” he added.

The Pope had to cut short his stay in Leyte to the threat of a storm landfall. Pope Francis said he had long wanted to visit typhoon-struck Yolanda, which caused almost 6,300 deaths.

“When I saw the tragedy, I realized I have to be here… A little bit late, but I’m here,” the Supreme Pontiff said.