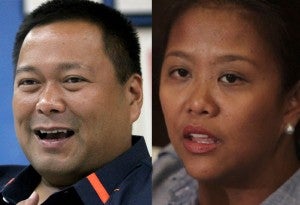 MANILA, Philippines — Senators on Friday rallied behind their 90-year-old colleague, Juan Ponce Enrile, who was ordered arrested for his alleged involvement in the “pork barrel” scam.

“I am just appealing to allow Sen. Enrile to be detained at the PNP hospital or any facility that will be more comfortable than the PNP Custodial Center for humanitarian consideration, since he is already 90 years old and with a lot medications needed,” Ejercito said in a text message to reporters.

Binay, meanwhile, hopes that the court will be “compassionate” to Enrile, by granting him either a hospital or house arrest, or bail.

“Due courtesy lang sana ang i-extend ng mga arresting officers [We hope that due courtesy will be extended to him],” she said in a separate text message.

“I pray and I hope that the courts would be compassionate to grant him house/hospital arrest or bail if there’s any request. But I understand he is prepared to stay in jail even with his age and health,” Binay added.

While Enrile’s arrest was expected, administration Senator Juan Edgardo Angara noted that many were also hoping that “there are special precautions regarding his health taking into account his advanced age.”

“Nothing special because he is a senator but the care to be given to a 90 year old human being,” Angara said in another text message.

“From the onset of the PDAF controversy, he’s said he is not afraid and that he is prepared to defend himself. If anyone can be truly ready for this, it’s perhaps Sen. Enrile,” Poe said.

Senate Majority Leader Alan Peter Cayetano, who had bitter exchanges with Enrile, said that he should be treated “humanely.”