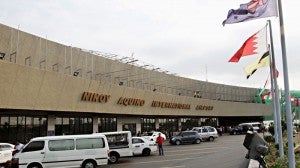 MANILA, Philippines—An aircraft mechanic sustained head injuries and burns when he was struck by lightning while inspecting an aircraft at the Ninoy Aquino International Airport’s Terminal 3 in Pasay City at the height of a thunderstom Thursday night.

Sheldon Balang, 25, an aircraft mechanic employed by Aviation Partnership Philippines Corp. at its Airlines Aviation Center, suffered lacerations on the head and second degree burns on the right ear and foot and and had no heartbeat on arrival at the San Juan de Dios Hospital around 8 P.m. but doctors managed to revive him, said a medical report submitted by Dr. Adam Chua.

According to a statement made on Friday by Charles Suerte, the operations manager of the Aviation Partnership Philippines, Balang was inspecting a Cebu Pacific aircraft when lightning struck near the airplane, hitting the mechanic. Suerte said Balang lost consciousness and fell head first on the pavement.

On Friday morning, Balang was transferred to the Makati Medical Center where he is now recovering from his injuries, the Pasay police said.