Marcos: ICC welcome only if ‘system collapses’ or ‘we have war’ | Inquirer News

Marcos: ICC welcome only if ‘system collapses’ or ‘we have war’ 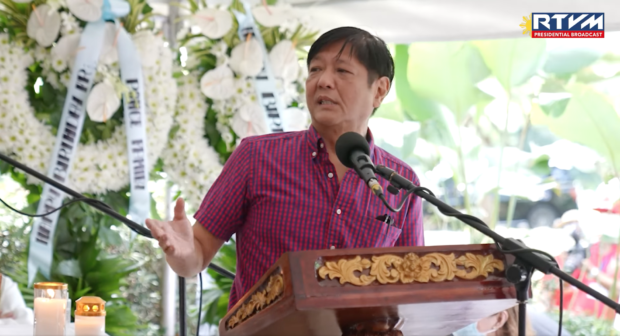 MANILA, Philippines — President Ferdinand Marcos Jr has maintained that investigators of the International Criminal Court (ICC) need not come to the Philippines to look into the alleged crimes against humanity committed by his predecessor Rodrigo Duterte and the latter’s subordinates in the war on drugs.

The only way for ICC investigators to be welcome in the country would be “if the whole system collapses” or “if we have a war here,” Marcos said.

The president also stood firm on his position that the country would not rejoin the ICC, which it left in March 2019 by withdrawing from the Rome Statute, the founding document of the tribunal based in The Hague, Netherlands.

“I don’t see any reason why we should [rejoin the ICC],” Marcos said in an interview aired on Tuesday on the newly launched ALLTV network of billionaire Manuel Villar.

The ICC, he said, “very simply is supposed to take action when a country no longer has a functioning judiciary… and no longer has the organs of state, the police, etc.”

The president also dismissed criticism from human rights groups about his decision not to rejoin the ICC.

“I do not see why it’s a violation of human rights. It is a question of jurisdiction and sovereignty,” he said.

In September 2021, the ICC prosecutor announced that it was opening a formal inquiry into the Duterte administration’s drug war after several petitioners accused him and his subordinates, including his former police chief, Ronald dela Rosa, now a senator, of being responsible for the death of thousands of drug suspects.

But it halted the proceedings in November 2021 at the Philippine government’s request. It is now in the process of determining whether to resume the inquiry.

During the interview, Marcos said the ICC should not intervene in a domestic matter.

In August, Marcos said the Philippines would not rejoin the ICC because the government was already investigating alleged human rights abuses in Duterte’s drug war.

Although the Philippines withdrew its membership from the ICC in March 2018, taking effect one year later, ICC had maintained jurisdiction over the country during that interim.

Under Article 127 of the Rome Statute, a state “shall not be discharged, by reason of its withdrawal, from the obligations arising from this Statute while it was a Party to the Statute, including any financial obligations which may have accrued.”

The investigation was suspended in November last year on the Philippine government’s request, which noted that the administration had employed “domestic remedies” to look into allegations of extrajudicial killings and other human rights violations under the previous government.

The PTC then asked the Philippine government and the families of the drug war victims to submit their comments until Sept. 8.

On the day of the deadline, the government, through a statement from the Office of the Solicitor General, asked the ICC’s PTC to deny its prosecutor’s request to reopen an investigation into the war on drugs and reiterated that the ICC had no jurisdiction over the situation in the country.