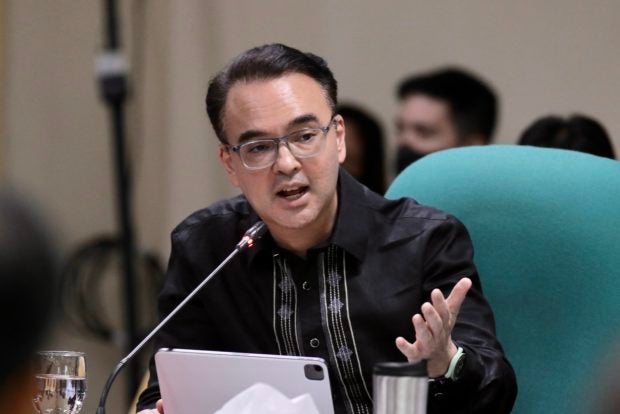 MANILA, Philippines — The so-called “parking” of billions of pesos worth of government projects has been resuscitated in the proposed P5.3-trillion national budget for 2023, Sen. Alan Peter Cayetano claimed on Wednesday as he called on President Ferdinand Marcos Jr.’s economic managers to look out for a “syndicate” behind the alleged scheme.

The budget manipulation was first exposed by then Sen. Panfilo Lacson after allies of then-Speaker Gloria Macapagal Arroyo traded accusations of fiddling with the 2019 spending program.

During the briefing of the Development Budget Coordination Committee (DBCC), Cayetano disclosed that some unscrupulous officials had funneled multibillion-peso infrastructure projects to select congressional districts.

He said the questionable changes were made in next year’s budget of the Department of Public Works and Highways (DPWH) under the National Expenditure Program that the DBCC submitted to Congress.

Under what he called the “expanded fund parking scheme,” the allotments of at least 10 congressional districts were reduced by as much as 93 percent from their original allocation.

In general, parking of funds refers to a scheme of placing the allotments meant for a certain legislative district or department elsewhere before these are transferred to a favored district or projects chosen by legislators.

“There’s a group going around telling these (congressional) districts that they could restore the funds, but their favored contractors should be awarded the projects,” Cayetano said at the DBCC hearing.

According to him, what is more alarming “is the possibility that the fund manipulation is happening at the source, meaning the DPWH budget, even before it is submitted to Congress.”

“If the reports are true, it has become a corruption pandemic,” he added.

Cayetano said the supposed members of the syndicate had been talking to district representatives and the DPWH’s district and regional officers.

Some districts, he said, saw their funding dwindle from P5 million to just P500,000 without any explanation from the DPWH.

“There are so many red flags. But I have to admit that these red flags were just based on oral testimonies given to me,” Cayetano said at a press briefing.

“But there are facts on the ground,” he said. “The DPWH cannot do this alone because you cannot do this without talking to a congressman or a senator.”

According to Cayetano, the allocations were commonly intended for flood control projects in far-flung places and other areas that were not usually covered by mainstream media.

“I’m really disgusted that this is happening,” he said.