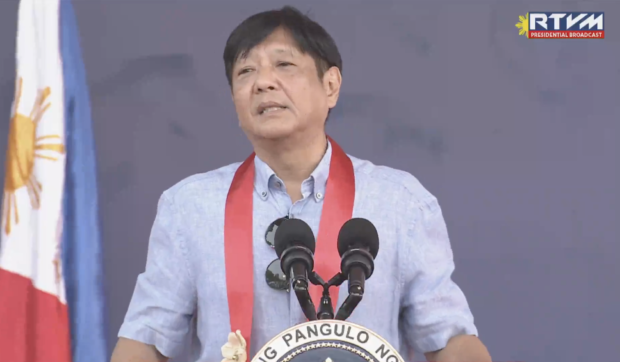 President Bongbong Marcos in his speech during the tree-planting activity on the occasion of his 65th birthday in Rizal. Screengrab from RTVM video / Facebook

MANILA, Philippines — As various groups prepare to mark the 50th anniversary of the declaration of martial law next week, President Ferdinand Marcos Jr. denied engaging in historical revisionism regarding his father’s strongman rule.

The president also defended his late father’s imposition of martial law when in power, saying it was necessary because he was simultaneously fighting communist and separatist rebellions.

Marcos acknowledged “the abuses that occurred” but said they happened “like in any war.”

“Martial law was declared because of the two wars we were fighting on two fronts,” he said in a recorded interview aired on Tuesday on the newly launched ALLTV channel, referring to the communist insurgency in the countryside and the Muslim separatist war in Mindanao.

The communists, he said, were “fomenting revolution” and “the government had to defend itself.”

“Most people do not realize how… close [the rebels] came to Manila and how close they came to large urban centers and slowly gained control,” he added.

As for the conflict in the South, Marcos said the separatists were being supported by foreign countries such as Libya, which was the reason why her mother, then first lady Imelda Marcos, went to the North African country to seek Tripoli’s help in brokering peace in Muslim Mindanao.

“Those were the dangers and the perils that the country were facing… And that’s why it was necessary to—in my father’s view at the time—to declare martial law because there is really a war,” he said.

The president’s remarks are expected to bolster the concerns of critics that he has no intention of distancing himself from the tenure of his father and that this could pose risks to democracy in the Philippines.

During the campaign, critics said his presidential bid was an attempt to rewrite history by whitewashing corruption and authoritarianism associated with his father’s 20-year rule.

The elder Marcos and his family fled the 1986 uprising against his rule after he had overseen what many historians have described as one of the worst examples of a kleptocracy in Asia.

Marcos Sr. died in exile in Hawaii in 1989, but his family later returned to launch a comeback that culminated in his son’s election victory in May.

Bonifacio Ilagan, who was jailed and tortured during martial law, said the late leader stayed in power for 14 years after imposing martial law, dismissing any suggestion it was due to an emergency situation.

Under martial law, Marcos dissolved Congress, transferring all powers to the president, enforced a curfew, banner group assemblies, and authorized the military to arrest individuals on charges of conspiring to take over the government.

In the 1970s, Marcos took out huge foreign loans that his administration could not repay. The country’s foreign debt had ballooned to $28.26 billion by the end of his rule, from $360 million in 1961.

The Marcos family is also believed to have amassed $10 billion in ill-gotten wealth while in power. Asked if he felt hurt when people refer to him as the “son of the late dictator,” Marcos said he had no reason to feel that way.

“No, because I know they’re wrong. How many times have I been here in this room [in Malacañang] where he was in consultation with different groups? A dictator does not consult. A dictator will just say, ‘Do this whether you like it or not.’

“How many times have I watched caucuses here, have I watched meetings in this hall? He really spoke to different industries from time to time. [He would] really ask, ‘How can we do this? What do you really want?’” said the President, who was 14 years old when martial law was declared in 1971.

“In fact, I would venture to say in most of the following administrations to my dad. There was less consultation with groups, ordinary people, farmer groups, for example, than in my father’s time. Because I know that everything he did, he did with consultation with whoever. No matter what the system of government was. That’s why for me, you can say what you want, that’s your opinion. You’re wrong,” he said.

He said he was no longer hurt by the accusations against his father, adding: “No, it would hurt me if they were right, but they’re wrong. So…”

As far as he was concerned, the history of the martial law years may no longer be revised because the facts have already been ascertained.

But because “victors write history,” the Marcoses’ side of the story was not taught in schools or presented in the media, he said.

“Those reasons [for declaring martial law] were expounded at great length during my father’s time. But of course, the situation got polarized. It’s the opponents who are now writing history, and that’s what happened, that’s why the people learned about it (martial law) that way,” he added.

“We recognize the problems that happened, the abuses that occurred, like in any war. All of these things are some things that are already part of history,” he said.

Whenever he is confronted by accusations of historical revisionism, Mr. Marcos said, he would respond by showing the “many lies” told by his accusers.

Regarding his proposal to change how martial law is depicted in history textbooks, he said it would only restore “facts” that critics had supposedly distorted.

“Only if they’re wrong [should there be changes]. They’re factual anyway, you can check facts. Let’s talk about facts, not political opinion. What are the things that actually did happen? That we can show, we can prove. Look, we have video, we have photographs, we have records. This actually happened, as opposed to those who say, ‘You know we heard this was how it happened, we have an intelligence [report] saying so.’ These became basically rumors that can’t be proven. All that we say we can prove. That is why, how can it be a revision of history?” he said.

“You distort history, maybe, when you say that these are actual facts but the interpretation is the spin,” he said.

—WITH REPORTS FROM REUTERS AND INQUIRER RESEARCH

UP offers new courses on PH film and martial law