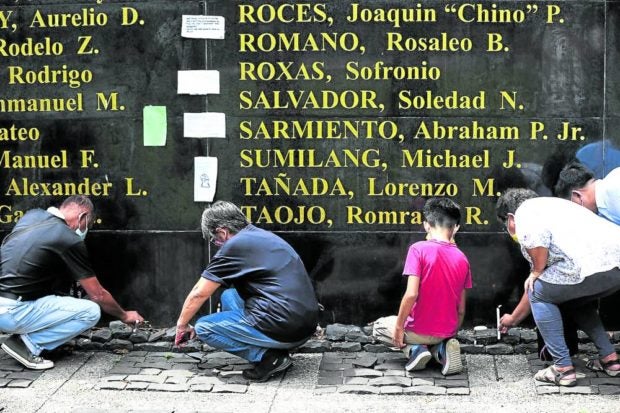 VICTIMS REMEMBERED Relatives and friends of victims of human rights abuse during martial law gather at Bantayog ng mga Bayani in Quezon City on May 21 to honor the heroism of those who fought against the Marcos dictatorship. —NIÑO JESUS ORBETA

MANILA, Philippines — In the past several years when disinformation and historical distortion became rampant, particularly on the subject of the martial law regime of Ferdinand Marcos Sr., “the Filipino people did not stay silent — whether in the streets or [on] social media,” said history professor Francisco Guiang of the University of the Philippines Diliman.

So in yet another pushback against the “blatant lies” about that era, academics and activists on Aug. 3 launched a 50-day countdown to the 50th anniversary of the declaration of martial law.

Activists have traditionally commemorated the anniversary of martial law on Sept. 21. But its actual declaration was on Saturday night, Sept. 23, 1972, according to the Official Gazette website of Malacañang.

The subsequently issued Proclamation No. 1081 formally declaring martial law was antedated to Marcos’ preferred date of Sept. 21 that year.

This was in line with Marcos’ “obsession with numerology (particularly the number seven) [which] necessitated that Proclamation No. 1081 be officially signed on a date that was divisible by seven,” said the Official Gazette. “The propaganda effort was so successful that up to the present, many Filipinos — particularly those who did not live through the events of September 23, 1972—labor under the misapprehension that martial law was proclaimed on September 21, 1972. It was not.”

The activities, however, being planned by activists and scholars for this year’s 50th commemoration are tentatively scheduled on Sept. 23 — to be kicked off by a webinar as well as a social media campaign that will provide a “daily dose of books” on martial law and a “people’s timeline” that will offer the “perspective of ordinary Filipinos,” they said.

A group of historians, teachers, researchers, students, and history enthusiasts called Alyansa ng Mga Tagapagtanggol ng Kasaysayan (Tanggol Kasaysayan) released an excerpt from historian and architect Gerard Lico’s “Edifice Complex” — the first in the “daily dose of books” under what they called the “SingkwentAKDA” initiative which stands for the words “singkwenta” (50) and “akda” (literary work or composition).

Ateneo de Manila University history professor Michael Pante said: “When you read the ‘Edifice Complex’ of Gerard Lico, we don’t look at buildings and mega projects that Marcos supporters always boast as manifestations of his great leadership but we connect them to the blood, sweat and literal lives of the construction workers involved in one of [former first lady] Imelda Marcos’ pet project.”

Tanggol Kasaysayan is also preparing an “alternative historical timeline” that will serve as an online database on events of economic, cultural, religious, and environmental significance that “influenced Philippine society” during the dictatorship.

Pante said many timelines on martial law have been created online and in books, but most of these focus on political affairs—Marcos’ declaration of martial law, the establishment of the 1973 Constitution to replace the 1935 Constitution of the democratic Third Republic, and the creation of the Batasang Pambansa (National Assembly) which the political opposition criticized as being Marcos’ rubber-stamp legislature.

“[But] how about other events like women’s issues? How do we integrate the protest of the group Makibaka in front of the Araneta Coliseum to advance their progressive point of view on women during a Binibining Pilipinas pageant?” Pante said, adding that historical matters like this would be covered in the “People’s Timeline on Martial Law.”

He noted that it was called “people’s timeline” because it is a “chronological, rich and online” database of events that are “close to the personal lives of the people.”

The timeline also intends to repurpose, so to speak, the connotation of “tagging,” as it provides different data tags depending on the historical context or event.

“Oftentimes, ‘red-tagging’ is used to weaken progressive organizations and activists, but in this people’s timeline, every event can be tagged based on the issue [concerned]—water, energy, democratic rights, women and more,” Pante said.

When the project has become considerable enough to be shown to the public, he said this would help researchers filter the database based on their desired topic of research.

Considering the scope of this online project, volunteers are welcome to help in building the database, Pante said.