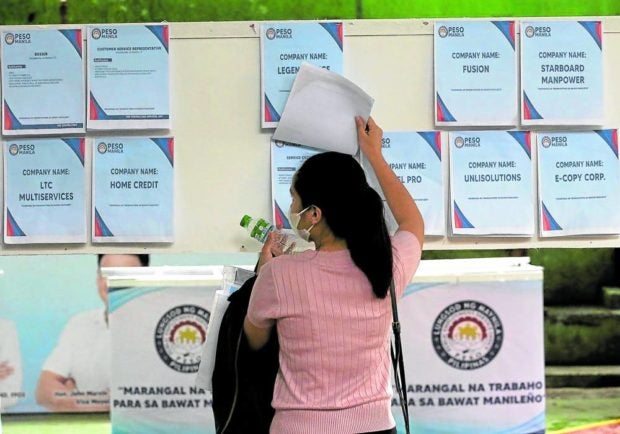 ANY VACANCY? A woman checks job opportunities posted by different companies during a job fair held by the Manila city government’s Public Employment Service Office at a covered court in Tondo district on Monday. —RICHARD A. REYES

MANILA, Philippines — The need for a bigger family income to meet the unabated increase in prices of food and other essential items is forcing even retired senior citizens to look for jobs.

Mariana (not her real name) is a 78-year-old retired professor at a state university. After leaving the school formally in 2008, she still worked part-time teaching English and language courses, until the pandemic struck.

Mariana said she was still able to teach an online class for a semester, but decided to quit altogether. “Online class was just too stressful, especially when the WiFi signal is too weak. My students and I could not understand each other,” she told the Inquirer.

Until recently, Mariana, a widow who supports the brood of her youngest child, still managed to live off her P11,000 monthly pension from the Government Service Insurance System and an additional P5,000 a month from the Social Security System.

But the continued increase in consumer prices forced her to accept writing and editing jobs and she now assists and advises public school teachers who are completing their postgraduate thesis.

“I earn between P35,000 [and] P40,000 per client, depending on the difficulty of the job. My earnings depend on how many ask for my services. And there are those who can only pay by installment,” Mariana said.

The retiree knows what she earns will not be consistent. “But beggars cannot be choosers, especially in my situation,” she said.

While the bulk of new joiners in the labor force were in the age bracket 25 to 34, which include new graduates, National Statistician Dennis Mapa told a press briefing that there was an increasing number of labor force entrants from higher age groups, or those above 35 years old.

For instance, Mapa said the labor force participation rate for those age 65 and above—or the number of senior citizens either working or actively looking for a job—increased to 38.2 percent from 34.9 percent last May.

Mapa said that in the PSA’s survey, 65 percent of the respondents said they looked for regular jobs because they wanted more earnings to help them cope with rising prices.

Amid these harder times, regardless of age, “you will be looking for a job to augment your income,” Mapa noted.

Inflation, a measure of the average increase in prices of basic goods and services, averaged 4.4 percent during the first half of 2022, or above the 2 to 4 percent that the government considers manageable and conducive to economic growth. Inflation rose for a fifth straight month to 6.4 percent in July, the highest since the rice crisis of 2018.

Mapa noted that despite the bigger number of Filipinos looking for work, the available jobs from sectors that were reopened following the easing of quarantine restrictions were taking a hit from high prices.

He cited the wholesale and retail trade as well as repair of motor vehicles and motorcycles industry, which shed 1.22 million jobs month-on-month and 788,000 year-on-year in June.

Mapa said most of these declines in employment were in nonessential retail sectors, reflecting the tighter budgets of households reeling from high inflation, but noted that more expensive flour and, in turn, bread also led to fewer jobs in bakeries last June.

The PSA labor force survey for June showed that the unemployment rate remained at 6 percent, similar to that posted in May, but the number of jobless Filipinos rose to 2.99 million from 2.93 million a month ago, bigger by 62,000. This was due to the increase in the labor force—or the number of Filipinos age 15 and above, employed or unemployed—to 49.58 million in June from May’s 49.01 million.

Mapa said the June jobless rate was better than the 10.4 percent (4.5 million unemployed) in 2020 at the height of the most stringent COVID-19 lockdowns that shed millions of jobs and shuttered thousands of businesses, as well as the 7.8 percent (3.7 million jobless) last year amid the prolonged health crisis.

But with the economy reopening in full swing, Mapa said they expected unemployment to further go down.

For the state planning agency National Economic and Development Authority (Neda), “the country needs a safe and full reopening of the economy to return to a high-growth path and reinvigorate job creation.”

“The reopening of the economy, including the resumption of face-to-face schooling, will boost domestic activities and insulate the economy against external headwinds,” Socioeconomic Planning Secretary and Neda chief Arsenio Balisacan said.

A bit of good news in the PSA survey was that the underemployment rate “significantly” fell to a low of 12.6 percent in June—only the 12.3 percent posted in May 2021 was the better number in the PSA’s records—as economic reopening allowed more workers to work for at least 40 hours a week. The underemployed are those with jobs but wanted higher pay or more working hours.

In the PSA’s survey, 33 percent said they went to work for 40 hours or more a week as required by their employers, unlike in the past when workers’ work hours were slashed, which Mapa said meant quality jobs were returning amid the economic recovery.

Mapa said more better-paying jobs were added to the retail, construction, fishing and forestry, manufacturing, as well as transportation sectors in June.

“In terms of hours of work, full-time employment, or those who worked for more than 40 hours a week, increased substantially by 11 percent, or an additional three million individuals, while part-time workers declined by 8 percent or 1.4 million fewer individuals compared to June 2021. “Correspondingly, the mean hours of work improved from 39 in June 2021 to 40.3 in June 2022,” Neda said.

Read Next
Countdown to 50th anniversary of martial law launched
EDITORS' PICK
Percy Lapid’s kin: ‘We demand that his cowardly assassins be brought to justice’
Nothing’s certain so here’s how everyday Filipinos can make the most out of their Plan B
Do all the things you do, faster
PNP vows to bring justice for slain Percy Lapid; says probe underway
House energy committee chair Arroyo bats for cheap electricity
‘Seniority’ requirement despite vacant posts in DOH bothers senators
MOST READ
Student stabs teacher dead in Samar town
Trixie Angeles quits as press secretary due to health reasons
Not rehired?: Trixie Angeles not on list of reappointed Cabinet execs
Final net satisfaction rating slightly decreases for Robredo, Sotto — SWS
Don't miss out on the latest news and information.