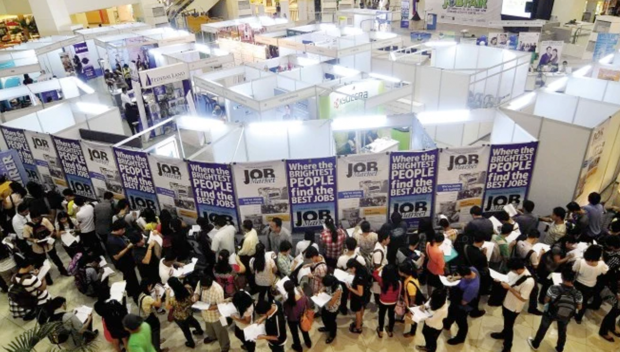 FILIPINOS in search of jobs flock to job fairs like this sponsored by the Philippine Daily Inquirer. FILE PHOTO

MANILA, Philippines—The head of a local think tank raised concern over the failure of the government to acknowledge a serious problem in employment—one in three Filipinos without jobs.

While top government officials are waiving the flag of victory over unemployment by pointing to numbers purportedly showing that the joblessness crisis eased last year, Sonny Africa, executive director of Ibon Foundation, said “there is nothing impressive” about the figures.

Malacañang said the easing of unemployment was a clear sign of effectiveness of the government’s COVID-19 alert level system.

The number was nearly 25 percent, or one in three. It was also among the highest unemployment rates in the world. In Southeast Asia, according to World Bank data, the average unemployment rate was just 2.9 percent even at the height of the pandemic in 2020.

The latest jobless figure measured by the SWS survey was similar to the 24.8 percent unemployment in September 2021, when the jobless rate was 25.7 percent which was lower than 37.4 percent in 2020 but way higher than 19.8 percent in 2019, the year COVID-19 struck. 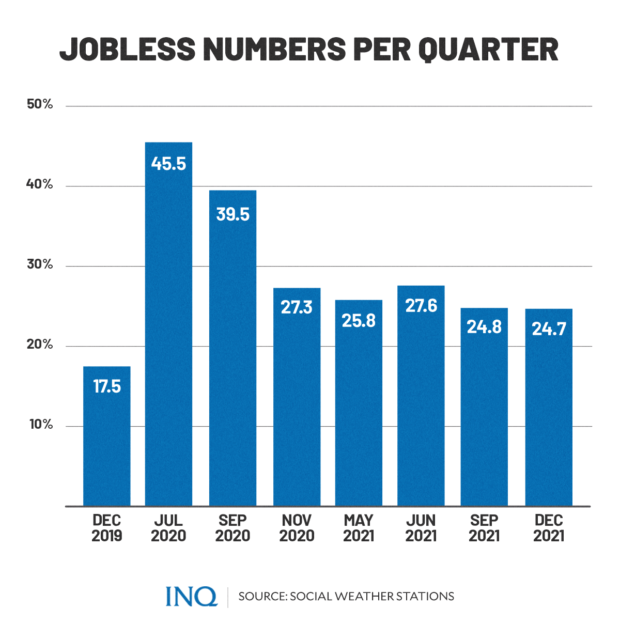 However, Africa told INQUIRER.net that there is nothing new with joblessness easing from the extremes it reached when the COVID-19 crisis was at its height in 2020, saying that “any kind of reopening will of course ease joblessness”. 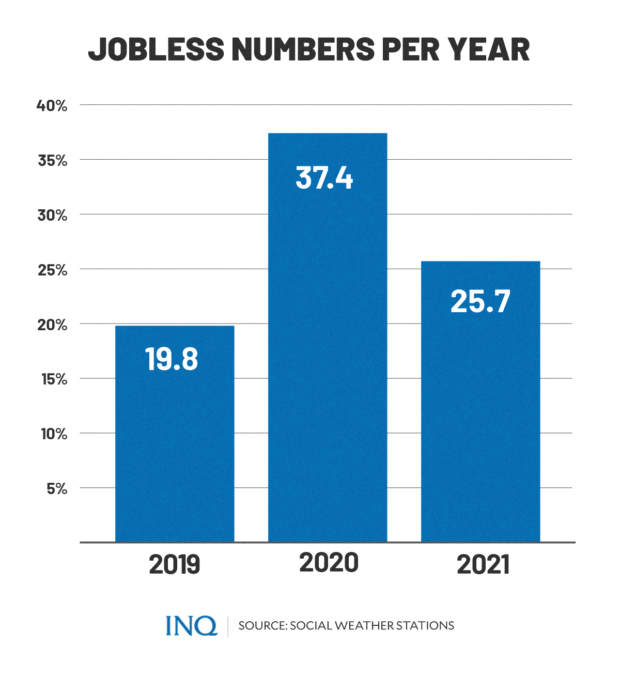 What should be stressed, he said, is if the economy was creating as many new jobs as before and, especially, for the growing number of people in need of work.

Africa said that the current SWS survey and the official Labor Force Survey (LFS) jobless rates clearly indicated that the economy still hasn’t recovered even just to its pre-COVID-19 levels.

“While employment seems to have increased, this appears to be a desperate job–seeking more than anything else, including to make up for collapsed family incomes,” he said.

Based on data from the Philippine Statistics Authority (PSA), the jobless rate in December 2021 was 6.6 percent or 3.27 million, way less than the numbers measured by SWS. But Africa stressed that this was because the government agency and SWS have different methodologies and sampling sizes.

Regardless, he said that the results of the SWS and PSA generally trend the same, which meant that their respective magnitudes differ but overall trends across years are similar. 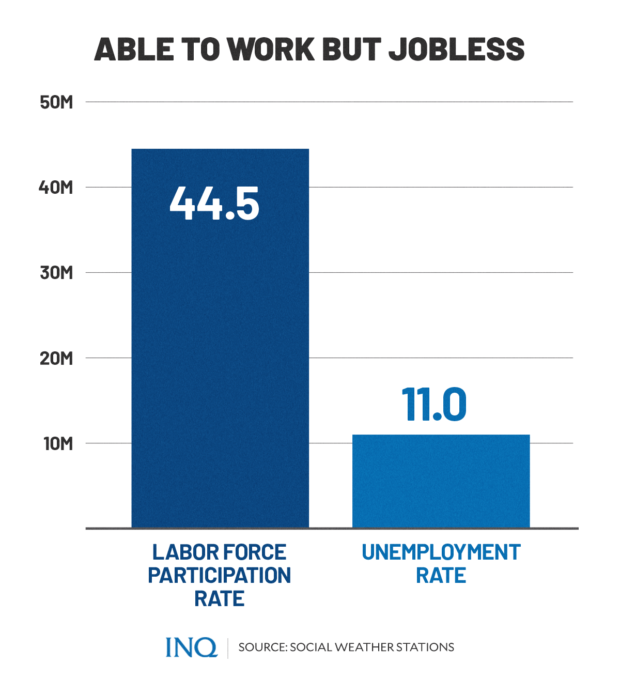 He stressed that what the SWS and PSA results clearly indicated was that unemployment still remains way higher than how it was before lockdowns were implemented to mitigate the spread of COVID-19.

“This affirms how simply reopening the economy is not enough to fix the considerable economic scarring due to the protracted lockdowns,” Africa said.

“Job creation is still restrained by repressed consumption from collapsed household incomes and by how smaller firms are having difficulty reopening amid uncertain market conditions,” he said.

Last February, the National Economic and Development Authority (Neda) said that from October to December 2021, it was only in October when Metro Manila was on the highest Alert Level 5.

Neda said that from late November to December, Metro Manila, Central Luzon, Calabarzon and the rest of the Philippines were already on Alert Level 2.

“The apparently sustained high level of unemployment despite reopening is extremely alarming for the corresponding household difficulties this implies as well for indicating that consumption spending and aggregate demand—the drivers of the economy—will remain repressed,” Africa said.

Ibon Foundation, he said, expected real unemployment to remain high even if there are already millions of jobless Filipinos not counted by PSA estimates.

Last April, Neda said that the easing of restrictions led to significant employment creation as the PSA said that in February 2022, 6.4 percent or 3.13 million were jobless.

However, Africa stressed that “economic managers likely blindly thought that simply reopening the economy would be enough and that there was no need to spend on fixing the economic scarring their protracted lockdowns caused”.

He said that employment observers are likewise highly concerned about the actual wages and incomes that families have: “Unfortunately, the government does not seem interested enough in such vital information to invest in the country’s statistical system and monitor this more frequently.” 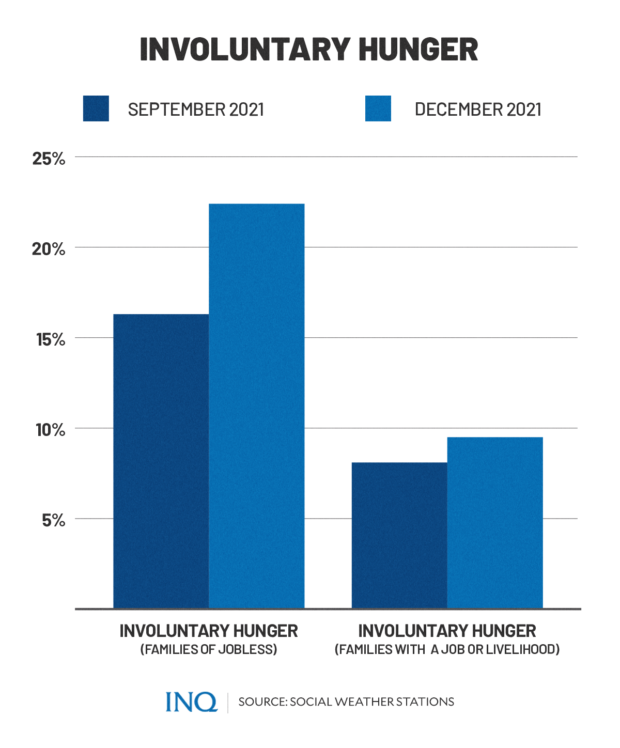 “The slight decline in the national jobless rate between September 2021 to December 2021 was due to a decrease of 5.9 points in the Visayas, combined with increases of 0.4 points in Metro Manila, 1.6 points in Balance Luzon, and 1.7 points in Mindanao,” it said. 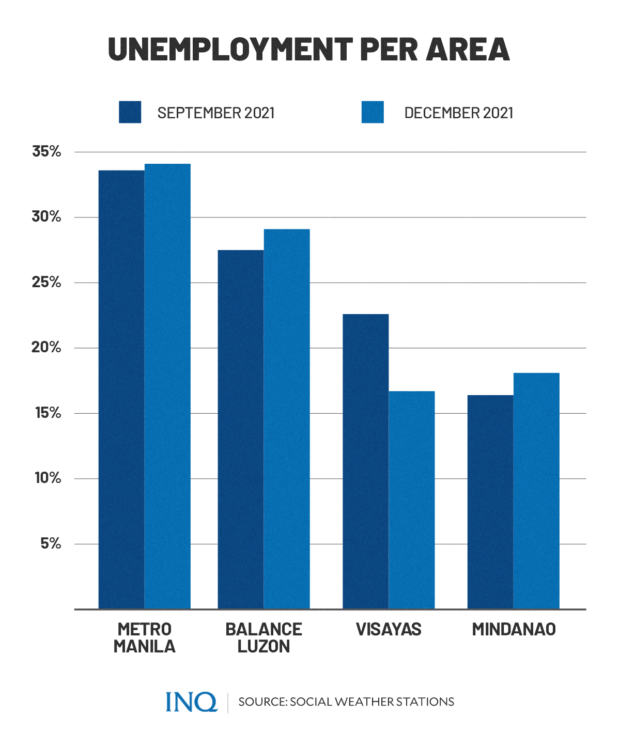 Challenge to next admin

Africa said that jobs are not only scarce but worsening in quality, stressing that out of the reported three million additional jobs since 2016, some 95 percent is just part-time work and barely one percent is full-time work.

“The next administration cannot be as dismissive as the current one and needs to take aggressive measures to boost household purchasing power and aggregate demand, such as through large cash transfers and a bold public employment program,” he said.

According to Africa, the high unemployment will be welcomed by employers who will use this to scare workers from demanding higher wages as well as to justify keeping wages low with the threat of these being unaffordable and higher unemployment drivers.

“It is more important than ever for the next administration to take the long view and make a commitment to full and decent employment with social protection the center of economic policies,” Africa said.

“This is the only way to make recovery from COVID genuinely inclusive rather than, as is currently the case, making the burden of adjustment be borne by ordinary Filipinos,” he said.

Data from Ibon Foundation showed that the annual average job creation in 2017 to 2019 was already the lowest of any administration in the post-Marcos era which only got worse after protracted lockdowns were enforced at the height of the pandemic.