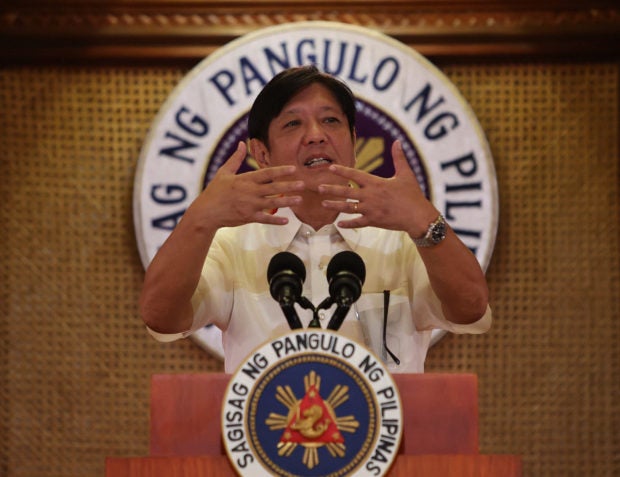 President Ferdinand Marcos Jr. holds his first press conference after presiding over his 1st cabinet meeting where his economic team gave a briefing about the country’s economic outlook at the Malacañang Palace on Tuesday, July 5, 2022. (File photo by MARIANNE BERMUDEZ / Philippine Daily Inquirer)

“No, because I know they’re wrong,” Marcos said in an exclusive interview in Malacañang Palace with actress Toni Gonzaga, who is his goddaughter in marriage.

Gonzaga had asked him if the tag hurt him.

“How many times have I been here in this room where he was in consultation with different groups? A dictator does not consult [people]. A dictator just says: ‘This is what you will do — whether you like it or not,” Marcos went on, speaking in a mix of Filipino and English.

“How many times have I watched caucuses here, have I watched meetings in this hall [with people] in different industries? He really talked to them, time after time: ‘What will we do? What do you really want?’ You know. So there was more consultation in his time than there have been in many following administrations,” he added.

People’s opinions about his father, he said, did not bother him.

“Because I know everything he did, he did with consultation with whoever. No matter what the system of government was. That’s why for me, you can say what you want. That’s your opinion. You’re wrong,” he said.

“It would hurt me if they were right. But they’re wrong,” he added.

Gonzaga then shifted the topic to martial law.

“Can I tell you what I learned in school?” she said. “What was taught to us about martial law is that your father wanted to stay in power. That’s why he declared martial law.”

“Martial law was declared because of the wars — the two wars we’re fighting on two fronts. And that is in the countryside,” Marcos said. “The CPP-NPA was fomenting revolution, they wanted to bring down the government through violent means.  The government had to defend itself.”

He was referring to the Communist Party of the Philippines and its New People’s Army.

“The second front was the secessionist movement down in the south led by MNLF,” Marcos went on, now referring to the Moro National Liberation Front.

“And Chairman Nur Misuari at that time — he started the uprising, the secessionist movement,” he continued. “And that eventually turned into violence, and then essentially war that was even supported — that’s the reason that my mother went to Libya because Libya was supporting the separatist movements here.”

“Those reasons were expounded at great lengths during my father’s time,” he said. “But, of course, things became polarized. So they [presumably the opposition] became enemies. So the enemies were the ones who wrote history. That’s what happened,” he added.

Marcos Sr. and his family were ousted from power in February 1986 in a bloodless revolt led by the opposition.

Marcos Sr. ruled for over 20 years, in an administration marred by issues of plunder, extrajudicial killings, illegal detention of political opponents, and enforced disappearances.

Critics accused the Marcos family of siphoning off around $5 billion to $10 billion worth of ill-gotten wealth. They said the family’s financial sources were not enough to produce that kind of wealth.

The Marcoses have consistently denied any wrongdoing, despite some cases that ended in conviction.

For one, the matriarch, Imelda Marcos was found guilty by the Sandiganbayan of transferring funds to Swiss foundations while she was holding two government posts in the 1970s.

The Marcoses insist that they have been wrongly judged, that Marcos Sr.’s tenure was a golden age for the country.

On one occasion, Marcos Jr. even sought changes in textbooks as some ill-gotten wealth cases had been dropped against them.