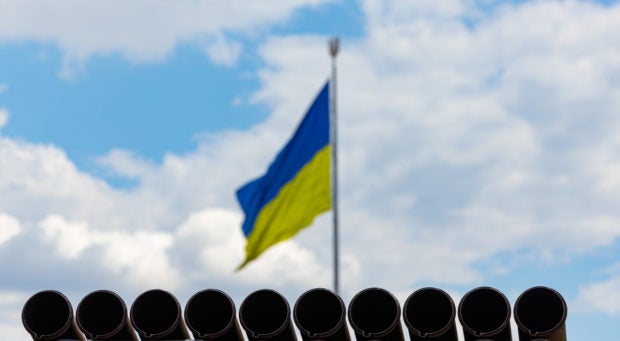 This file photo taken June 17, shows Ukraine’s flag at a museum in Kyiv. (Yonhap via The Korea Herald/Asia News Network)

SEOUL — North Korea said Friday that Ukraine has no right to take issue with its recognition of two breakaway regions in the war-torn country earlier this week, calling the measure a “legitimate exercise of sovereignty.”

On Wednesday, Ukraine announced its decision to sever diplomatic relations with North Korea for formally backing the independence of the pro-Moscow republics of Donetsk and Luhansk.

In response to a question by the North’s official Korean Central News Agency (KCNA) over the issue, a spokesperson for Pyongyang’s foreign ministry defended the move and criticized Ukraine.

“Ukraine, which had committed acts quite contrary to impartiality and justice in the state-to-state relations while aligning itself with the U.S. unreasonable and illegal hostile policy toward the DPRK in the past, has no right and qualification to take issue with the DPRK over its legitimate exercise of sovereignty,” the spokesperson said in a statement carried by the KCNA. DPRK stands for the North’s official name, the Democratic People’s Republic of Korea.

“The DPRK will as ever develop the bonds of friendship and cooperation with all other countries in the world that respect its sovereignty and are friendly to it, on the principles of sovereignty equality, non-interference and mutual respect,” the spokesperson added.

North Korea became the third country in the world to recognize the separatist entities, after Russia and Syria. It is widely seen as part of the Kim Jong-un regime’s efforts to improve ties with Moscow amid frosty inter-Korean ties and a halt to denuclearization talks with Washington.