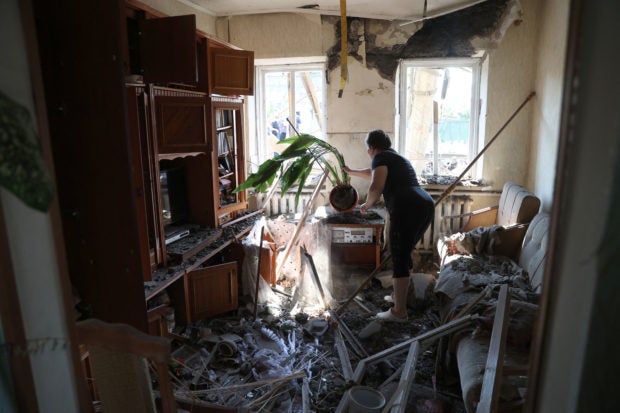 A woman clean her house from debris after a Russian missile strike in the town of Konstantinovka, Donetsk region on July 16, 2022 amid Russian military invasion of Ukraine. AFP

KONSTANTINOVKA, Ukraine — Leaning on her cane, Olga Dekanenko walks through the rubble and debris of her home in eastern Ukraine that was heavily damaged in a Russian strike in the early hours of Saturday.

Workers are pumping water out of a deep 10-meter-wide (30 feet) crater with a burst pipe outside Dekanenko’s house in Konstantinovka, an industrial town on the frontline of Ukraine’s war with Russia.

Her neighbours wearily look at the sight that has become all too familiar in the time of war. One woman covers her mouth in shock as she passes by but carries on without saying a word.

“This is the house where my two children were born,” she adds, picking up family photos out of the rubble.

In the upturned garden, her dog lies curled up and breathing heavily, still reeling from the shock of the morning’s events.

Dekanenko was asleep when it happened.

Her small bedroom overlooks the garden where the rocket landed. She woke up on the ground, covered in a mess of blankets, pillows and stones. 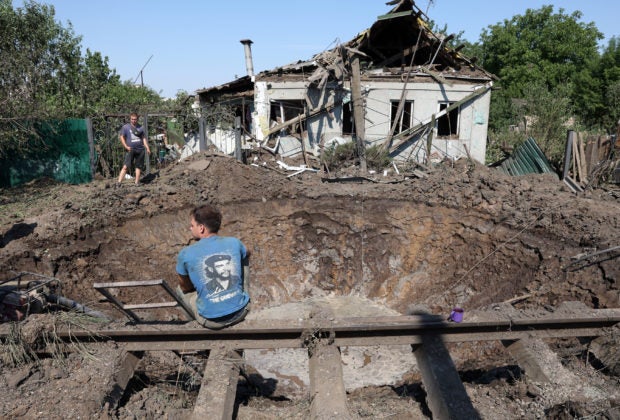 Communal service employees work around a crater after a Russian missile strike in the town of Konstantinovka, Donetsk region on July 16, 2022 amid Russian military invasion of Ukraine. AFP

Dekanenko calmly recalls her time working for one of Konstantinovka’s several metallurgical plants that made the town an industrial hub in the Soviet era.

She worked for a nickel factory that provided good pay and early retirement at the age of 50 because of the hazardous working conditions.

“I can’t say that I regret this period, but, of course, us old people have a nostalgia for the Soviet era,” Dekanenko says with a smile.

But she admits that “it’s not the same for young people”.

Her younger sister Nina Chuprino recalls that until the 1960s the region of Donetsk, where their town is located, was called “Stalin region” after the Soviet leader.

After the fall of the USSR in 1991, factories in the town of some 70,000 people started shutting down one by one and many residents decided to leave.

In this industrial region with many fluent Russian speakers, many feel they have been abandoned by Kyiv, cultivating pro-Moscow sentiment.

Donetsk and neighboring Lugansk lie in the Donbas coal mining region in eastern Ukraine that has become the primary target of Russia’s February invasion.

Parts of the region have been controlled by Russia-backed separatists since 2014. Konstantinovka was captured by the rebel forces the same year but was retaken by Kyiv’s troops a few month later. 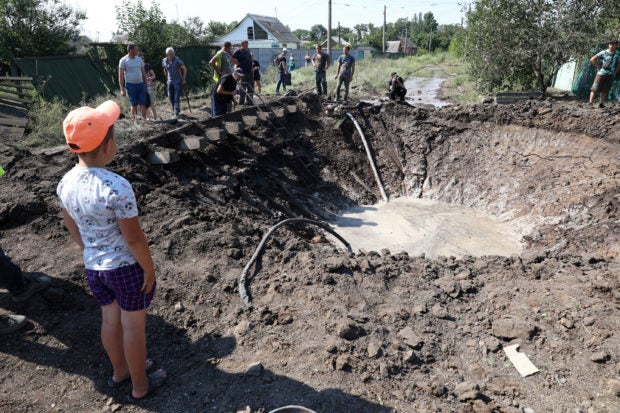 A boy looks at communal service employees working around a crater after a Russian missile strike in the town of Kostiantynivka, in the Donetsk region, on July 16, 2022. AFP

The neighborhood called the “Red” district — another nod to the town’s Soviet past — has been hit three times over the past four days, as Russia intensifies its offensive in the east.

“There may be Ukrainian soldiers in the school,” nestled among the residential buildings, says a 60-year-old man, who preferred not to give his name.

Several residents had given the same explanation to explain the frequent strikes, but without animosity.

If Ukrainian troops go to hide there, one resident says pointing to a large disused building, “next time there will be carnage”.

Moscow regularly accuses Ukrainian forces of hiding in schools, hospitals or among civilians.

Back in front of Dekanenko’s destroyed home, 15-year-old redhead Margarita cannot hold back her tears.

“I’m afraid there won’t be anything left of our town soon. I think the Russians will come eventually… hopefully the army can defend us,” she says with a trembling voice.

Russian forces, which now have control of nearly all of the Lugansk region, have been pushing for several weeks to seize Donetsk as well.

“We are just workers, peasants. It doesn’t matter who comes. If we are given work, a normal life, then it’s fine,” sighs a man, before turning on his heels and walking away.