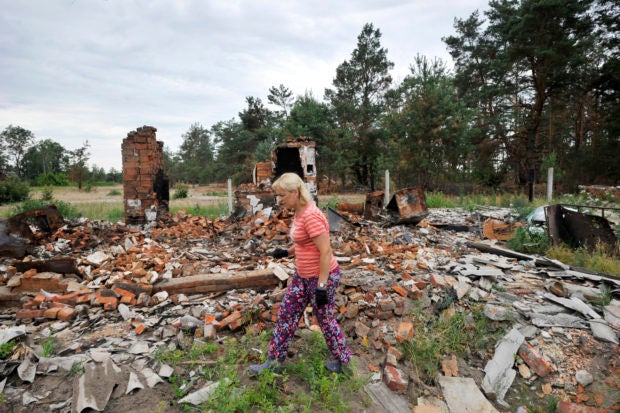 A woman walks amid debris of a house destroyed during Russia’s invasion of Ukraine in the village of Teterivske, Kyiv region on July 9, 2022. AFP

PRAGUE — The war in Ukraine has destroyed forests, polluted fields and filled them with mines, and contaminated water, a Kyiv official told EU environment ministers who pledged help on Wednesday.

Ukraine has also registered at least 260 cases of “ecocide” and more than 2,000 cases of environmental damage, while 20 percent of the country’s protected areas are under threat.

“For example, if a rocket comes to a national park, where we had a forest, and when 1,000 hectares (10 square kilometers) of forest are burned by the fire, we think that it’s ecocide,” Strilets told AFP.

“Why does Russia make a war to destroy wild animals? Wild animals can’t protect themselves, but they launch rockets at them. Is this not ecocide?” he added.

“Drinking water is a problem too… the Russians are destroying water treatment plants,” he said, adding western Ukraine, receiving refugees from the east, currently faced problems with water supply. 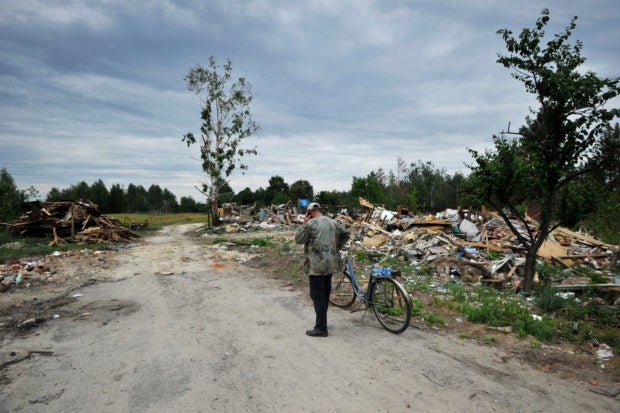 A man speaks on his mobile phone next to houses destroyed during Russia’s invasion of Ukraine in the village of Teterivske, Kyiv region on July 9, 2022. AFP

The EU environment ministers have pledged help to Kyiv, with Czech Minister Anna Hubackova saying members of the 27-nation bloc could help with mapping and analysing the damage and providing financial help.

“There are many ideas, many offers which are similar (but) I think they can be coordinated,” Hubackova said.

Strilets told AFP in an interview that Germany had offered 20 million euros (dollars) to help Ukraine repair its natural resources.

“All European countries are ready to help us. It’s very useful to be here today. I hear their ideas… and I’m sure that it will help me to prepare a little bit new agenda of a green course of Ukraine,” he added.

German Minister Steffi Lemke said it was necessary to provide “immediate aid to critical infrastructure” without waiting for the post-war reconstruction of Ukraine.

Hubackova added Prague could use its experience of spending four decades under a Moscow-led totalitarian communist rule in 1948-1989 and help Ukraine clear mined areas.

“We had the Russian army here, we did clear mines, we have this experience. So if we were asked to help with… clearance, we could quite happily do this,” she said.