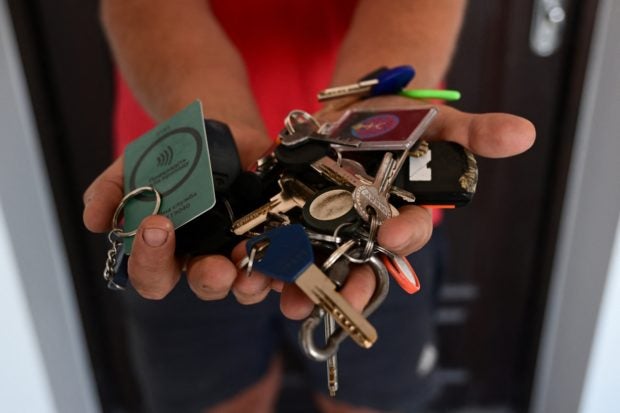 Biologist and gardener Yevgen Yelpitiforov, 37 years old, shows the keys of houses and apartments entrusted to him by people who fled the war, in Irpin, Kyiv region, on July 1, 2022. AFP

IRPIN, Ukraine—Yevgen Yelpitiforov counts out the keys of the homes he has been given to look after by friends who have fled Ukraine since Russia invaded.

Since the war began the 37-year-old biologist, who works as a gardener to make ends meet, has added another notch to his crowded CV — as a key-keeper.

For the last few months he has been criss-crossing the devastated Kyiv suburbs of Bucha and Irpin looking after homes and houseplants abandoned when their owners fled for their lives.

“After the liberation, many of my acquaintances asked me to come and see if their houses were still intact, if they had windows or doors,” he told AFP.

Yevgen would go around and turn on a light to ward off looters, clear up the broken glass, send items on to their owners, or do a bit of gardening.

Soon — as word got around — the keys began accumulating. They would be “sent by mail, or I would take them from a neighbor, or from under the doormat.”

Some keys came with coffee or chocolates, as tokens of gratitude, as Yevgen had been doing it all from the goodness of his heart.

Returning friends would often find a little present from him, a bouquet of flowers or fruit to make them feel “happy”.

“If it was me, they would have helped me too,” he insisted. “These are my friends, all the keys I have are from the people I know.”

Gas mask for the fridge

But sometimes the job stank, literally. “The hardest part” was clearing out rotten food from fridges and freezers left for weeks without electricity.

“The smell is so bad you could pass out,” he said.

Which is why he is so grateful that someone gave him a Soviet-era gas mask.

Even after a thorough cleanup, apartments still need to be aired out a few more times because “the smell remains for a week or two”. 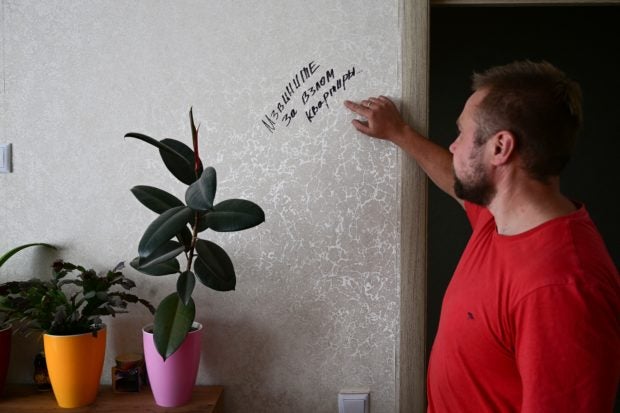 Biologist and gardener Yevgen Yelpitiforov, 37 years old, shows an inscription wrote in Russian on the wall of an apartment in Bucha, Kyiv region, that reads “Sorry for breaking down the door”, in one of houses and apartments entrusted to him by people who fled the war, on July 1, 2022. AFP

In Bucha, which has become a symbol of crimes carried out by Russian troops, Yevgen parked his car in front of a brand new apartment complex, most of whose windows were blown out.

Nothing but a pile of metal remained of one car parked outside while another was riddled with shrapnel.

Yevgen stayed just long enough in a small apartment to water some plants. The only sign of the war was a note on the wall left by Russian soldiers, “Excuse us for breaking in.”

The front door, like most others on this floor, had to be replaced.

A television voice actor before the war, Oleksandr Furman spent April as a key-keeper, looking after six Kyiv apartments abandoned by his friends.

His most unusual mission was tidying away the sex toys his ex-girlfriend and her new partner left behind after fleeing the city just after the invasion began in the early hours of February 24.

“She told me, ‘I can’t ask my mother to do it,'” Oleksandr said, bursting out laughing. “I hid them well…

“I was lucky. I wasn’t shot at, missiles didn’t fall near me,” he said. And by helping the actor felt he was “doing my duty by those who suffered”.

Back in Irpin, Yevgen filmed some potted plants with his smartphone in a duplex overlooking a school whose roof was blown off. He would send the video to the owners who are abroad.

At his next stop, workers were putting a new roof on a house with burned walls. He paused to tend to a young evergreen shrub severely scorched by the flames.

“It reminds me of the Ukrainian people,” Yevgen said.

“On one side it is burned, on the other it has the strength to keep growing.”