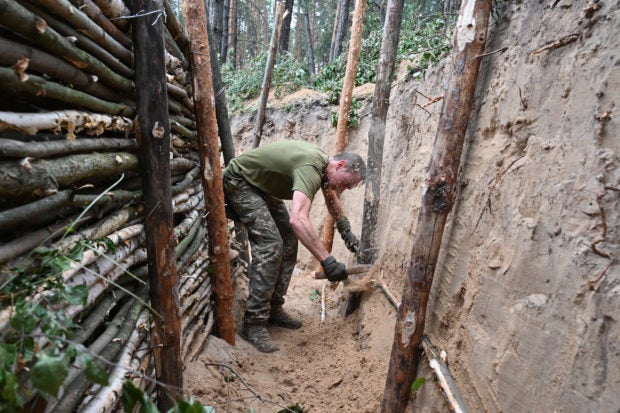 A Ukrainian serviceman builds a trench on a position near Kharkiv on July 5, 2022, amid the Russian invasion of Ukraine. AFP

Russian forces are “massively shelling” the eastern city of Sloviansk, its mayor says, as Moscow pushes deeper into the Donetsk region after taking neighbouring Lugansk at the weekend.

Sloviansk mayor Vadim Lyakh says the centre and north of the city are being bombarded and urges residents to take shelter.

At least six people and 19 have been injured since Sunday in Sloviansk, one of two major Donetsk cities in Moscow’s sights, along with Kramatorsk.

Russian forces also continue to target the northeastern city of Kharkiv, a month after being driven back from its northern outskirts.

Moscow claims up to 150 Ukrainian troops have been killed in Russian strikes on the city in the past 24 hours.

Ukraine and its allies meeting in the Swiss city of Lugano agree a set of principles for rebuilding the war-torn country, including the need to stamp out corruption and uphold the rule of law.

The former Soviet state has long been ranked among the world’s most corrupt countries by Transparency International.

Russia says it is investigating the torture of Russian soldiers held prisoner in Ukraine that were recently released as part of a prisoner swap.

The Russian Investigative Committee, which probes major crimes, says one of the 144 Russian soldiers exchanged last week related being treated by doctors without an anesthetic and being “beaten” and “tortured with electricity” in captivity.

The soldier allegedly said he was left without food and water for days. Another soldier who had his leg amputated was cited as saying he was badly beaten and that a Ukrainian medic poked at his wound.

Nato launches the process to ratify Sweden and Finland as the newest members of the 30-member defense alliance.

“This is a good day for Finland and Sweden and a good day for Nato,” the alliance’s chief Jens Stoltenberg tells reporters in a joint statement with the Swedish and Finnish foreign ministers.

“With 32 nations around the table, we will be even stronger and our people will be even safer as we face the biggest security crisis in decades,” he says.

Ukraine’s Maryna Viazovska becomes only the second woman to be awarded the prestigious Fields medal, dubbed the Nobel prize for mathematics,

Viazovska, a 37-year-old Kyiv-born math professor who works in the Swiss city of Lausanne, shared the prize with three others.

At the ceremony in Helsinki, she pays tribute to Yulia Zdanovska, a 21-year-old mathematician killed by a Russian missile attack on the Ukrainian city of Kharkiv in March.

“When young people die you think, ‘What is the point of my work as a teacher if young, talented people are just wasted in this terrible war?,” she said.

Russian cosmonauts on board the International Space Station congratulate Russian forces on capturing the eastern Ukrainian region of Lugansk by being photographed with the flag of the area’s pro-Russian rebels.