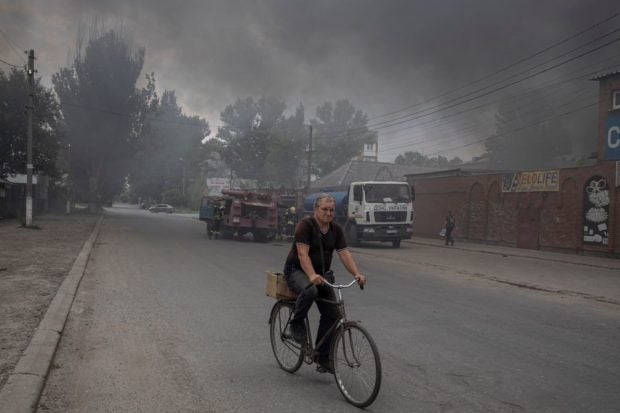 A man rides a bicycle along a street at the market after shelling, as Russia’s attack on Ukraine continues, in Sloviansk, Donetsk region, Ukraine, July 5, 2022. REUTERS

SLOVIANSK, Ukraine/KYIV — Russian troops are engaged in heavy fighting supported by widespread artillery fire as they launch a major offensive for Ukraine’s Donetsk region, Ukrainian officials said, a day after Moscow declared victory in the neighboring province of Luhansk.

Donetsk and Luhansk comprise the Donbas, the industrialised eastern part of Ukraine that has seen the biggest battle in Europe for generations. Russia says it wants to wrest control of the entire Donbas from Ukraine on behalf of Moscow-backed separatists in two self-proclaimed people’s republics.

After Russian forces on Sunday took control of Lysychansk, the last bastion of Ukrainian resistance in Luhansk, Ukrainian officials said they now expect Moscow to focus its efforts especially on the cities of Sloviansk and Kramatorsk in Donetsk.

There was heavy fighting at the edge of the Luhansk region, its governor Serhiy Gaidai told Ukrainian television, saying Russian regular army and reserve forces had been sent there in an apparent effort to cross the Siverskiy Donets River.

“They are sustaining quite heavy losses,” Gaidai said.

“Some battalions have been moved there to make up the numbers they need….They are not taking all their wounded with them. The hospitals are full to bursting as are the morgues.”

“There is still a great deal of shelling in both Luhansk and Donetsk regions. They are shelling everything in their path.”

Reuters could not independently verify his comments.

A Reuters reporter at the scene saw yellow smoke billowing from an auto supplies shop, and flames engulfing rows of market stalls as firefighters tried to extinguish the blaze.

Donetsk regional governor Pavlo Kyrylenko said Sloviansk and nearby Kramatorsk had suffered heavy shelling overnight. “There is no safe place without shelling in the Donetsk region.”

Russian President Vladimir Putin launched the invasion of Ukraine on Feb. 24, calling it a “special military operation” to de-militarise the country, root out nationalists and protect Russian speakers.

Kyiv and the West say Russia is waging an unprovoked, imperial-style land grab in its fellow ex-Soviet republic, and accuse Moscow of war crimes. 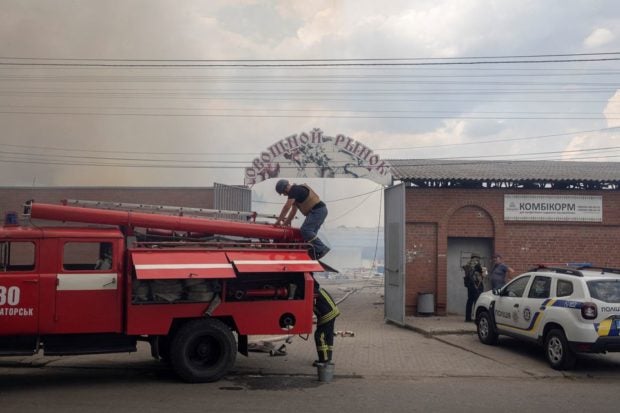 Firefighters work to extinguish a fire at the market after shelling, as Russia’s attack on Ukraine continues, in Sloviansk, Donetsk region, Ukraine, July 5, 2022. REUTERS

Lysychansk, once a city of a 100,000 people, lies in ruins. Buildings are scorched and holed by shells, cars up-ended and streets strewn with rubble, testament to the ferocity of the battle it endured.

Tatiana Glushenko, a 45-year-old Lysychansk resident, told Reuters there were people still sheltering in basements and bomb shelters, including children and elderly.

Glushenko said she didn’t think she would be safe in other parts of Ukraine, so remained in Lysychansk with her family.

“All of Ukraine is being shelled: western Ukraine, central Ukraine, Dnipro, Kyiv, everywhere. So we decided not to risk our lives and stay here, at home at least,” she added.

Glushenko now hopes peace will return to her ruined city, but for elderly residents Sergei and Evgenia the prospect of rebuilding from the ruins is daunting.

“We have to get out of here somehow,” said Sergei, sitting in a dark shelter with a lone flash light

“The roof is broken. You have to fix it, but how and how do you pay for it?…Winter is coming soon too,” said Evgenia.

“They are hunting down pro-Ukraine residents. They are making deals with collaborators, they are identifying apartments were servicemen lived, breaking in and taking clothing,” he said.

“Everything is being destroyed. Entire book collections in Ukrainian. This is deja vu – 1939 with Nazi Germany.”

Reuters could not immediately verify this report.

Russia says it does not target civilians. 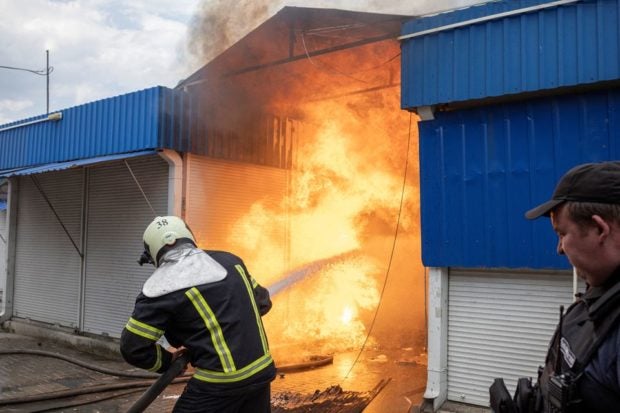 Firefighters spray water onto fire at the market after shelling, as Russia’s attack on Ukraine continues, in Sloviansk, Donetsk region, Ukraine, July 5, 2022. REUTERS

The remarks by the chairman of the lower house of parliament suggested Russia may expand its stated war aims beyond the Donbas, having abandoned offensives on the capital Kyiv and second largest city Kharkiv in the face of fierce resistance early in the conflict.

In another sign Russia is bracing for a long war, the Duma passed two bills in their first reading that would allow the government to oblige firms to supply the military and make staff work overtime to support the invasion. read more

Johnson updated Zelenskiy on the latest deliveries of British military equipment, including 10 self-propelled artillery systems and loitering munitions, which would be arriving in the coming days and weeks, a spokesperson said.

Russia’s invasion has killed thousands, displaced millions and flattened cities, particularly in Russian-speaking areas in the east and southeast of Ukraine. It has also raised global energy and food prices and raised fears of famine in poorer countries as Ukraine and Russia are both major grain producers.

Ukraine has asked Turkey to help probe three Russian-flagged ships as part of Kyiv’s efforts to investigate what it says is the theft of grain from Russian-occupied territory, according to official documents. Russia denies stealing Ukrainian grain.