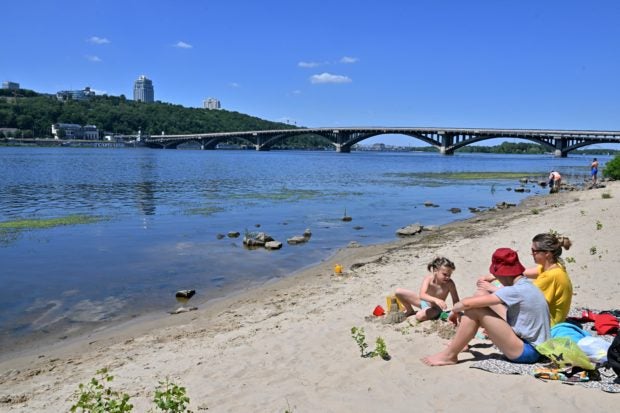 A family sits on the sandy shores of the Dnipro river that runs through the Ukrainian capital of Kyiv on July 2, 2022. AFP

KYIV, Ukraine—Ivan Sukhanov and his family used to holiday by the Black Sea. This year, the family from Kyiv dreamt of traveling to Egypt. Then Russian troops invaded.

Now, they’re going no further than the banks of the Dnipro river in the Ukrainian capital to have as normal a holiday as they can, in very abnormal circumstances.

“We wanted to show the children the pyramids, but the war ruined our plans,” says the 41-year-old electrical engineer.

“This year, we’re enjoying what’s around Kyiv, the lakes, the parks… We’re relaxing as best we can”.

But on the first weekend of July, despite temperatures close to 30 degrees Celsius (86 degrees Fahrenheit), no one is rushing to lay claim to a prime spot with a beach towel.

The city is still living in slow motion, even though Russian troops withdrew from the outer northern and northeast suburbs three months ago to concentrate their offensive on the Donbas region in eastern Ukraine. 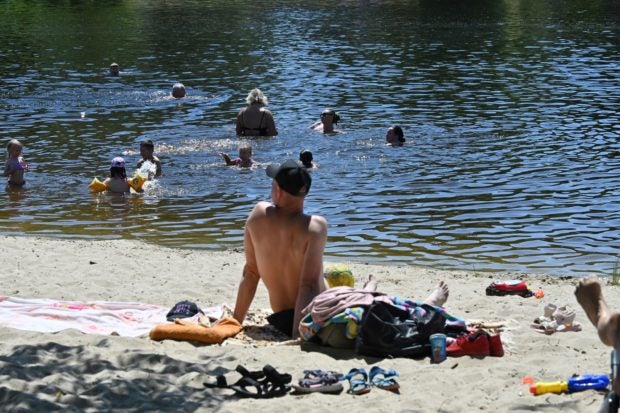 A man sunbathes as he watches others swimming from the sandy shores of the Dnipro river that runs through the Ukrainian capital of Kyiv on July 2, 2022. AFP

Compared to the rain of bombs in Donbas and the deadly strikes in the south of the country, Kyiv is now relatively calm.

“We’re getting used to it,” admits Sukhanov, four months after Russian troops marched into his country on February 24.

So, when air-raid warnings sound, “we don’t go to the shelters, we don’t follow the security rules… We live as best we can, hoping that everything will be OK”.

But anxiety that worse is yet to come dominates daily life. A missile killed one person and wounded four others on June 26, in a neighborhood near the centre of Kyiv that had already been hit twice.

Many also say they are affected by the air raid warnings that still sound regularly.

Add to that the daily curfew, from 11:00 pm to 05:00 am, and sandbags protecting statues and official buildings, and it’s hard to forget you are living in a country at war. 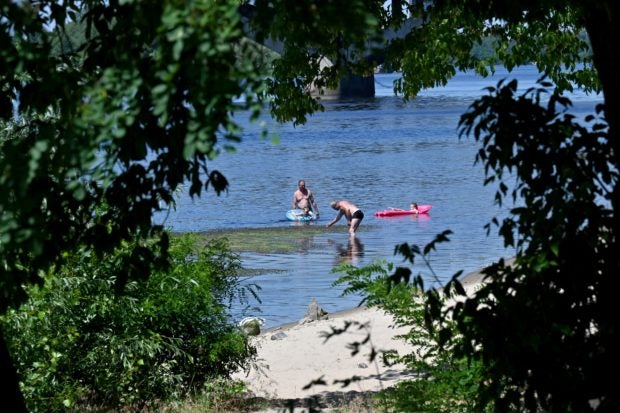 People bath in the Dnieper river that runs through the Ukrainian capital of Kyiv on July 2, 2022. AFP

Vera Sapyga is also trying to enjoy herself on a Kyiv beach but cannot hide her anxiety.

She returned to the capital a week ago, having left on the first day of the war for a village in western Ukraine with her five-year-old daughter.

She is already looking forward to leaving again.

“In terms of morale, it’s really hard,” the 37-year-old says. “I worry a lot, with the warning sirens, the news. Every day I cry. I have never experienced such stress.”

Sapyga plans to travel again with her daughter next week, heading to London to stay with a family who has offered to support Ukrainians.

She’s been exiled before, back in 2014 when Russia annexed the Crimean peninsula where she and her husband then lived.

If she manages to get to the British capital, she doesn’t know how long she will stay.

“It’s very difficult to plan anything”.

That is an expression repeated daily in Kyiv, where no one dares predict how long the war will last.

“At first the experts assured us that the war would end quickly, then they said, ‘It will be over by Constitution Day’ (June 28), then by Independence Day (August 24), now they say nothing,” says Liudmila Iashchuk, a 55-year-old sitting with her husband at one of the few cafes open on the beach.

“We hope it will be over by the end of the year, but now everyone is talking about a long conflict,” says Sukhanov.

The uncertainty fuels incessant rumours of a new Russian offensive on Kyiv.

First they were allegedly going to attack on June 22, the anniversary of the 1941 Nazi invasion of the Soviet Union. Then word was that it would happen on Constitution Day, explains Ianna Khlinina, 33, out sunbathing with her husband.

Neither she nor anyone else in the city, however, seems to doubt Ukraine’s final victory over Russia.

“All that’s left is to make it happen on the ground.”