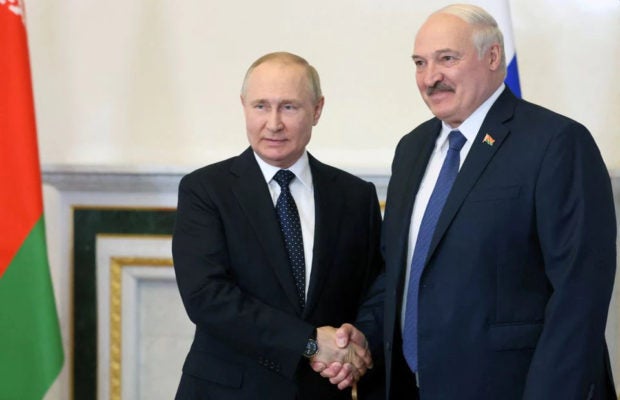 The president of Belarus — Kremlin leader Vladimir Putin’s closest ally — said on Sunday his ex-Soviet state stood fully behind Russia in its military drive in Ukraine as part of its longstanding commitment to a “union state” with Moscow.

Alexander Lukashenko, in power since 1994 and accused in the West of human rights abuses, has allowed Russian troops to use his country’s territory in invading Ukraine.

Ukrainian President Volodymyr Zelensky said the Belarusian leader’s statement amounted to a “signal”, with his actions to be watched carefully. Some Ukrainian officials suggest Belarus could soon become directly involved in the conflict.

Addressing a ceremony marking the anniversary of the World War Two liberation of Minsk by Soviet troops, Lukashenko said he had thrown his weight behind Putin’s campaign against Ukraine “from the very first day” in late February.

“Today, we are being criticized for being the only country in the world to support Russia in its fight against Nazism. We support and will continue to support Russia,” a video on the state BelTA news agency showed Lukashenko telling the gathering.

“And those who criticize us, do they not know that we have such a close union with the Russian Federation?…That we have practically a unified army. But you knew all this. We will remain together with fraternal Russia.”

Belarus has been committed to a “union state” with Russia since the mid-1990s, but little progress has been made on implementing the plan and in the past year Lukashenko has insisted that his country must retain its “sovereignty”.

Lukashenko has, however, become increasingly dependent on the Kremlin since, with Russian support and a security crackdown, he contained mass protests by demonstrators accusing him of rigging his re-election in 2020.

Zelensky, quoted by Ukrainian media, told reporters in Kyiv that Lukashenko’s comments were a “dangerous” development.

“Lukashenko’s statement about a unified army with Russia is, above all, dangerous for the Belarusian people,” Zelensky said alongside Australia’s prime minister.

“He must not drag Belarus into a Russian war of invasion against Ukraine. I believe this is a dangerous signal. And I believe that we will all see the results of this signal.”

A senior Ukrainian intelligence official last week said the risk was low of a direct invasion of Ukraine by troops from Belarus.

But the mayor of Lviv, Andriy Sadoviy, said at the weekend that the situation on the Belarusian border was unpredictable and he had convened a meeting of city officials to work out contingency plans in case of an escalation.