What next for Putin in Ukraine fight? | Inquirer News 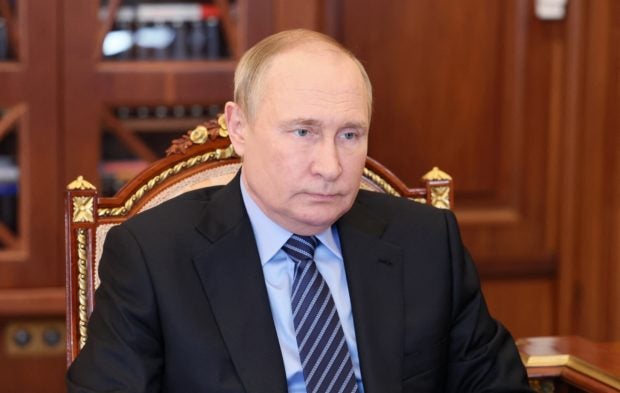 Russian President Vladimir Putin meets with Artyom Zdunov, the head of the Republic of Mordovia, in Moscow on July 5, 2022. AFP

PARIS — Russian President Vladimir Putin must now decide his next steps in the five-month invasion he started in February.

After Russian troops captured the strategic Ukrainian city of Lysychansk on Sunday, here are five different options raised by security experts who spoke with AFP:

Russian forces appear on course to take full control of the Donbas region that was already partly held by pro-Kremlin separatists before the February 24 invasion.

With Lysychansk and its twin city Severodonetsk captured in the past weeks, Putin’s troops “can hope to take Sloviansk and Kramatorsk and the surrounding regions,” said Pierre Grasser, a researcher at Paris’ Sorbonne university.

Sloviansk in particular is home to “a relatively welcoming population — at least those who have remained there” rather than fleeing the fighting, he added.

But there may be limits to how far the Russians can press into their neighbour’s territory.

“Their steamroller works well near their own borders, their own logistical centres and their airbases. The further away they get, the harder it is,” said Pierre Razoux, academic director of the Mediterranean Foundation for Strategic Studies (FMES).

Southern Ukrainian city Kherson was one of the first to fall to Russian forces in the opening days of the war.

But Russia’s grip on the country’s Black Sea coast is not secure.

“Counter-attacks by Ukraine in the south… place Russian forces in a dilemma. Do they sustain their eastern offensive, or do they significantly reinforce the south?” said Mick Ryan, a former general in the Australian army.

The question is all the more pressing as “the war in the south is a front of greater strategic importance” than the Donbas, he added.

Claiming territory along the coast could allow Moscow to create a land bridge to the Crimean peninsula, which it annexed in 2014, while both sides want to control Ukraine’s Black Sea ports.

Ukraine’s second-largest city Kharkiv is close to the northeastern border with Russia — and located in a pocket still controlled by Kyiv that could yet be cut off by Russian forces.

“If the Ukrainians collapse and Kharkiv is completely isolated, the Russians could force them to choose between committing to defend the city or taking the pressure off in the south towards Kherson,” said Pierre Razoux.

It will be up to President Volodymyr Zelensky and Ukrainian commanders “to deploy their units so as to prevent a big summer breakthrough” that could encircle Kharkiv, he added.

Home to 1.4 million people in peacetime, a siege of Kharkiv could be a bloody affair lasting up to a year, Razoux said.

While the West has so far kept up a mostly united front of sanctions and support for Ukraine, continued Russian advances could drive the allies’ judgements of their interests apart.

“The goal for Russia is to continue to grind down Ukrainian forces on the battlefield, while waiting for the political will to support Ukraine to fade among Western countries,” said Colin Clarke, research director at the Soufan Center think-tank in New York.

Deliveries of Western military aid have been too slow and too small to turn the battle decisively in Kiev’s favour.

Meanwhile, the war’s inflationary impact on basics like food and energy may gradually turn public opinion away from the strong initial support for Ukraine.

“The Americans could tell the Ukrainians ‘you can’t go on’,” said Alexander Grinberg, an analyst at the Jerusalem Institute for Security and Strategy.

Russia itself is suffering heavy costs from Western sanctions, battlefield casualties and losses of military materiel.

“Putin will be forced to negotiate at some point, he’s bitten off more than he can chew,” said Colin Clarke.

In late June, Kremlin spokesman Dmitry Peskov already raised the option of talks — on condition of “applying all the conditions set by Russia”, which remain unacceptable to Kiev.

But his control over domestic information means the Russian leader has a free hand to tell the public that his objectives have been achieved and justify a pause in the fighting.

A bigger challenge might be divisions on the Ukrainian side.

Hardliners and military leaders would “refuse any compromise with Russia” even if Zelensky were willing to strike a deal, said Pierre Razoux.

“They could tolerate a frozen conflict, but not a defeat.”