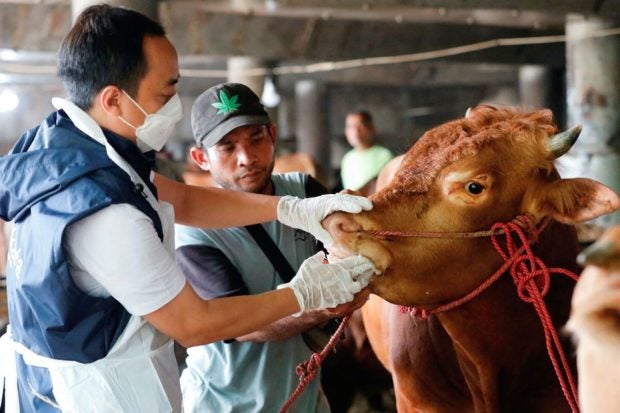 A Marine and Agricultural Food Security officer inspects a cow at a cattle shop to prevent the spread of foot and mouth disease in Tanjung Priok, North Jakarta, Indonesia, June 24, 2022. REUTERS

JAKARTA — An outbreak of foot and mouth disease in Indonesia threatens to disrupt a ritual of slaughtering animals to mark the festival of Eid al-Adha this year, with livestock traders in the world’s largest Muslim-majority nation bemoaning low sales.

Eid Al-Adha, known as the “Festival of Sacrifice”, is one of the main holidays in the Islamic calendar and this year falls on July 9.

In the lead up to celebrations, makeshift pens housing cows and goats typically appear around busy thoroughfares in the Indonesian capital and around the country. Traditionally, devout Muslims slaughter the animals and share the meat with the poor.

But this year the spread of foot and mouth disease (FMD), a contagious viral disease that impacts cattle, sheep, goats and pigs, has significantly dampened sales.

“This year is a year of loss for us,” said Jamal Lulay, a trader in West Java who has only sold 50 cows this year.

“Before COVID, we could sell up to 330 cows, and during COVID it was around 170… This year sales have dropped drastically.”

Indonesia had launched a nationwide livestock vaccination programme in an attempt curb the outbreak that began this May. 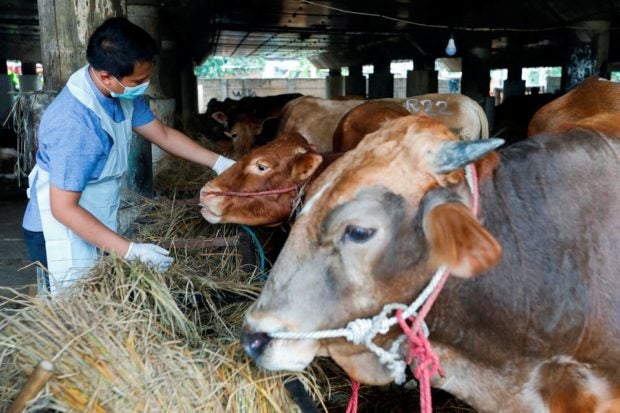 A Marine and Agricultural Food Security officer inspects a cow at a cattle shop to prevent the spread of foot and mouth disease in Tanjung Priok, North Jakarta, Indonesia, June 24, 2022. REUTERS

More than 317,000 animals have been infected in 21 Indonesian provinces, largely on the most populated islands of Java and Sumatra, with more than 3,400 animals culled, according to government data.

While the disease can be lethal for animals, it is not generally considered a threat to human health.

“People’s enthusiasm for sacrifice has not been diminished, but they are more worried about the health (of the animals),” said Muhammad Husein al Bana, a livestock trader in Jakarta.

Until this May, the Southeast Asian country had been free of FMD since 1986, a status recognised by the World Organisation for Animal Health in 1990.

“Ultimately it is the consumer’s decision,” said Iskandar Saputra, a Jakarta buyer still willing to take the risk.

“I think the cows sold here are safe and healthy.”

Read Next
Russia’s Lavrov calls for efforts to protect international laws
EDITORS' PICK
House energy committee chair Arroyo bats for cheap electricity
Reignite your passion with the vivo Y35
Individuals affected by ‘Karding’ now over 157,000
Karding damage to infrastructure at P23M
Bongbong Marcos says PH ‘open for business’ with new Clark Airport terminal
Newbie gamers are in for a treat with the power-packed feature of vivo Y16
MOST READ
LPA enters PAR, may develop into tropical depression
Angelica Panganiban ‘duguan, sugatang mom’ one week into breastfeeding
Security guard shoots 2 other guards dead inside Makati subdivision
Badoy not with Office of the President, NTF-Elcac, under Marcos admin — solon
Don't miss out on the latest news and information.