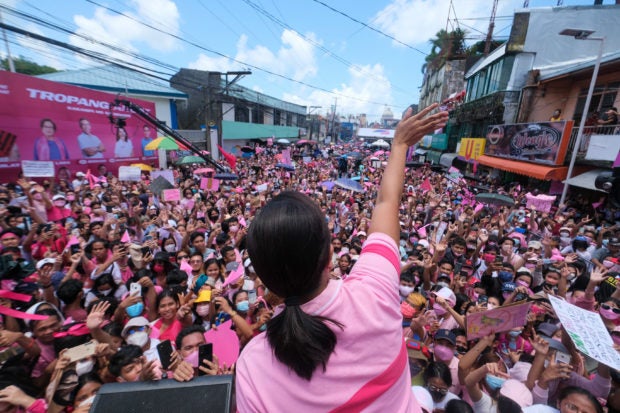 The energy is high during the early morning “Sorsogon Grand Rally: Angat Buhay, Bicolandia!” for fellow Bicolano, presidential candidate Vice President Leni Robredo, and running mate, Senator Kiko Pangilinan on Friday, May 6, 2022. Thousands of Sorsoganons, the province’s local officials, and celebrities attend the event which is Robredo’s first of three grand rallies Friday. She will proceed to Legazpi City in Albay by afternoon, and in the evening, she will return to her hometown, Naga City, Camarines Sur. (VP Leni Media Bureau)

MANILA, Philippines — Vice President Leni Robredo on Friday reassured supporters and volunteers who were getting anxious as Election Day draws near.

In an ambush interview, Robredo urged them to be faithful and remember that all of them gave their all during the 90-day nationwide campaign to win the presidency for her and the vice presidency for running mate Francis “Kiko” Pangilinan, as well as the senatorial bid for the tandem’s slate.

Robredo narrated how she and her team and the volunteers were the most hardworking, as they barnstormed as many areas – near and far – across the country and conducted house-to-house efforts at the tail end of the campaign.

(I am not feeling nervous because I did everything I could. I may already have the most hardworking… what’s happening now is so much more than we expected at the start of the campaign. We are not expecting that it would no longer just be a simple campaign but a real crusade already and I think that is the biggest blessing.)

READ: With no pol backers, volunteers mobilize in Robredo sortie in hostile territory

According to Robredo, there were times when she and her team were so tired but the crowd’s energy pushed them to continue working despite the odds.

(So, we’re still so energized. Tiring but when you’re already with the people, it seems like the people’s energy is transferred to us so, despite the lack of sleep, and tiredness, we’re always looking forward to the next events. It’s quite saddening that it would end tomorrow because it’s been really a fun campaign.)

(We’ll do everything, leaving no stones unturned. We will not do the dirty tricks being done by others, that’s the most important thing.  God will do the rest after this.)

Robredo earlier returned to Sorsogon City where she received a rockstar welcome from more than 40,000 supporters along Magsayasay Street.  Sorsogon was their team’s first stop for her miting de avance on Friday, before moving to Legazpi, Albay, for another Grand Rally later on the same day.

Robredo’s penultimate campaign sortie would end at her hometown Naga City, where a huge crowd is expected to fill up Magsaysay Avenue. As early as Thursday night, people have been flocking along the road to check the preparations for the program in Naga.

It's still a day before VP Leni Robredo's miting de avance in Naga City but thousands of people are visiting Magsaysay Avenue to check on the preparations.#OurVoteOurFuture #VotePH@inquirerdotnet pic.twitter.com/tvujZW8Y4h

Naga is the hometown of Robredo and her late husband Jesse Robredo, who used to be the city's mayor.#OurVoteOurFuture #VotePH@inquirerdotnet pic.twitter.com/GaDObG7lOO

At that time, Robredo was running against four other candidates with roots from the Bicol Region – Escudero who hails from Sorsogon where he largely won; former senator Antonio Trillanes IV who is part of Robredo’s Senate slate now; and former senator Gringo Honasan.

Robredo would need similar or more support from the Bicol Region again in the upcoming polls to overcome the perceived edge of her archrival, Ferdinand Marcos Jr., whom she beat in the 2016 presidential race.