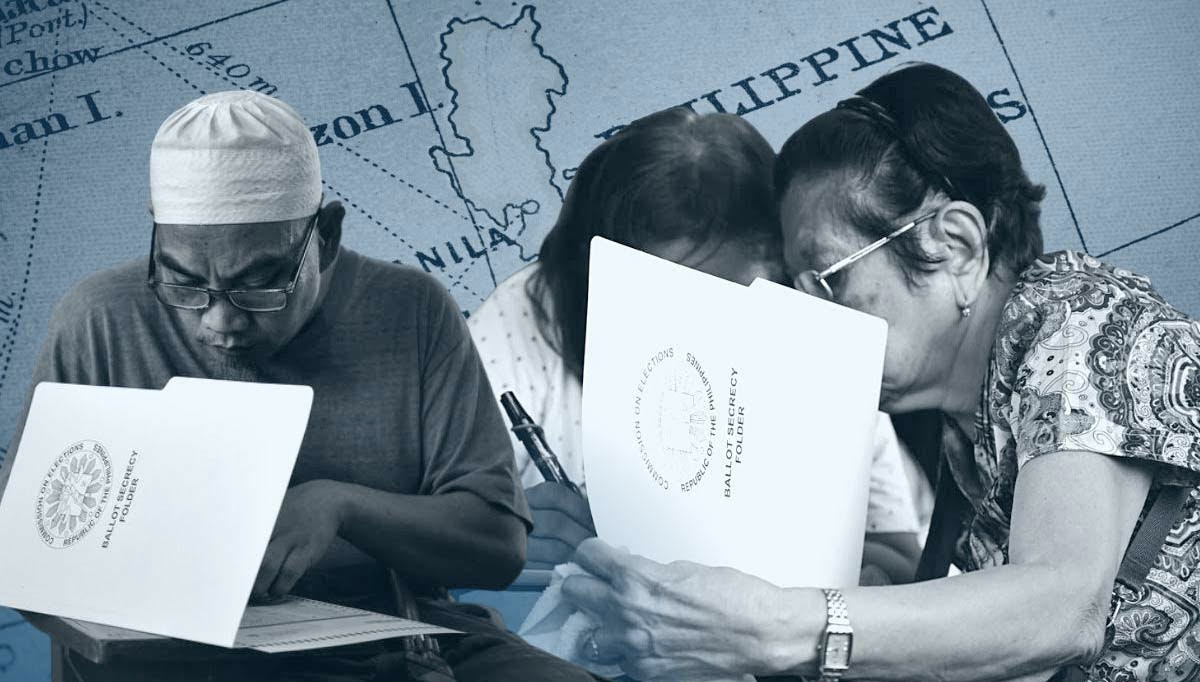 MANILA, Philippines—Exactly three days until Election Day, the call for vigilance was loud enough as Filipinos, led by the group Kontra Daya, vowed not to let the credibility of the election process get undermined.

“We will reject any attempt to subvert the people’s choice and hold accountable all those who conspire to steal our hope for a better Philippines,” members of the group said as they raised white ribbons outside the Manila Cathedral in Intramuros, Manila on Friday (May 6).

Kontra Daya, which was established in 2007 because of the need to keep a watchful eye on election cheating, was with Church leaders to call for “clean and honest” elections and ask Filipinos to be vigilant against all kinds of election-related lies and violence.

“We are here to let them know that we are ready, we are vigilant. If we need to act, we will, especially now that disinformation and all kinds of ‘election cheating’ are intensifying,” it said.

As they signed Kontra Daya’s “Call for Vigilance”, they said “let the people decide, let truth and fairness prevail”.

University of the Philippines Prof. Danilo Arao, a convenor of Kontra Daya, told INQUIRER.net that since 2007, when the elections were still manual, cheating was already widespread.

“The abuses of the powerful are really evident because vote-buying is widespread. Likewise, disinformation is really intensifying, not only through historical denialism—through red-tagging as well,” he said.

Since Kontra Daya was established, the first election year since the “Hello, Garci” scandal broke out, Arao said some of the most prevalent ways of election cheating are vote-buying, harassment and intimidation, and misuse of government resources.

“What’s different now is the disinformation. It already reached the point of historical denialism. Well-established facts are being dismissed through alternative facts,” he said.

For Arao, who said that disinformation intensified this year, “this is not acceptable because it prevents people from making the right decision on who to vote for”.

Tricking the way to victory

INQUIRER.net lists down the most prevalent ways of election cheating in the Philippines, as discussed by Arao, former Supreme Court Senior Associate Justice Antonio Carpio and the Administration and Cost of Elections Project (ACE).

The group Transparency International (TI) said that vote-buying is “one of the symptoms of a systemic lack of political integrity that weakens the trust that people have in their elected representatives and limits their ability to speak freely and safely against corruption”.

Vote-buying, the Omnibus Election Code (OEC) stated, is the act of “giving, offering or promising” anything of value to make him or her vote “for or against any candidate or withhold his or her vote in the election”.

Arao said that in elections—manual or automated—vote-buying is the most prevalent way of cheating. “The rich and the powerful will always do everything it takes to stay in power,” he said.

As revealed by TI’s Global Corruption Barometer—Asia, incidents of vote-buying were highest in Thailand and the Philippines, where 28 percent of voters were offered a bribe in exchange for their vote; Indonesia (26 percent); India (18 percent); Maldives (18 percent).

The ACE’s list, which considers the significance of integrity in the election process, said that waylaying could be committed through these: fraud or stealth and intimidation or downright terrorism.

It has the same objective as negative vote-buying except that the voter has no financial gain: “With the connivance of the Board of Election Inspectors, the voter’s name is deleted from the list.”

This then results in confusion and the disenfranchisement of the voter.

The OEC stressed that threats, intimidation, terrorism and coercion is the act of directly or indirectly threatening, intimidating or inflicting violence, damage, loss or disadvantage to any person, the immediate members of his family, his honor or property to prevent him or her from these:

ACE said that one of the most prevalent ways of cheating in the elections, especially when it was not yet automated, is filling-up of ballots by only one person.

“The legitimate voters are driven away and the henchmen of the warlord are left to do the voting for them,” it said.

There are likewise instances where the voting is done by persons other than the registered voters themselves.

Toward the end, the list is scanned for those who have not voted yet. Ballots are issued to persons other than the registered voters and are filled up by the co-conspirators of the cheating candidate.

“As expected, it is his name that will appear in the appropriate place,” the ACE said.

Like what Arao said, disinformation is what’s different in this year’s election—fake news is disseminated to mislead voters.

Kontra Daya said in 2018 that the prevalence of disinformation, especially online, is serious enough that it may be considered as a form of election fraud.

“The lies, misinformation and disinformation resulting from the activities of online trolls cannot be denied […] Any attempt to deceive the electorate should be exposed and those responsible for it should be made accountable,” it said.

For instance, Tsek. PH, a fact-checking initiative, revealed on Feb. 25 that out of the fake or misleading content about Vice President Leni Robredo online, 94 percent were negative while all of the content about her running mate Sen. Kiko Pangilinan were entirely negative.

Likewise, he said disinformation was even intensified through red-tagging: “This is serious because the one being tagged, even the people backing him or her, will be at greater risk of danger.”

Last year, the automated election system (AES), Carpio said, is still prone to vulnerabilities—pilfering of ballots and tampering of cards.

“The ballots, as well as the flash cards containing the AES operating system, are manually delivered over several days by one logistics company. The delivery starts from the Comelec warehouses in Metro Manila and ends at some 100,000 precincts all over the country,” he wrote in his INQUIRER column.

The first vulnerability, he said, is that unscrupulous persons can pilfer a percentage of the ballots and ask their chosen voters to insert the pilfered ballots, already shaded, into the voting machine when they vote.

This type of cheating, although difficult to carry out because the ballots are precinct-specific and cannot just be inserted into any voting machine, may still be resorted to by desperate parties.

This concern was likewise raised last year, when the Commission on Elections (Comelec) signed a contract with a logistics company owned by a businessman known to be close to President Rodrigo Duterte.

Since the Comelec awarded the contract to the company last August, concerns were raised because of possible conflict of interest in entrusting the transportation of election equipment and supplies to a company run by someone close to Duterte.

The second risk is that unscrupulous persons may tamper with the flash cards so that these cards, which are precinct-specific just like the ballots, will print out predetermined results in the election returns.

However, hacking, which is the act of receiving information from the machine, altering it, then sending different results to the receiver could still happen.