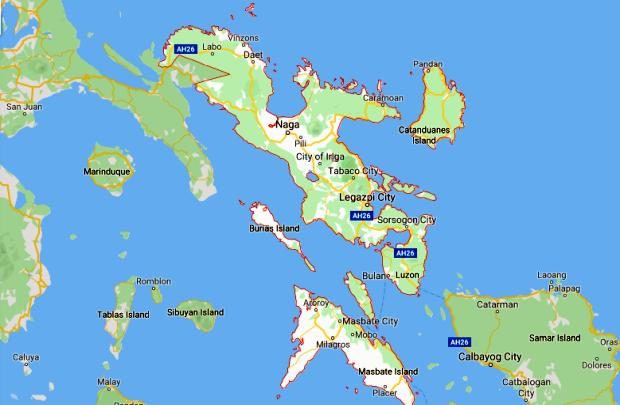 The Bicol Region, outlined in red (Image from Google Maps)

NAGA CITY, Camarines Sur, Philippines — Vice President has promised to ensure that the Bicol Region, which she said has been left behind by many administrations, would see progress should she be elected president.

She was speaking before residents of Tigaon in Camarines Sur on Tuesday, Feb. 8 — the first official campaign day.

Robredo said that, if elected president, would not forget her region, as she was born in Naga.

“This election is an opportunity for us Bicolanos. For a long time, it seems the Bicol Region has been forgotten, right? We always say: Why do they always forget us?” Robredo said in Filipino. “If it happens that I get a chance to serve, it will be the first time that there will be a Bicolana president. With a Bicolana president, it seems impossible that Bicol will be forgotten.”

But in earlier speeches, in Tagao and nearby Iriga, Robredo told voters to elect her not because of she was from Bicol but because they believed the country would need her platform.

“There’s a deeper and more important reason [to elect me] besides being a Bicolano. And the deeper reason is this: This is our chance to change the course of politics in our country,” she said.

“This is the kind of politics that we believe has been the same reason that up to now, even if we change who we vote for, our situation in life remains the same,” she added.

Robredo also appeared to take shots against her opponents, although she did not name anyone among the presidential candidates.

“When they say they are industrious workers, let’s see that when given the chance if they were really industrious. We don‘t want to be wrong in this election. We should pick those who will honestly govern us. I always say this: If the leader is honest, everyone’s life will improve,” she added.

Robredo kicked off her campaign in Camarines Sur, touring Lupi and Libmanan towns before Tigaon and then Iriga.

She culminated her day with a proclamation rally in Naga City, which drew huge crowds at the Plaza Quezon.

VP Robredo to kick off campaign for presidency in Camarines Sur on Tuesday, Feb. 8