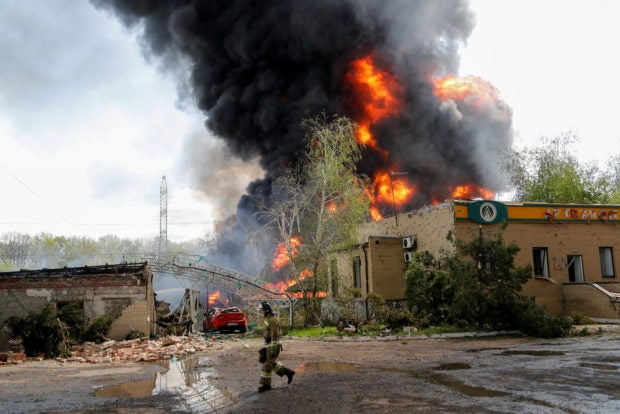 Smoke rises above a burning oil storage in the course of Ukraine-Russia conflict on the outskirts of Donetsk, Ukraine May 4, 2022. REUTERS/Alexander Ermochenko

ZAPORIZHZHIA, Ukraine — Russia’s invasion of Ukraine has devastated hundreds of hospitals and other medical institutions and left doctors without drugs to tackle cancer or the ability to perform surgery, President Volodymyr Zelenskiy said.

Zelenskiy said many places lacked even basic antibiotics in eastern and southern Ukraine, the main battlefields.

“If you consider just medical infrastructure, as of today Russian troops have destroyed or damaged nearly 400 healthcare institutions: hospitals, maternity wards, outpatient clinics,” Zelenskiy said in a video address to a medical charity group on Thursday.

In areas occupied by Russian forces the situation was catastrophic, he said.

“This amounts to a complete lack of medication for cancer patients. It means extreme difficulties or a complete lack of insulin for diabetes. It is impossible to carry out surgery. It even means, quite simply, a lack of antibiotics.”

In one of the most widely denounced acts of the war, a maternity hospital was all but destroyed on March 9 in the besieged port city of Mariupol. Russia alleged pictures of the attack were staged and said the site had been used by armed Ukrainian groups.

The Kremlin says it targets only military or strategic sites and does not target civilians. Ukraine daily reports civilian casualties from Russian shelling and fighting, and accuses Russia of war crimes. Russia denies the allegations.

Pavlo Kyrylenko, governor of Donetsk region, said 25 people had been injured in intense shelling in the town of Kramatorsk, site of a railway station bombing last month in which more than 50 died. He said a total of 32 residential buildings had been damaged in the shelling.

Reuters could not immediately verify battlefield reports by Russia and Ukraine.

Russia calls its actions in Ukraine a “special operation” to disarm Ukraine and protect it from fascists. Ukraine and the West say the fascist allegation is baseless and that the war is an unprovoked act of aggression. More than 5 million Ukrainians have fled abroad since the start of the invasion.

Russia has turned its heaviest firepower on Ukraine’s east and south, after failing to take the capital Kyiv. The new front is aimed at limiting Ukraine’s access to the Black Sea, vital for its grain and metal exports, and linking Russian-controlled territory in the east to Crimea, seized by Moscow in 2014.

In the port city of Mariupol an estimated 200 civilians, along with Ukrainian resistance fighters, are trapped undergound in the Azovstal steel plant with little food or water.

The steel works was rocked by heavy explosions on Thursday as Russian forces fought for control of Ukraine’s last stronghold and the United Nations rushed to evacuate civilians.

President Vladimir Putin said Russia was prepared to provide safe passage for the civilians but reiterated calls for Ukrainian forces inside to disarm.

Putin declared victory over Mariupol on April 21 and ordered his forces to seal off the Soviet-era plant but not venture inside its underground tunnel network.

Ukraine’s stubborn defence of Azovstal has underlined Russia’s failure to take major cities in a 10-week-old war that has united Western powers in arming Kyiv and punishing Moscow with sanctions.

A Ukrainian fighter who said he was holed up in Azovstal accused Russian forces of breaching the plant’s defences for a third day despite an earlier pledge by Moscow to pause military activity to permit civilian evacuations.

“Heavy, bloody fighting is going on,” said Captain Sviatoslav Palamar of Ukraine’s Azov Regiment. “Yet again, the Russians have not kept the promise of a ceasefire.” Reuters could not independently verify his account or location.

Reuters verified the footage location by matching buildings with satellite imagery, but was unable to determine when the video was filmed.

Russia’s military promised to pause its activity for the next two days to allow civilians to leave. The Kremlin said humanitarian corridors from the plant were in place.

Ukrainian Deputy Prime Minister Iryna Vereshchuk said on Thursday that people would be evacuated from Mariupol on Friday at 1200 local time.

Sweeping sanctions from Washington and European allies have hobbled Russia’s $1.8 trillion economy, while billions of dollars worth of military aid has helped Ukraine frustrate the invasion.

The Kremlin said Russia was weighing responses to the EU plan.

Ukrainian officials have warned that Russia might step up its offensive before May 9, when Moscow commemorates the Soviet Union’s victory over Nazi Germany in World War Two.