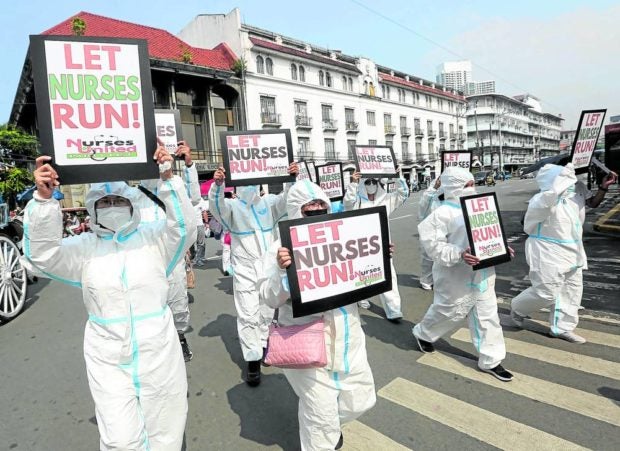 FILE PHOTO: Members of the Nurses United party list gathered at the Comelec office in Manila on Monday, November 22, 2021, to call on the poll body to approve their party list, which will represent nurses and health workers. (File photo by MARIANNE BERMUDEZ / Philippine Daily Inquirer)

MANILA, Philippines — President Rodrigo Duterte on Monday criticized the exploitation of the country’s party-list system, saying the rich use it to lobby for their interests in Congress.

He said the party-list system should have been a “mechanism” to give the underrepresented sectors of society a voice in Congress, but that it has been abused by the wealthy.

(All of the rich, the millionaires, have party lists. They are fighting over it. Those who don’t have any buy some.)

“What was conceived to be a mechanism to give the lowly Filipino a voice to be heard… wala eh, except the communists,” Duterte added.

(When the time comes, amend the Constitution. The problem is if there will be someone against it, it won’t pass Congress. It becomes unpopular. But to tell you the truth, we need to change it. It’s up to you. We’re just talking as Filipinos. I am not siding with anybody.)

“If perchance there would be an opportunity for this country to have a ConAss or ConCon, itong Constitution na ito, madali maging bilyonaryo in public office kung ginusto niya,” he added.

(It is easy to become a billionaire in public office if he wanted.)

Earlier, the President slammed some party-list groups which he claimed are linked to the communist movement.