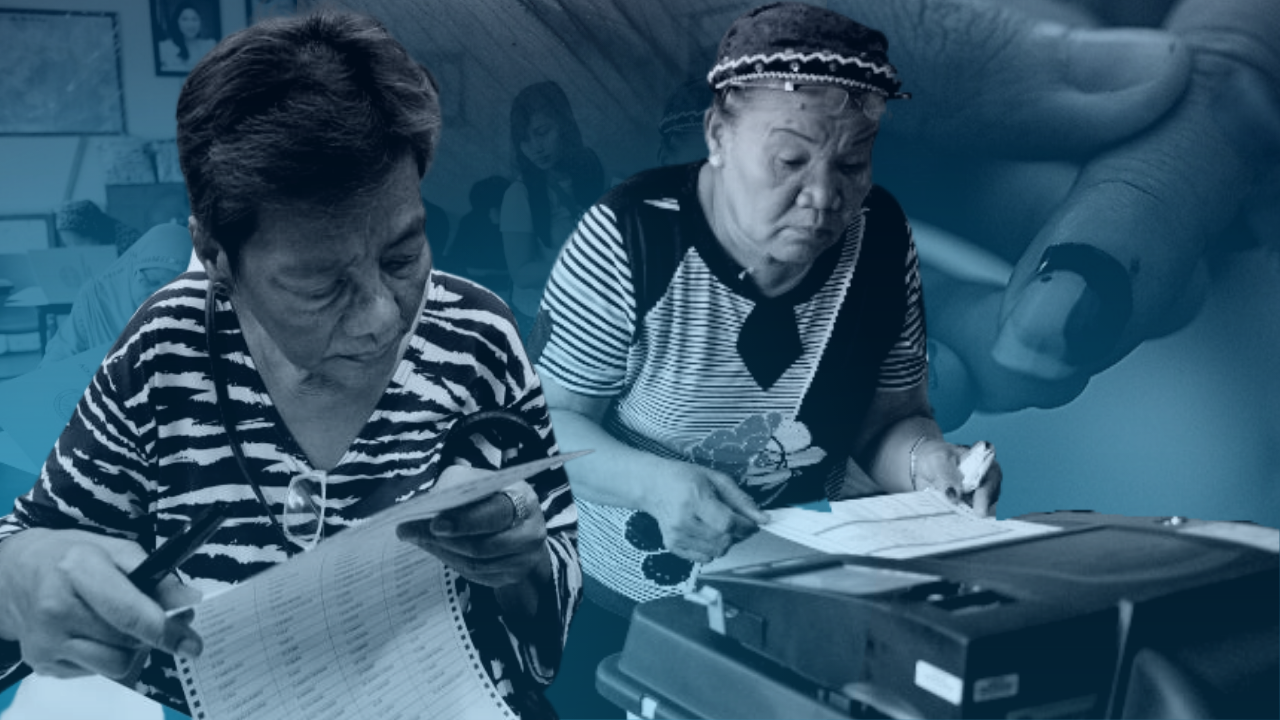 MANILA, Philippines—On March 3, 1995, a law was enacted—Republic Act No. 7941—giving flesh to the constitutional provision that set aside 20 percent of seats in the House of Representatives for marginalized sectors through party-list representation.

Some 27 years later, the party-list system would boom and play roles beyond representing the interests of the poor, unserved sectors in the Philippines.

This shift to a role far bigger than just being a voice for the underrepresented in Congress is now more pronounced than it was when the Constitution came into place in 1987 and the law governing the party-list system came into force in 1995.

Since the start of the 90-day campaign period on Feb. 8, several party-list groups had already inserted themselves into national politics, especially the race for President Rodrigo Duterte’s successor.

The incoming 19th Congress will have 316 representatives––63 for party-list and 253 for legislative districts––in compliance with the constitutional mandate of “proportional representation.”

While the Party-List System Act (RA No. 7941) enables Filipinos in marginalized sectors—farmers, laborers, public transport workers and others—to have a voice in Congress and contribute to legislation, some party-list groups also chose to play roles that could make or break a presidential candidacy or their own chances.

Gerardo Eusebio, a political science professor of De La Salle University, told INQUIRER.net that party-list endorsements, like any, “are always helpful for a presidential candidate.”

Maria Ela Atienza, a political science professor of the University of the Philippines Diliman, said party-list endorsements can really help, especially when the endorser has immense “clout and reach.” 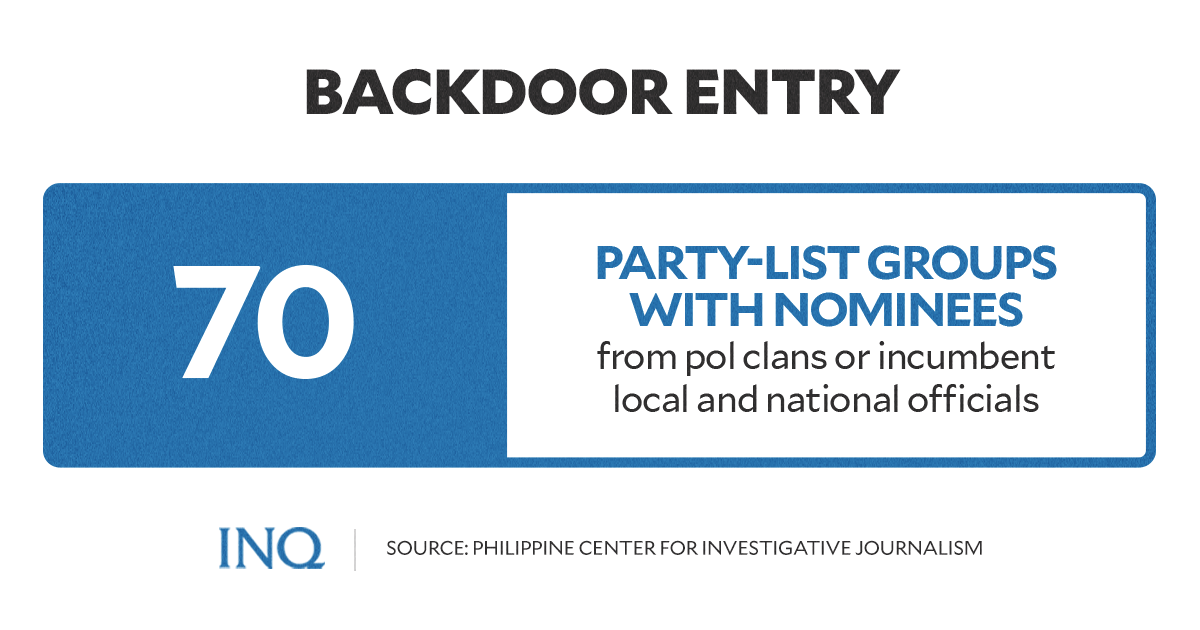 “If a party-list coalition has proven in the past that it can get sizable votes, then this can help in a field of too many presidential candidates in a first-past-the-post system,” she told INQUIRER.net.

In the 2022 elections, 178 party-list groups made it to the final list of the Commission on Elections, down from 270 which filed certificates of candidacy.

As election day draws near, INQUIRER.net tries to take a closer look at what appears to be a symbiotic relationship between party-list groups and national candidates, especially those running for president, that these groups are publicly supporting.

It showed that out of 178 party-list groups, at least 47 are already rallying behind their choice presidential candidates, especially former Ferdinand Marcos Jr. and Vice President Leni Robredo.

These groups had made their support public either by issuing statements of endorsement or attending campaign rallies and other activities.

Out of the 47 party-list groups that had publicly supported presidential candidates, 21 were for Marcos Jr., 18 were for Robredo and one each for labor leader Leody de Guzman and Isko Moreno.

One of the 21 party-list groups that are backing Marcos Jr. is the 4Ps, or the Progresibong Pagtutulungan sa Pag-unlad ng Pilipinas. One of its nominees, former Eastern Samar Rep. Marcelino Libanan, is a vocal supporter of UniTeam, the name given to the Marcos-Sara Duterte tandem. 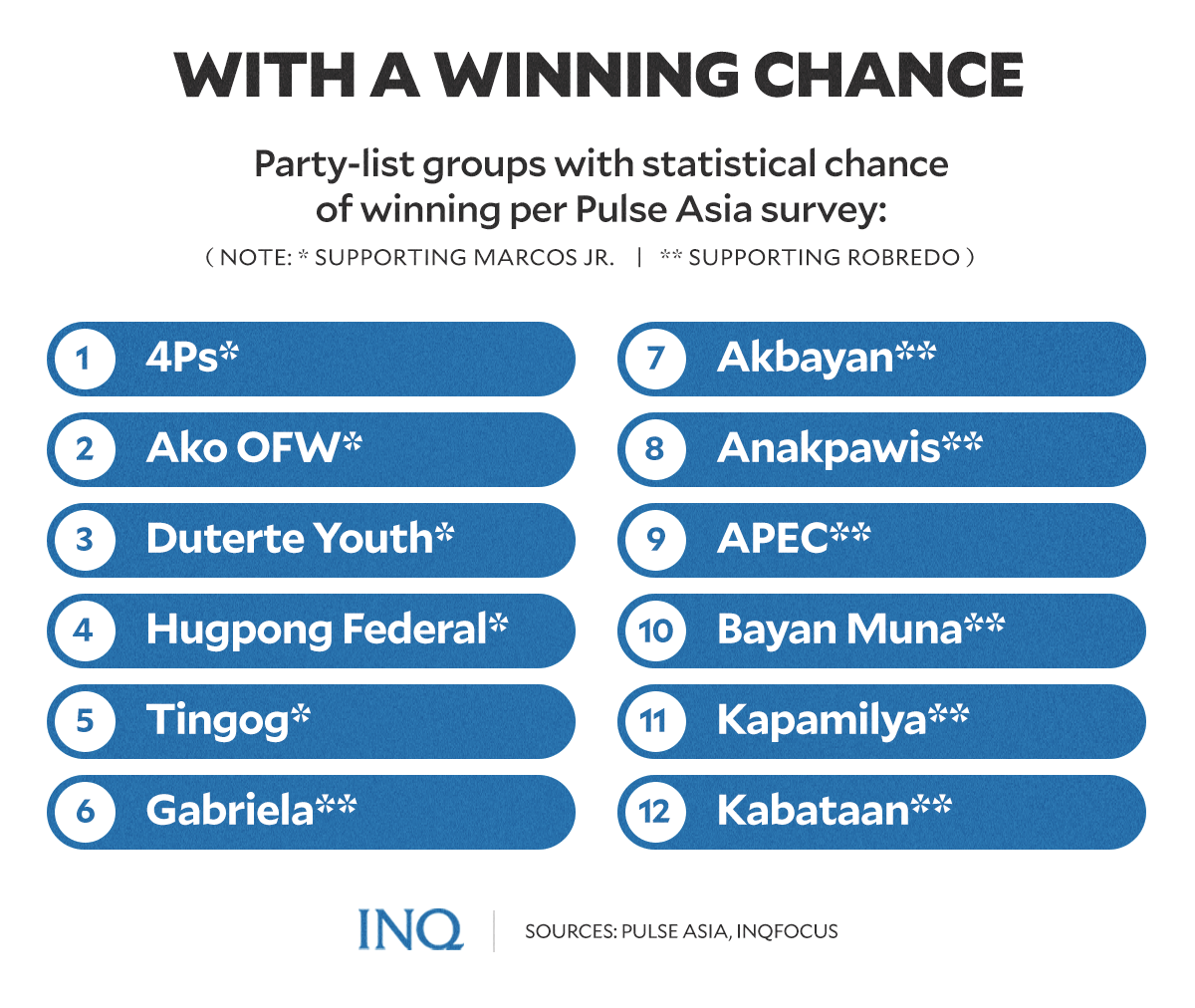 Another party-list group, Agimat, is also supporting Marcos Jr. One of its nominees is Bryan Revilla, son of Sen. Bong Revilla. Agimat, named after one of the movies of the late Ramon Revilla Sr., “promotes patriotism and democracy.” Marcos Jr. was one of the prominent guests at a reception hosted by the Revillas in Cavite province.

The group Ako Ilocano Ako is also supporting Marcos Jr. One of its nominees is Richelle Singson, daughter of Chavit Singson, now mayor of Narvacan, Ilocos Sur and an avid supporter of Marcos Jr.

Duterte Youth said on Facebook that it was the “loyal defender” of Marcos Jr. and Sara, President Duterte’s daughter and mayor of the Duterte bailiwick Davao City.

Another party-list group supporting Marcos Jr. is Tingog Sinirangan, based in Eastern Visayas, the region known as an Imelda Marcos bailiwick. 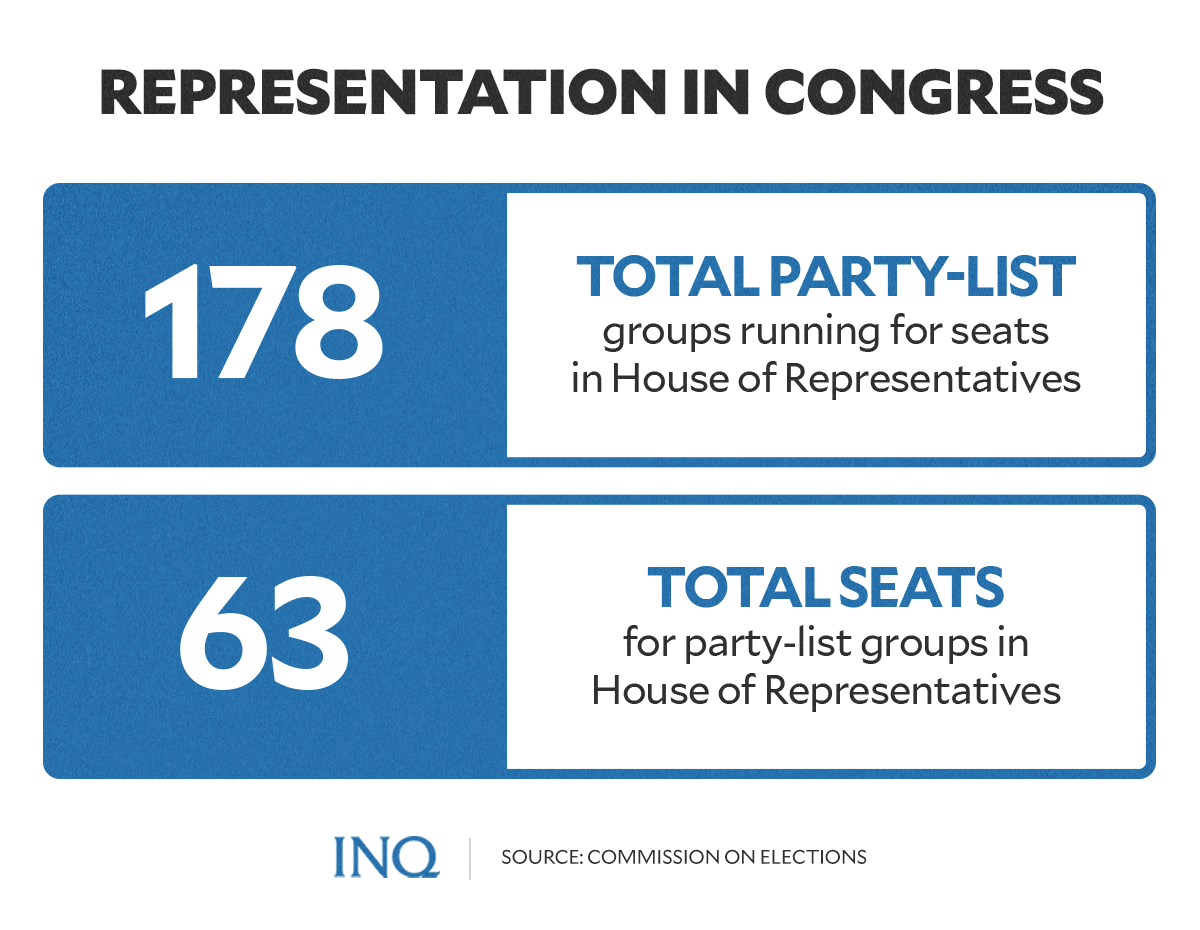 TUCP, which said it has the strength of 480,000 rank-and-file workers, is also supporting Marcos Jr., pointing to polling results showing the son of the late dictator Ferdinand Marcos having a wide margin of advantage over other candidates like Robredo, Moreno, De Guzman, Panfilo Lacson and Manny Pacquiao.

Some party-list groups are also rallying behind Robredo, like representatives of the Makabayan coalition in the House, Magdalo, Akbayan, AGRI and Kontra Brownout.

On Jan. 28, Makabayan publicly endorsed Robredo, saying that it will commit its strength to deliver a win for her and vice presidential candidate Sen. Francis Pangilinan.

The group Center for People Empowerment in Governance (Cenpeg) said Makabayan’s backing of Robredo and Pangilinan “introduces a new dimension of campaign dynamics.”

It said Makabayan has a “hardcore electoral base” of three million votes as shown by its average electoral base in the House of Representatives in past elections––2010, 2013, 2016 and 2019. 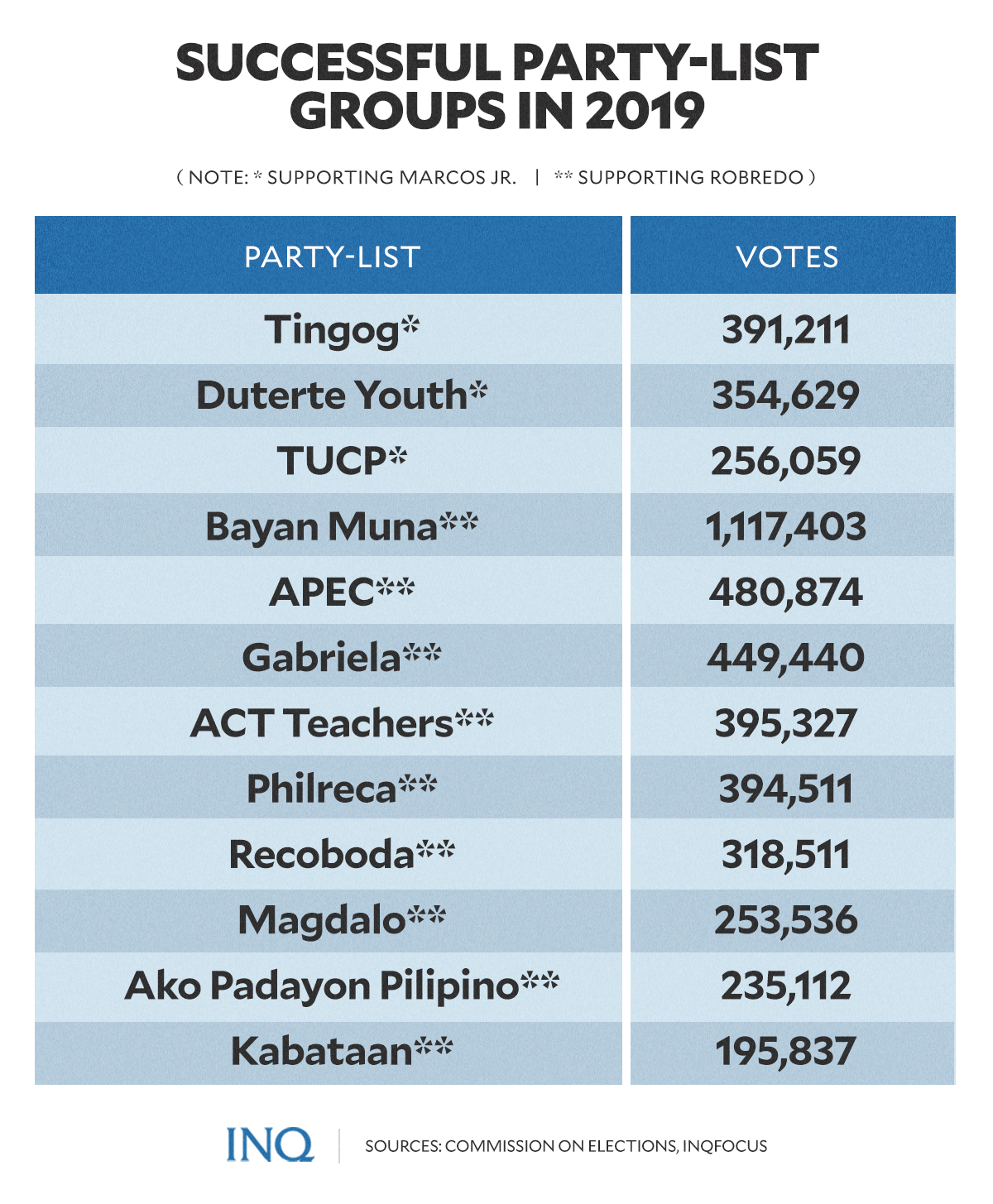 “A more expansive electoral base for Makabayan reaches close to six million votes average nationwide if the results for Senate elections for Makabayan bets are considered, also since the 2010 elections,” Cenpeg said.

Magdalo, which former senator Antonio Trillanes and other then rebel soldiers founded, said it is the “voice for the oppressed.” It had 253,536 votes. Last year, Trillanes, who is campaigning to return to the Senate, had warned Robredo of losing Magdalo’s support if she gave way to Lacson.

Why the need to endorse?

Atienza said ideally, especially for progressive party-list groups, the decision on who to endorse should be based on who aligns closely with their principles and programs and who can advance what they are fighting for.

READ: Endorsements: ‘Tell me who your friends are…’ This was exactly what the Power Bloc said it considered when it endorsed Robredo, saying that she had signed a covenant with the group not to privatize electric cooperatives.

Makabayan had said it was united with Robredo and Pangilinan on COVID response, rights of workers, farmers, the poor, indigenous people, environment, people’s rights and the West Philippine Sea.

Akbayan said last year that out of all the presidential candidates, it saw Robredo as the only one who would be firm in the fight to protect democracy and people’s rights. The group said “her credibility as a leader leaves no doubt.”

Last Feb. 8, De Guzman said workers like him are his inspiration in running for president. “They are the reason why I keep fighting,” he said. PLM, the party-list group which supports him, had 28,824 votes in 2019.

TUCP told ANC on March 10 that it had been in talks with Marcos Jr. and Sara for commitment to the group’s “labor agenda.”

While party-list groups should be ideally pushing for their sector’s agenda, Atienza said there are groups composed of traditional politicians and people who have links with President Duterte and make decisions “based on personal ties and who can protect their interests.”

The Philippine Center for Investigative Journalism said on Feb. 23 that 70 party-list groups have nominees who are connected to political clans, incumbent local or national elected officials.

Eusebio said party-list groups should carefully weigh the pros and cons of endorsements, given different scenarios at hand. He said they should woo candidates who are politically strong and are worthy enough to “piggyback” on.

“Piggybacking is a good pragmatic strategy that party-list groups should employ,” he said.

Those that will possibly win two seats are An Waray, Uswag Ilonggo, Gabriela, and Agap.

There are seven party-list groups for Robredo that could win at least one seat––Gabriela, Akbayan, Anakpawis, APEC, Bayan Muna, Kapamilya and Kabataan.

Atienza, however, said endorsing presidential candidates does not automatically translate into votes for the endorser.

For Eusebio, “permanence and loyalties in these party-list coalitions have never been pronounced and are just tentative alliances.”

“Attachment with names have not solely carried party-list coalitions but what matters are political maneuvers in actual configurations and the patronage employments that goes with it,” he said.

As INQUIRER.net closely looked at the Facebook pages of the party-list groups, those that were expected to endorse presidential candidates have not yet done so whether directly or implied.

Atienza said it happens because political parties, even many party-list groups, are weak and decisions to seek a national elective post “are not done democratically, like with active participation of members.”

“The case is different with sectoral and progressive party-lists where members deliberate on their nominees as well as national candidates they will support,” she said.

Interestingly, there are party-list coalitions that have already expressly endorsed Sara but not Marcos Jr. Among these were Ipatupad, Pasahero, Pusong Pinoy and Act As One.

PDP Cares, which has Kathrina Yu-Pimentel, wife of Sen. Koko Pimentel, as first nominee, has not yet endorsed Pacquiao even if he is the chair of the PDP-Laban (Pacquiao wing).

RELATED STORY: Robredo open to past rivals’ endorsement but it should be ‘no strings attached’