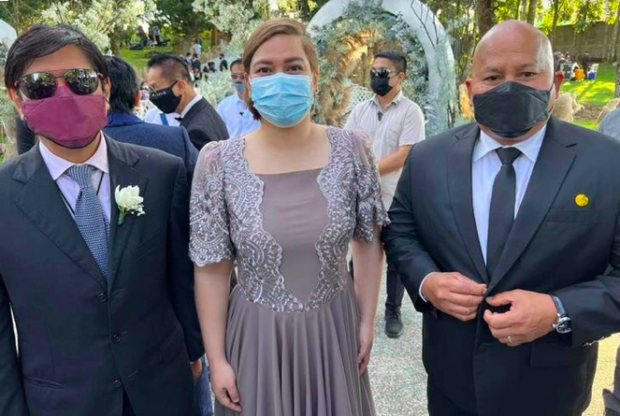 Senator Ronald “Bato” Dela Rosa had this to say Thursday as he, former senator Ferdinand “Bongbong” Marcos Jr., and Davao City Mayor Inday Sara Duterte-Carpio pose for a photo while attending a wedding in Cavite on Thursday afternoon.

The three posed for a photo as talks of possible tandems and alliances forming surface ahead of the national elections.

Dela Rosa, Marcos Jr., and Duterte-Carpio were attending the wedding of the daughter of Senator Ramon Revilla Jr.

The topic about presidential elections once again made headlines after Duterte-Carpio, who has consistently led in the presidential surveys, withdrew her reelection bid for Davao City mayor.

This move fueled speculations that she would seek a national post—either the presidency or the vice presidency.

Dela Rosa, who is vying for the presidential post under the ruling PDP-Laban party, has been vocal about his willingness to withdraw his candidacy should Duterte-Carpio push through with her own presidential run.

Another speculation was a possible tandem between Duterte-Carpio and Marcos Jr. although it is not clear who would run for presidency or vice presidency.

The Partido Federal ng Pilipinas (PFP), which nominated Marcos Jr. for presidency, said they are focused on the presidential run of its nominee. The PFP, however, said that a tandem between Marcos Jr. and Duterte-Carpio would be “good.”

Albay Rep. Joey Salceda, another close ally of Duterte-Carpio, has claimed that the Davao City mayor, who just resigned as a member of her regional party Hugpong ng Pagbabago (HNP) may likely run under Lakas-CMD, which is headed by former President Gloria Macapagal-Arroyo.

Social media has been abuzz that Duterte-Carpio and Macapagal-Arroyo will meet this week in Balesin, just days ahead of the November 15 deadline to change candidates for May 2022 elections.

However, Macapagal-Arroyo’s staff has denied this supposed plan for the two prominent politicians to meet.