Some NTF-Elcac funds passed to cities, provinces, as barangays can’t handle it 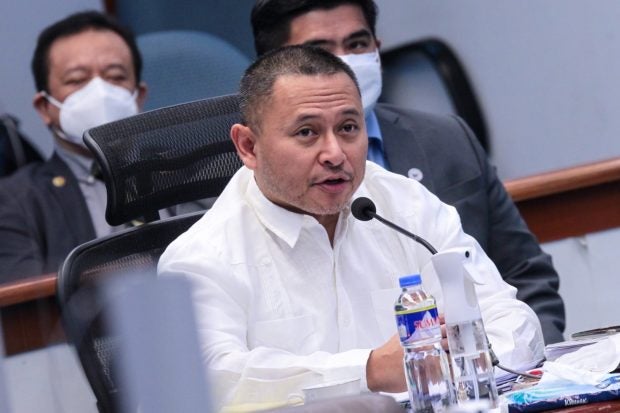 MANILA, Philippines — Several of the funds from the National Task Force to End Local Communist Armed Conflict (NTF-Elcac) appropriated for the barangay development program were passed on to local government units (LGUs) supervising the areas, as barangays cannot accommodate the big projects.

This was revealed during the Senate hearing on the Department of Budget and Management (DBM) proposed budget on Thursday, after Senate President Vicente Sotto III asked if it is true that P400 million of the P460 NTF-Elcac funds allocated to Davao del Norte were given to Panabo City alone.

Senator Sonny Angara, who is defending the DBM budget, said that National Security Adviser and NTF-Elcac member Secretary Hermogenes Esperon said that 23 barangays in Davao del Norte — 20 of which were in Panabo City — got the anti-insurgency projects.

But the barangays can no longer accommodate the huge funds, Angara noted.

“It was given to the 23 barangays because hindi talaga kaya no’ng mga barangay ‘yong gano’ng klaseng amount.  So it’s either the city or the province who points out the projects and implements the projects,” he added.

Sotto’s question also sparked slightly heated discussions between him and Senator Ronald dela Rosa, a staunch defender of the NTF-Elcac and an advocate of its funding.

According to Dela Rosa, he is aware of why most of the funds went to Panabo — because the area is a hotbed of communists.

Sotto retaliated, stressing that his question was not related to whether there was an insurgency in any area, adding that he was only confirming whether what Jubahib told him was true.

“No, no, walang sinasabing — he is not saying to that effect.  He is merely saying na P400 million ang binigay sa Panabo, P60 (million) sa iba because I was verifying the answer.  Walang sinasabing gano’n, anong Davao City, we did not mention Davao City,” Sotto, who appeared to have misheard Tagum for Davao, said.

NTF-Elcac’s budget has been a recent topic in the Senate after it moved to slash the anti-communist insurgency body’s funds for 2022, from the proposed P28 billion to just P4 billion.

Dela Rosa objected to the proposed budget, saying that defunding NTF-Elcac would paralyze the barangay development programs and result in a win for the New People’s Army.

But Sotto noted that they were only concerned that the NTF-Elcac failed to provide a breakdown of their expenditures.

Dela Rosa, for his part, insisted that the NTF-Elcac funds are not being used for political purposes, as getting government funds for the campaign war chest has never been a policy under President Rodrigo Duterte’s administration.

The NTF-Elcac, an office created to usher in development to the countryside to stop the communist influence and insurgency, has been criticized for allegedly having funds which act as pork barrel of government agencies inside it.