Session hall of the House of Representatives

MANILA, Philippines—As the clock ticked on Oct. 8 for the end of the regular filing of certificates for individual and party-list candidates, a new party-list group called Bisaya Gyud beat the deadline.

The group’s platform was “continuity.” In a statement, Victorino Gabay, head of the group, said Bisaya Gyud wants so-called development programs being implemented by President Rodrigo Duterte and his closest confidant Sen. Bong Go to go on.

The group said it was joining the party-list race to uphold the rights and welfare of the Bisaya, through food, shelter and education.

But it was openly pro-Duterte and pro-Go. Go is a candidate for vice president of a faction of the ruling PDP-Laban led by Energy Secretary Alfonso Cusi.

“In line with the initiatives launched by President Duterte and Senator Bong Go in the regions, we will bring our Visayan compatriots closer to the government’s economic services that address the issue of food, housing and education,” Garay said in the statement. 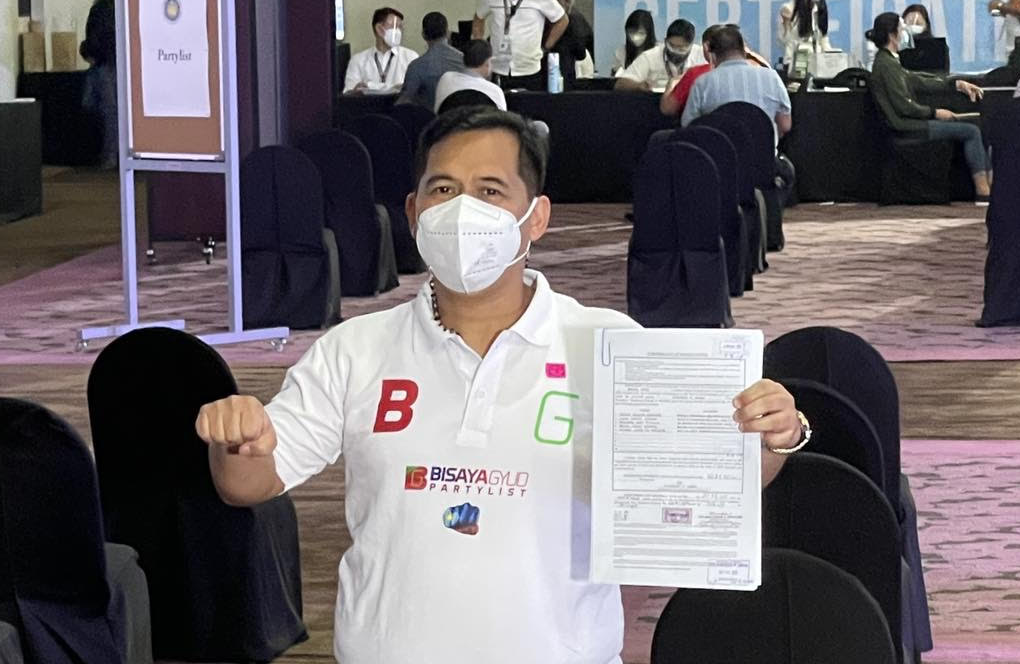 Garay claimed that lack of opportunity in the Visayas and Mindanao is driving the Bisaya people to look for greener pastures abroad or in highly urbanized areas in the Philippines where they end up falling prey to traffickers or sink deeper in poverty.

“We have witnessed the reality that our Visayan compatriots are trying their luck to look for economic opportunities either in Manila or abroad due to the lack of livelihood, education and labor in the countryside,” said Garay.

“We hope that our Visayan brothers and sisters will take part in the aspiration of equitable development in our country and the growth of culture, wealth and capacity of the Visayas,” he said.

It was something Senate President Vicente Sotto III appeared to agree with when he said Duterte “wants this problem with the Communist Party of the Philippines—New People’s Army solved.” A constituent assembly would be the right body to pave the way for amendments to the Constitution, he said.

But nine months after Duterte made the statement, no constituent assembly was formed. Last Oct. 1, the Commission on Elections (Comelec) already opened the filing of certificate of candidacy (COC) for individuals and certificate of nomination and acceptance (CONA) for party-list groups.

As of Thursday (Oct. 7), eve of the deadline to file COC and CONA, 194 party-list groups had already filed CONA. These included 43 of 51 party-list groups that already have seats in the House of Representatives.

Bayan Muna Rep. Carlos Zarate said it was “gravely” concerning that the party-list system has been “hijacked and bastardized by the proliferation of dynastic and bogus party-list groups, some even indirectly fielded or associated with the National Task Force to End Local Communist Armed Conflict (NTF-Elcac).”

On Oct. 7, another party-list group, Abante Sambayanan, filed a CONA supposedly to represent former rebels. Its nominee, Jeffrey Celiz, had been involved in red-tagging and condemned by leftist groups.

“They are using the party-list system as a backdoor entry or getting back into power,” said Zarate.

These instances, he said, were the reasons Bayan Muna filed House Bill No. 242, or the proposed Genuine Party-list Group and Nominee Act.

As the bill’s title suggests, its main purpose was to address the violation of the constitutional and statutory intent of the party-list system by amending the law that created it—Republic Act No. 7941.

In the last seven days, while the party-list nominees who stood inside the CONA venue—Harbor Garden Tent of the Sofitel Philippine Plaza in Manila—appeared to represent diversity, no rebel filed a CONA, contrary to what Duterte had predicted in January 2021.

Instead, there were party-list groups with nominees related to individuals currently in government or seeking to be in government through the 2022 elections. Like what Comelec Commissioner Rowena Guanzon said, individuals belonging to political dynasties have found a door leading to the House of Representatives in the party-list system.

“Political dynasties really thrive not only by vying for regular seats, but also in the party-list system,” she told CNN Philippines in 2019, saying that there should be a law that will “reform this and at least prohibit the nominees who are related to a sitting, elected official.”

While the Comelec will still assess the CONA of the party-list groups before releasing the official list of those that will take part in the 2022 elections, an initial look at the nominees showed individuals belonging to political clans:

Last Friday (Oct. 1), the first to file CONA were the nominees of AGAP Partylist. In seven days, 194 party lists vying for a seat in the House of Representatives, were able to file CONA—representing workers, peasants, women, youth, drivers, enterprises.

Section 5 (1) of the 1987 Constitution states that a party list should be a “registered national, regional, and sectoral groups from the labor, peasant, urban poor, indigenous cultural communities, women, youth, and such other sectors as may be provided by law, except the religious sector.”

Republic Act 7941, also known as the Party-List System Act, said the state shall promote proportional representation in the election of representatives through registered national, regional and sectoral parties or organizations or coalitions.

It said the representations will “enable Filipino citizens belonging to the marginalized and underrepresented sectors, organizations and parties, and who lack well-defined political constituencies but who could contribute to the formulation and enactment of appropriate legislation that will benefit the nation as a whole,” to become part of Congress.

In 2013, however, the Supreme Court decided to uphold the intent of the 1987 Constitution that party lists are not only for the “marginalized and underrepresented” sectors, saying that is a system of proportional representation. 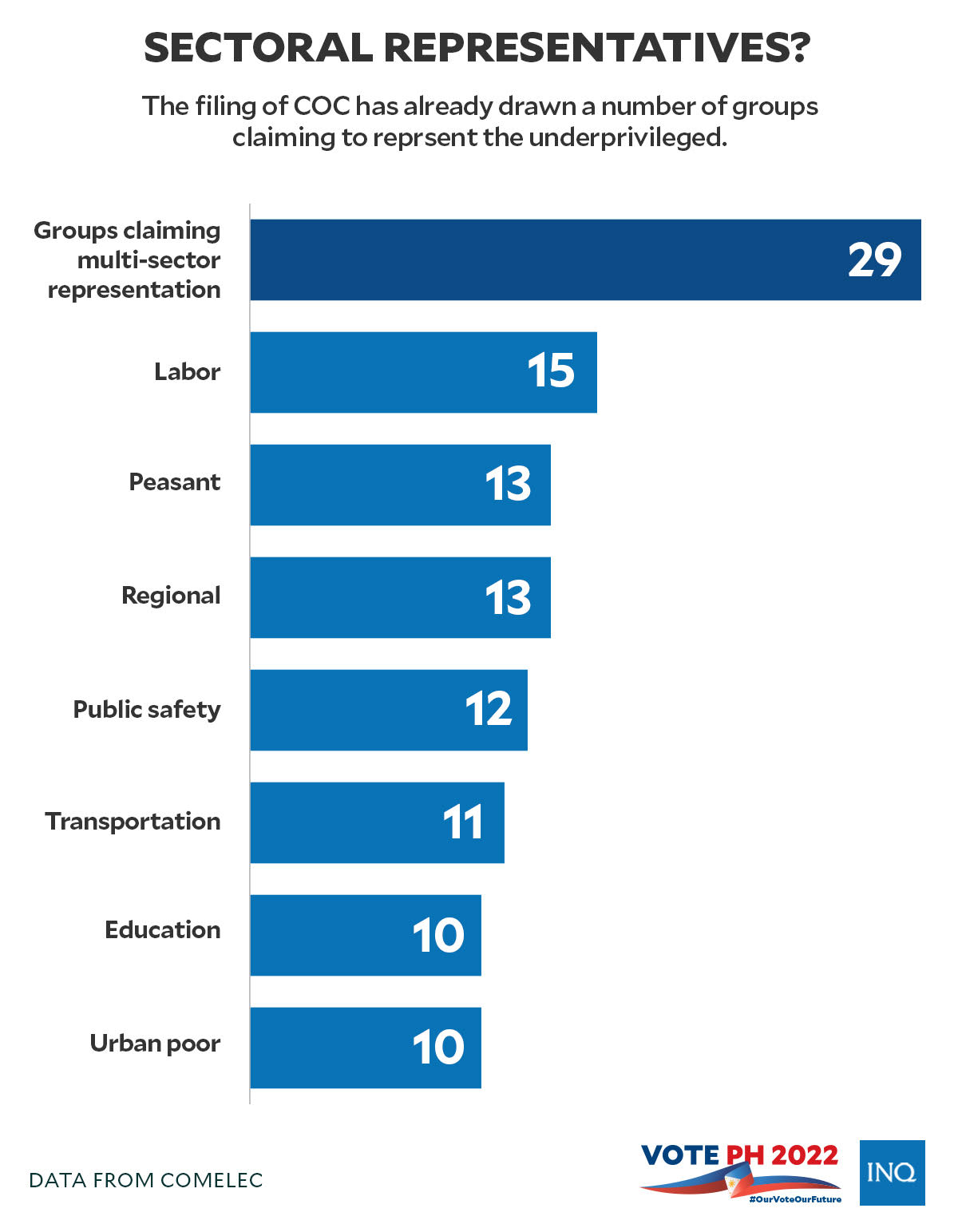 The Comelec did not yet release an official list of party lists and the sectors they represent. However, an initial look showed that as of Thursday (Oct. 7), groups had already filed CONA to represent these sectors:

As the last day of filing ended, only five party lists among those that filed CONA said they represent indigenous cultural communities. Three represent women and children and one represents youth. 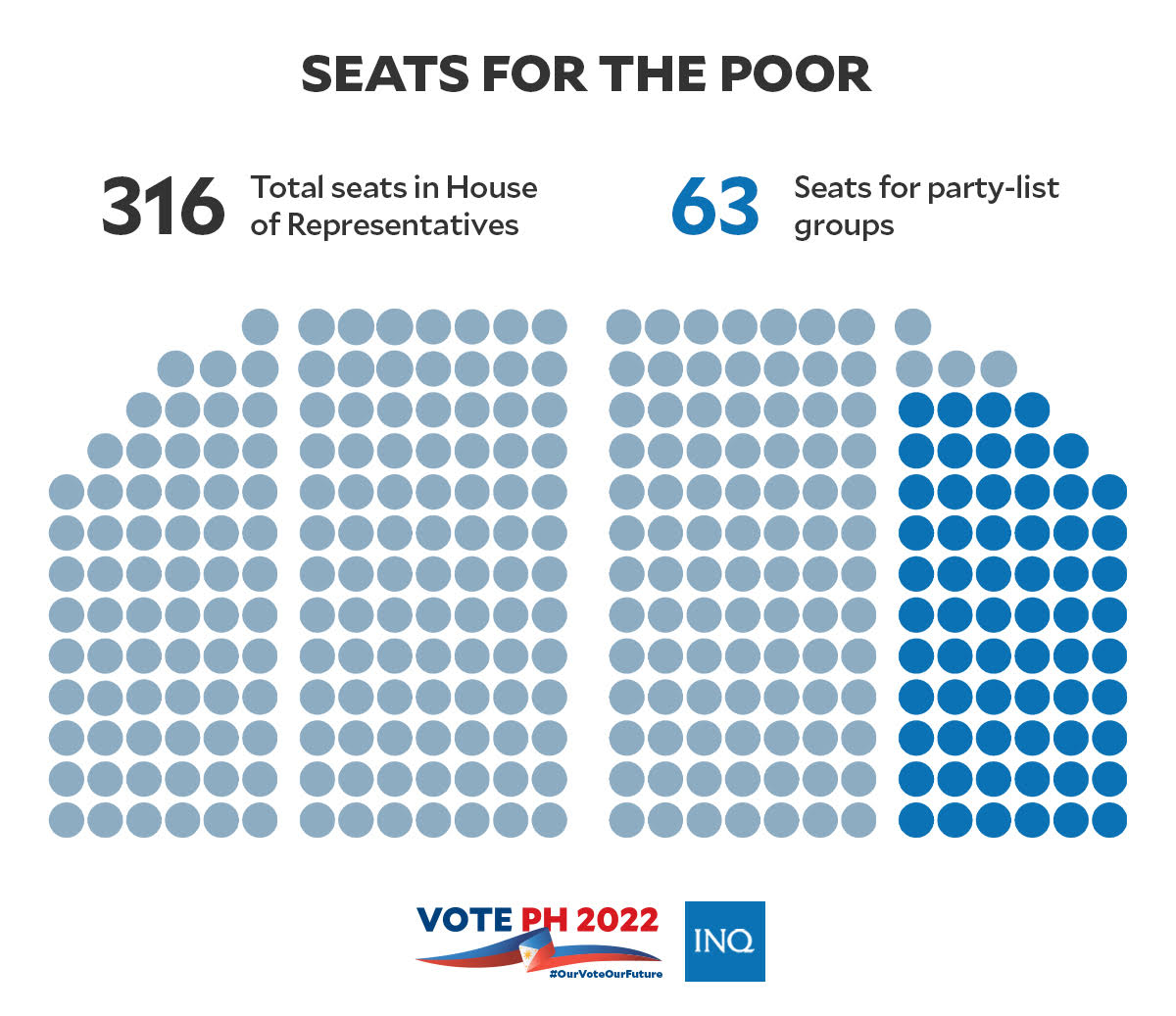 In 2019, a total of 134 party lists ran. These were out of the 185 party lists that were able to file CONA in October 2018. After the elections, only 51 groups were able to gain enough votes for one House seat each. 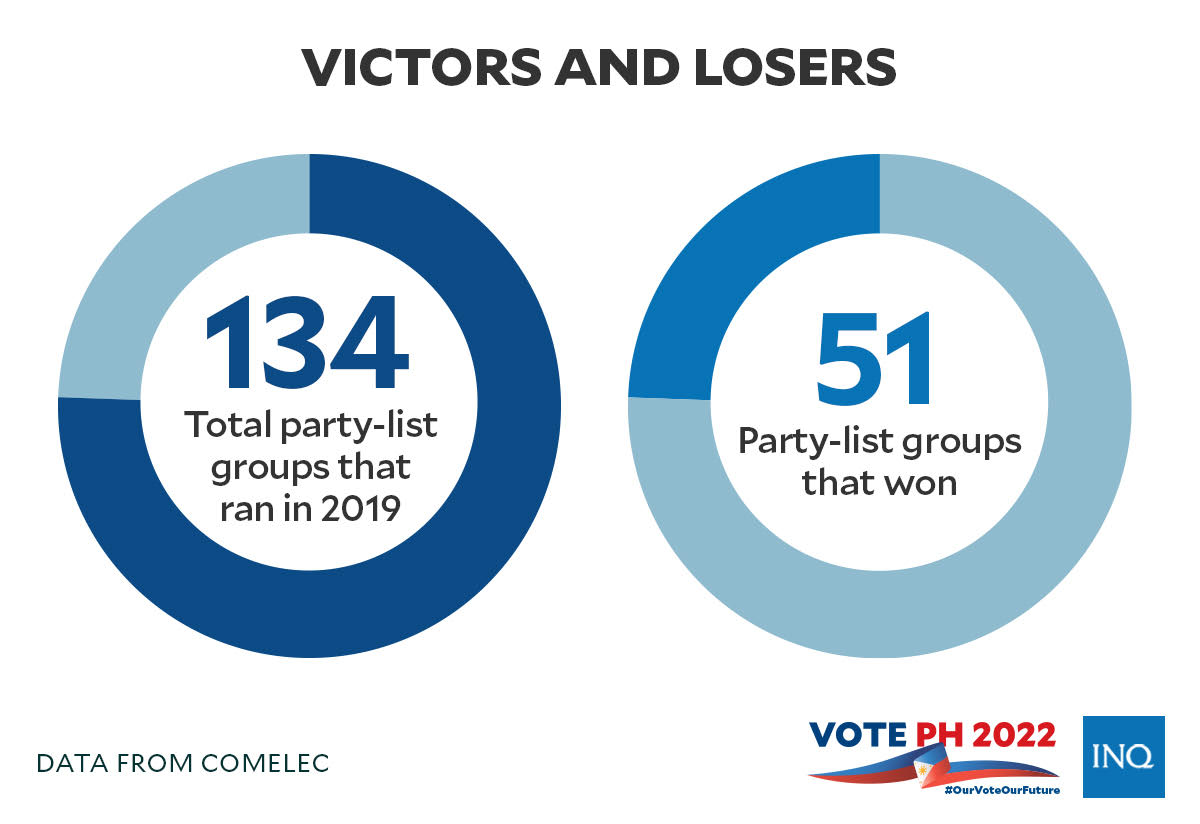 While the Comelec allows party lists to have five nominees as they file their CONA, the House of Representatives allows only a maximum of three seats. 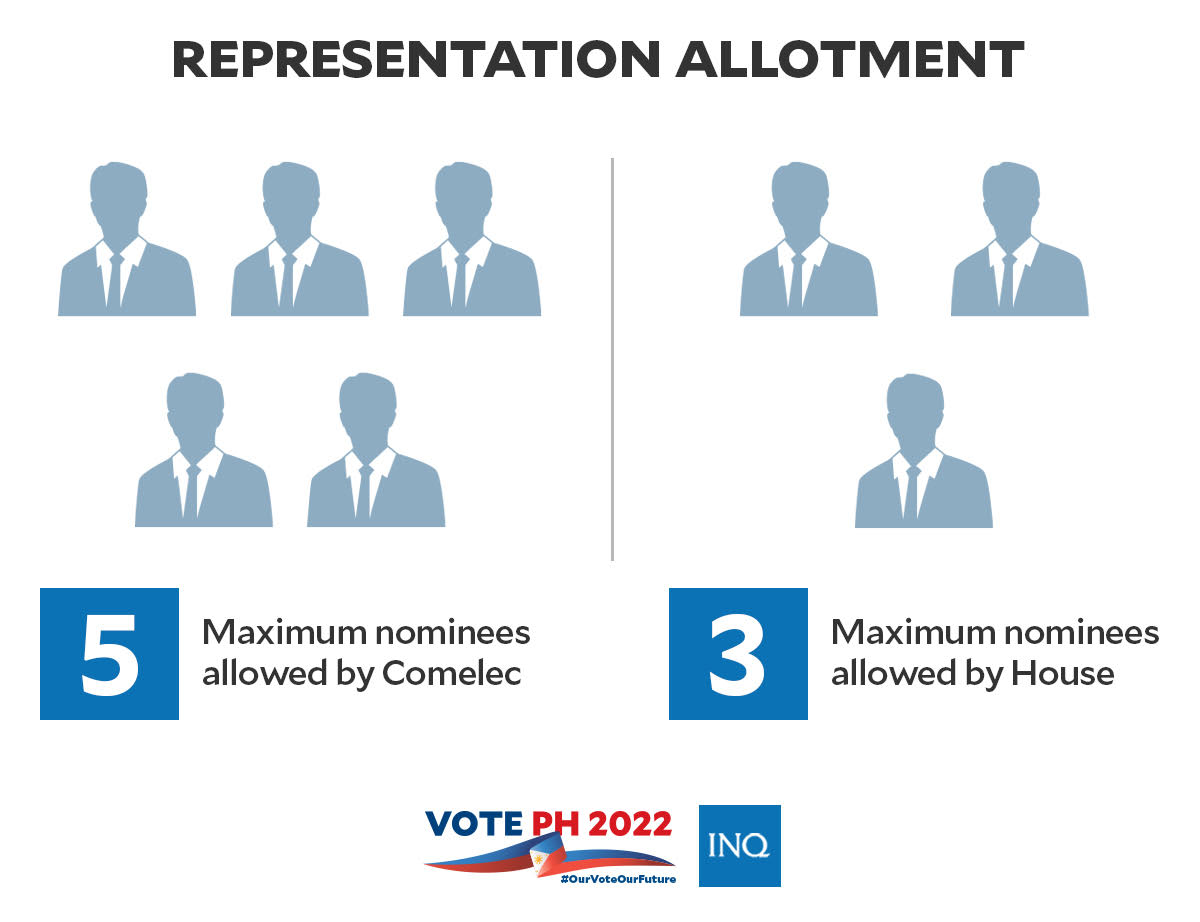 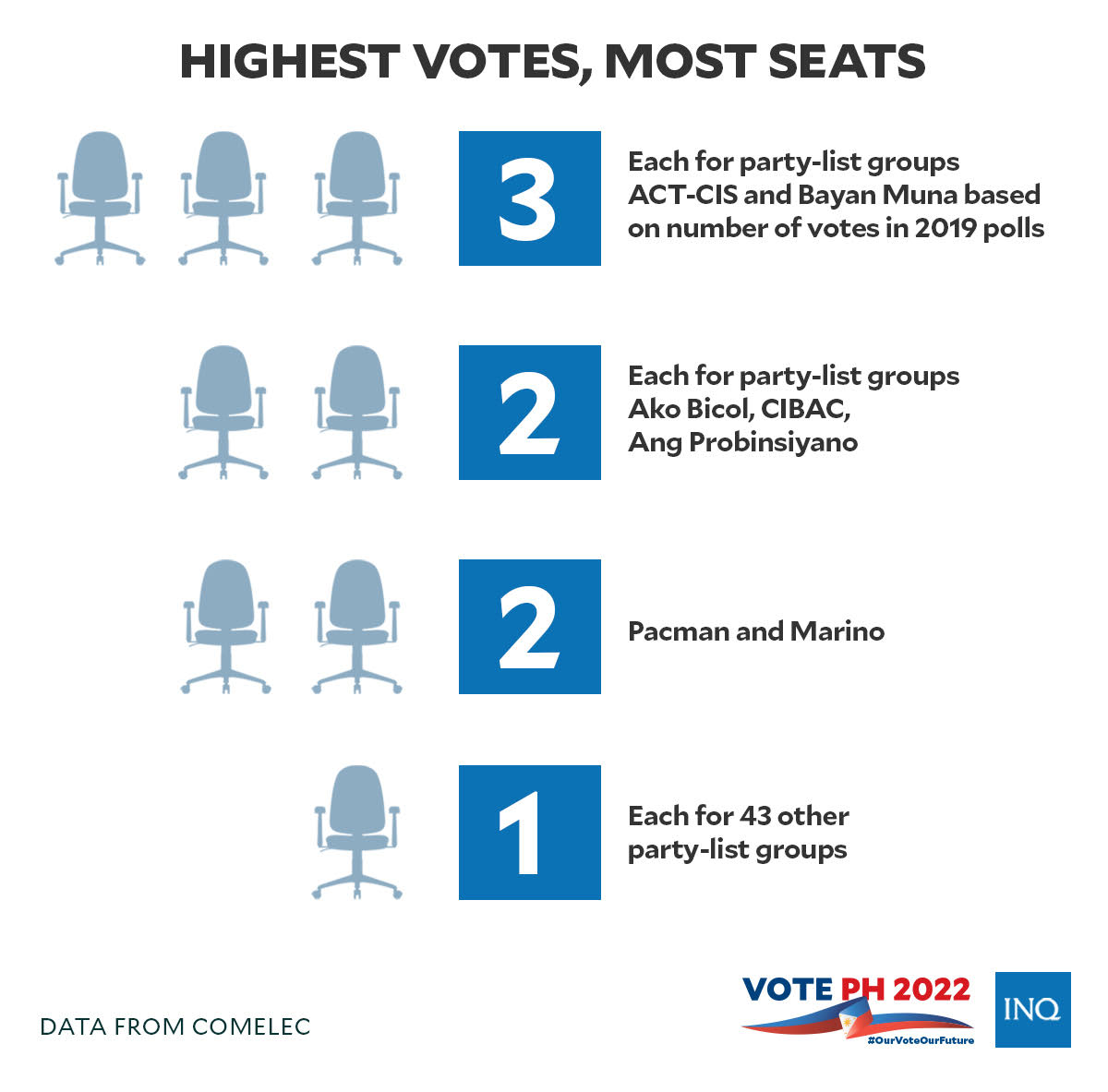 Republic Act 7941 provides that in determining the allocation of seats, the following shall be observed: 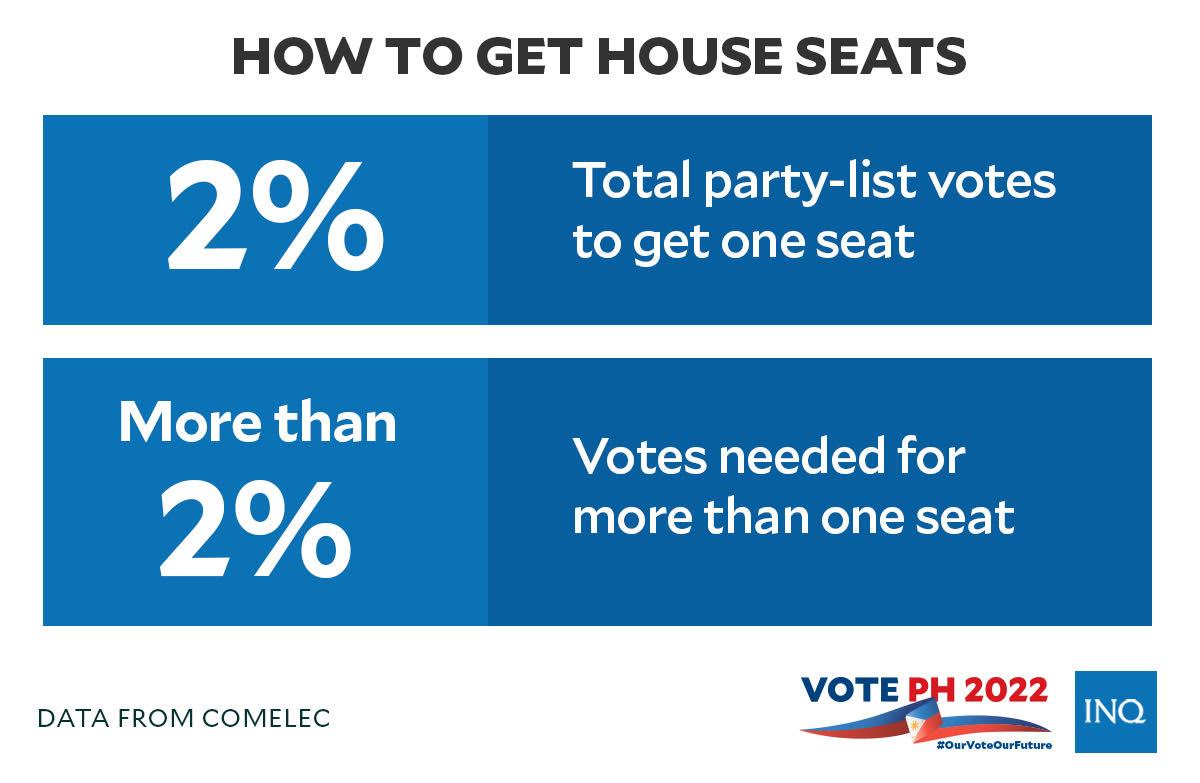