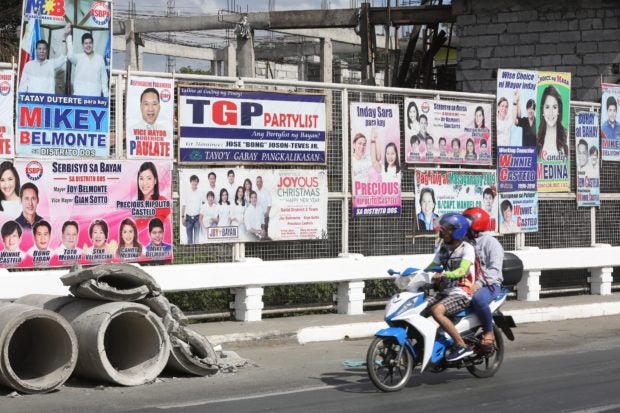 CONSOLIDATING POWER The party-list system has become a mechanism for political dynasties to hold on to power, say poll watchdog groups. Nearly half of party-list groups vying for congressional representation in the May polls have ties with dynasties, business interests or those espousing questionable advocacies. —NIÑO JESUS ORBETA

What was once meant to be a reform measure, the party-list system has “deteriorated” over the last two decades into a mechanism in which those who belong to political dynasties are able to perpetuate themselves in power.

Of the 134 party-list groups vying in the May midterm polls, nearly half, or at least 62 of the groups, have ties with political dynasties, represent special business interests or are running with questionable advocacies, according to election watchdog group Kontra Daya.

The midterm polls should also be seen as a way for the rich and powerful to consolidate their base for the 2022 presidential election, according to Kontra Daya and the National Citizens’ Movement for Free Elections (Namfrel).

When Republic Act No. 7941, which established the party-list system, was enacted in 1995, it meant to provide the marginalized and underrepresented sectors a voice in Congress.

Inspired by the European model, particularly that of Germany, the system seeks to expand proportional representation by including in policymaking groups that felt that their concerns were not being addressed by the government.

It was at the time deemed a reform measure, according to former Akbayan Rep. Etta Rosales, who was one of the pioneer members of the party-list system in the 10th Congress.

“It was program-based. You voted for the party based on its program. It banned turncoatism. It was a measure of reform,” Rosales told the Inquirer on Saturday.

However, two decades later, Rosales said the system had “deteriorated terribly”as it was infiltrated not only by members of political dynasties but also those with business interests and the ultrarich.

One reason the party-list system has become what it is today is a landmark Supreme Court ruling in 2013, which said that parties need not represent “any marginalized and underrepresented sector.”

Among groups with ties to dynasties, businesses or those with questionable advocacies are 1Pacman, whose nominee is Rep. Michael Romero who has a net worth of P7 billion; AA-Kasosyo, which has links to the Pangandamans of Lanao del Sur and was also involved in the P10-billion pork barrel scam.

Kontra Daya convener Danilo Arao said politicos and businessmen infiltrating the party-list system could be detrimental to the public, especially when their proposed policies could trample on the rights of certain groups.

Arao noted that this was because lobbyists would find it “easier” to look for lawmakers to whom they had “compatible interests.”

That’s why it is important for voters to not only scrutinize the track record of the party-list but also of its nominees, Arao said.

He also said that the midterm polls, “just like the recent barangay elections, are preparations for electing into office those who harbor political ambitions in 2022.”

“Partly, it’s a referendum but more on politicians and power blocs consolidating their position and hedging for an expected federal-parliamentary setup and the run-up to the 2022 elections,” Alvia said.

For her part, executive director Rona Caritos of Legal Network for Truthful Elections said that at stake in May were the Duterte administration’s programs and policies.

“If a majority of their candidates win, especially in the Senate, then we could expect controversial bills like the lowering of the minimum age of criminal responsibility to have a smoother passage,” Caritos said.

Read Next
Lacson decries budget ‘insertions,’ wants amendments made public
EDITORS' PICK
On Day 2 of implementation, gov’t says workers now exempt from ‘no vax, no ride’ policy
Gear up and get ready to play with Yamaha Mio Gear
DOH: 28,471 new COVID-19 cases in PH; active cases now 284,458
Metro Manila posts lowest temperature yet this ‘amihan’ season at 19°C
Over 3 Million worth of prizes to be won at Smart Padala’s SENDali Manalo Promo!
Acer starts the year off strong with the Aspire Vero National Geographic Edition
MOST READ
Emma Stone calls Andrew Garfield a ‘jerk’ after he ‘lied’ about his ‘Spider-Man: No Way Home’ appearance
LOOK: Edu Manzano, Cherry Pie Picache enjoy Palawan with her son Nio Tria
Unvaccinated has rights but it has limits—DOJ
Retirements prompting major reshuffle in PH military
Don't miss out on the latest news and information.