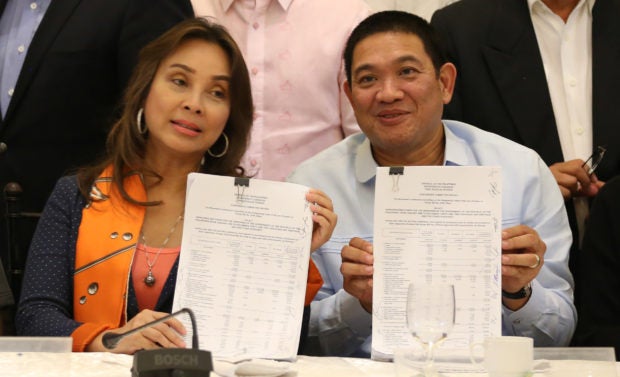 Camarines Sur Rep. Rolando Andaya Jr. on Sunday accused two Cabinet officials of orchestrating the restoration of P75 billion in pork allegedly inserted by budget officials into the proposed 2019 appropriations law but was realigned by lawmakers to their own projects.

Andaya, chair of the House of Representatives appropriations committee, said Budget Secretary Benjamin Diokno and Cabinet Secretary Karlo Nograles were maneuvering for the restoration through the President’s expected veto message on the P3.8-trillion national budget.

“Now that Congress has fulfilled its job in correcting the P75-billion gaffe, Secretaries Diokno and Nograles are back [on] the drawing board to restore it in the 2019 GAA (General Appropriations Act) via a veto message,” Andaya said in a statement.

“This is clear mockery of the power of Congress to scrutinize the budget,” said the former House majority leader.

The Inquirer tried to reach Diokno and Nograles for comment on Sunday, but they didn’t return calls.

Andaya vowed to join Senators Panfilo Lacson and Franklin Drilon in questioning the veto message in the Supreme Court should it reflect the restoration of the P75 billion earlier earmarked for projects under the Department of Public Works and Highways (DPWH).

“In case the two Cabinet members succeed in this evil scheme of vetoing the (general appropriations bill) to restore the P75-billion insertion, I will join Senators Lacson and Drilon in questioning the veto message [in] the Supreme Court,” Andaya said.

Earlier, Andaya accused Diokno of inserting the P75 billion into the DPWH funding under the National Expenditure Program (NEP) to finance projects that would benefit the budget chief’s in-laws.

Diokno has denied the allegations.

The House and the Senate ratified the 2019 spending bill on Friday, the last session day of the 17th Congress, after a contentious conference that lasted several days.

The two chambers agreed to divert the P75 billion in public works funds to other projects to be identified by the legislators themselves.

The President, who must sign the spending bill within 30 days of receipt or else it lapses into law, can veto the entire measure or portions of it.

Lacson, supported by Andaya, had urged the President to veto items that “look and smell like pork”—funding for lawmakers’ projects intended to benefit them politically as well as financially through kickbacks.

In his statement, Andaya said Lacson’s observation that the P75-billion insertion in the NEP was “a conspiracy between the DBM (Department of Budget and Management) and the previous House leadership” was correct.

“I find it interesting how the DBM can maneuver to restore its P75-billion insertion in the final print of the 2019 general appropriations bill,” he said.

He issued an unsolicited advice to his predecessor Nograles, who chaired the House appropriations panel under the leadership of former Speaker Pantaleon Alvarez.

“Be careful with the crafting of the veto message for it will just lead back to where it all started. The public never forgets that you were part of the previous House leadership as chair of the appropriations committee,” Andaya said.

“Both the Senate and the House have realigned the P75-billion DBM insertion,” he said.

“We knew that the funding source for the insertion was clearly pork. The infrastructure projects inserted by the DBM at 4 a.m. of July 22, 2018, were not vetted by the DPWH,” Andaya said.

The House leader, however, was quick to deflect spray from the President.

“The President is not part of the conspiracy between the DBM and the previous House leadership,” he said.

“It will be a great disservice and disloyalty for few Cabinet members to drag the President into this mess,” Andaya said.