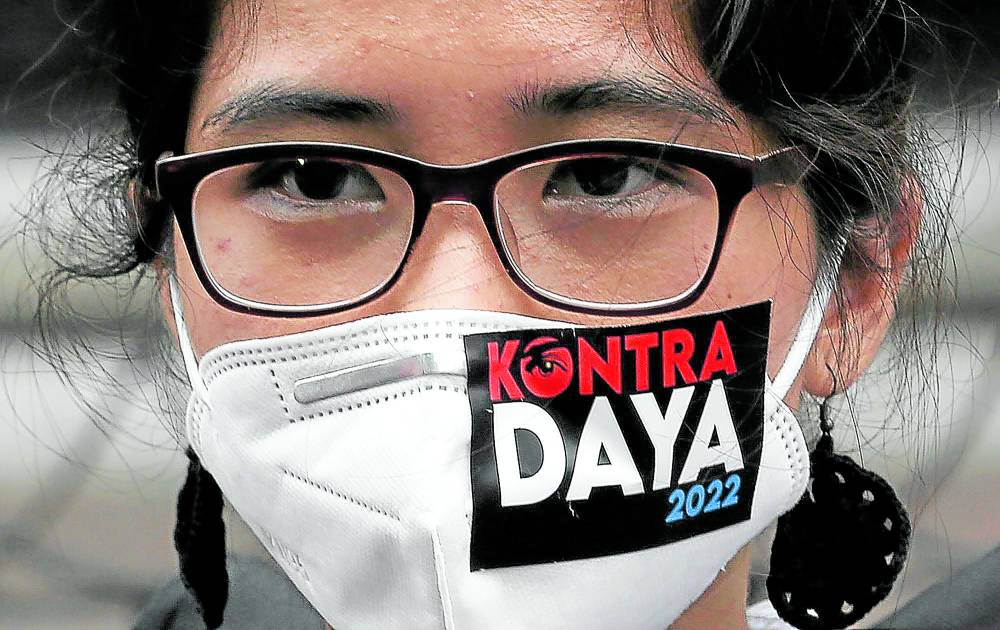 A member of the election watchdog Kontra Daya delivers the group’s message using her face mask, in a gathering outside the Commission on Elections office in Intramuros, Manila. —RICHARD A. REYES/INQUIRER FILE PHOTO

MANILA, Philippines — Far from representing marginalized sectors, the majority of the 177 party list groups seeking at least one sectoral seat in the House of Representatives in the May 9 elections are linked to powerful interest groups, according to the poll watchdog Kontra Daya.

Kontra Daya said that based on its analysis, at least 120, or 67 percent, of the 177 party list groups accredited by the Commission on Elections (Comelec) were either connected to political clans, big business, incumbent politicians, the government or the military; have pending court cases or criminal charges; or have dubious backgrounds.

“The country’s party list system continues to be hijacked by the rich and powerful. Around 70 percent of party list groups are being used as a backdoor to further entrench their political and economic interests,” Kontra Daya said in a statement on Thursday.

Under Republic Act No. 7941, a party list group has to get at least 2 percent of the total votes cast in the party list elections to get one congressional seat.

The top party list groups may have a maximum of three seats each.

There are currently 63 party list lawmakers in the House.

In the last elections in 2019, Kontra Daya flagged 62, or about half of the 134 accredited party list groups, for their alleged links to powerful interest groups.

Among the 177 party-list groups vying in the May 9 elections, at least 44 groups are “controlled by political clans,” the group said.

At least 26 groups fielded incumbent local officials as their nominees and at least 19 groups have pending court cases or criminal charges.

Kontra Daya found at least 34 party list groups to “have unknown or unclear advocacies and representations.”

“Comelec should explain why it continues to allow dubious groups to hijack the party list system, depriving marginalized groups from having a voice at the House of Representatives,” it stressed.

The Comelec declined to comment on the poll watchdog’s findings.

A total of 270 party list groups applied to participate in the May 9 elections.

Comelec rejected 93 of them and accredited 165 party list groups; however, it was forced to include in the official list of candidates 12 rejected party list groups that secured a restraining order from the Supreme Court.

What should have been a 178th candidate party list group that secured a last-minute restraining order from the Supreme Court was no longer included by the Comelec since ballot printing had already begun.

Cardema, 34, ‘not qualified’ as youth rep