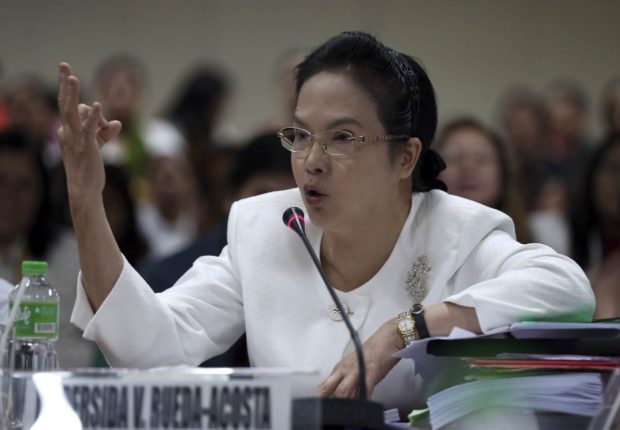 PAO is the principal arm of the government in providing free legal services to indigent citizens pursuant to Section 11, Article 3 of the 1987 Constitution, which states that “Free access to courts and quasi-judicial bodies and adequate legal assistance shall not be denied to any person by reason of poverty.”

“PAO lawyers have been working day and night, even our pregnant lawyers, those with diabetes, they go to police stations, to courts to assist our indigent clients,” Acosta said in Filipino.

She said even the PAO lawyers infected with COVID-19, continue to assist clients virtually.

“It is unfair to generalize our PAO lawyers. Please spare PAO from politics,” she said. Acosta made the statement after senatorial candidate Raffy Tulfo said once elected senator, he will create his own free legal assistance team because PAO lawyers are always absent during inquest proceedings despite high salary.

She said, if PAO lawyers are absent, how come it has served a total of 85,533 indigent clients during inquest investigation and custodial interrogation.

Meanwhile, 33, 756 have been provisionally dismissed while 112,608 were convicted to a lesser offense while 15,371 were granted probation.

“These numbers have names, and records,” she said.

Among the cases handled by PAO in 2021 is the case Anti-Terrorism case filed against two Aeta farmers Japer Gurung and Junior Ramos.

The case has been dismissed by the Olongapo Court.

PAO is also continuously providing assistance to a sickly Filipino-American detained by the Bureau of Immigration.

In 2017, the Supreme Court has adopted a plea bargaining framework in illegal drugs after it declared as unconstitutional a provision under the Comprehensive Dangerous Drugs Act that prohibits plea bargaining.

The high court ruling was handed down on the case filed by Salvador Estipona who was arrested and charged with possession of 0.084 grams of shabu. Represented by PAO, he challenged the constitutionality of the plea bargaining prohibition under the law.

A year after the ruling became final, the Supreme Court issued a circular for the implementation of the plea bargaining framework.