Marcos, Duterte get backing of political clans in vote-rich Cavite

GENERAL TRIAS, Cavite, Philippines — Less than two months before the national elections, Ferdinand “Bongbong” Marcos Jr. and Inday Sara Duterte-Carpio secured the support of some of the largest political families in vote-rich Cavite, which they visited on Tuesday.

In the morning, Cavite Gov. Jonvi Remulla arrived ahead of the tandem at the San Juan Covered Court in Dasmariñas, where he kept the crowd occupied by hosting a talent showdown.

Remulla, who is seeking reelection, has endorsed the Marcos-Duterte tandem, which continued to lead in the presidential and vice presidential race based on the latest Pulse Asia survey.

“I asked them to come back,” Remulla told reporters when asked why the tandem was visiting the province for the second time.

“Cavite has something to prove… Cavite is the epicenter of Philippine politics. Where Cavite goes, the country goes.” 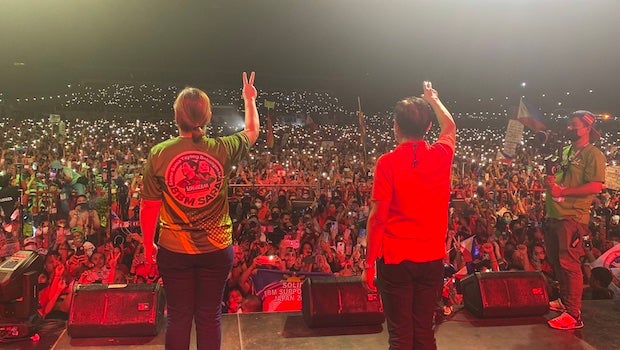 It is not just the Remullas who pledge support for the Marcos-Duterte tandem in Cavite.

Sen. Bong Revilla, the co-chairperson of the Lakas-CMD party that is carrying the vice presidential bid of Duterte-Carpio, also joined the rally in Dasmariñas. The tandem, he said, is “assured of a big win in Cavite.”

The Marcos-Duterte tandem also secured the support of the Tolentinos from the Eighth District.

Sen. Francis Tolentino also showed up in the Marcos-Duterte events in Cavite and campaigned for the tandem.

“Many governors are asking and finding it difficult to decide who they will vote for,” Tolentino said in Filipino. “Now it’s clear that many governors will support [Bongbong Marcos] for president and Mayor Sara Duterte for vice president.”

Tolentino is a member of the ruling PDP-Laban party, specifically the faction led by Energy Secretary Alfonso Cusi. On Tuesday, that faction endorsed the presidential bid of Marcos.

The Cusi wing had also earlier adopted Duterte-Carpio as its vice presidential candidate.

According to Gilbert Remulla, there are other prominent political families in Cavite that are backing the Marcos-Duterte tandem — such as the Ferrers from the Sixth District and the Barzagas of the Fourth District.

“Not only the political machinery of Cavite is united but even the citizenry through the numerous parallel groups that have signified support for the UniTeam. Expect a massive landslide victory for BBM-Sara,” Governor Remulla said.

He also claimed that they were counting on the support of majority of the mayors of 16 towns and eight cities of the province — among them, Bacoor, Cavite, Imus, General Trias, Trece Martires, and Tagaytay.

Cavite is the second most vote-rich province nationwide with over 2.3 million voters, according to the
Commission on Elections.

Meanwhile, Duterte-Carpio expressed her appreciation for  supporters in Cavite.

“Thank you for the hours and the opportunity that you gave us now to get to know you and be with you and give you all a message,” she said in Filipino.

“If you choose us, we will carry the entire nation without color — no pink, no yellow, no red, no green. There will be only one color — Filipino who are not quarreling, industrious and brave like the Caviteños. We are all industrious.”